A job fair has been scheduled for Sprouts Farmers Market in Riverview, set to open in November near the intersection of Summerfield Crossing Boulevard and U.S. 301.

“We ask that applicants bring their resumes,” Sprouts spokesperson Kalia Pang said, in a Sept. 23 telephone interview. “We will conduct onsite interviews, and people could potentially be hired at the job fair, depending on the available opportunities and how well the [process] goes.” 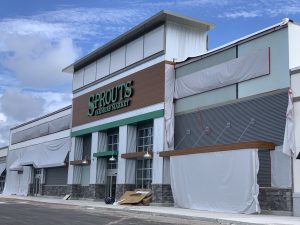 The Sprouts Farmers Market at 12960 South U.S. Highway 301 is set to open Nov. 13. A job fair for employment is set for Oct. 2 and 3, at Embassy Suites by Hilton Tampa/Brandon.
LINDA CHION KENNEY PHOTO

Store No. 623, at 12960 U.S. 301 South, is set to open Nov. 13 at 7 a.m., with details for the Riverview grand opening soon to be announced. The store neighbors the year-old Texas Roadhouse restaurant and the newly opened James A. Haley Veterans’ Hospital South Hillsborough Outpatient Clinic. The clinic, at 12920 Summerfield Crossing Blvd., is set to serve some 10,000 veterans in the Riverview, Ruskin, Sun City Center, Gibsonton and Apollo Beach areas.

According to Pang, the layout of the upcoming 30,000-square-foot Sprouts Farmers Market is similar to other nearby locations, including the Valrico, South Tampa, Dale Mabry South and Carrollwood stores.

“There’s farm fresh produce in the center of the store, which we’re famous for, and throughout the store, fresh, natural and organic products,” Pang said.

According to Sprouts officials, 90 percent of the company’s 19,000 healthy products are natural or organic; moreover, products for sale include thousands of gluten-free, plant-based, grass-fed, non-GMO and raw items. The company has more than 24,000 Sprouts-brand products that reportedly meet stringent ingredient standards.

“Bulk foods are a great way to shop at Sprouts,” Pang said, with barrels full of grains, nuts and sweets. The full-service Market Corner Deli, she added, “offers made-to-order sandwiches, a salad bar and other ready-to-eat options.” An in-house butcher is set to prepare handcrafted sausages daily.

Recognizing that “what you put on your body is just as important as what you feed your body,” the company offers both a “wide selection of natural body care products” and an “expansive vitamins and supplements department,” Pang said.

As for community outreach, she added that the Sprouts Healthy Communities Foundation offers grant support to “local nonprofits that promote nutrition education and healthy eating choices for children and families in the neighborhoods surrounding our stores.”

The application process reopens in the spring.

According to a company news release, Sprouts “has paved the way for numerous niche brands, many of which were first carried by Sprouts.” In all, there are 15 Sprouts locations in Florida, including the upcoming Riverview and Jupiter stores. The latter is set to open in October.

Sprouts traces its roots to Henry Boney who, in 1943, opened a fresh-foods fruit stand in San Diego. In 2002, his son and grandson, Stan and Shon Boney, opened the first Sprouts Farmers Market in Chandler, Arizona. Through acquisition and expansion, the company today has more than 320 stores nationwide.

Foundation information — including grant applications and the newly named grant recipients, expected to be announced soon — can be found at about.sprouts.com/sprouts-foundation. For more on Sprouts job openings, visit about.sprouts.com/careers. For non-managerial roles, call 1-866-925-2396.