The Spoto Spartans was the lone South Shore high school football team to register a victory last Friday night, as East Bay, Riverview and Lennard all bit the dust.

Spoto, under first-year head Coach Cassius Crawford, secured its first win of a 1-5 season by beating the hapless 0-6 Brandon Eagles 26-12 on the Spartans’ home field. Spoto now travels to Tampa to go up against 2-3 Blake this Friday, Oct. 4, in a 6A District 10 battle.

East Bay opened fast but faded fast against powerhouse Tampa Bay Tech in Tampa last Friday. Coach Frank LaRosa’s Indians actually led the Titans 8-0 before succumbing to an overwhelming offense and defense in a 51-8 rout. The Indians’ Kameron Washington put the visitors from Gibsonton on the scoreboard first with a 6-yard touchdown run. East Bay did not do much after that, however. LaRosa told the news media, “We played 13 minutes of good football by running the ball, controlling the clock and keeping their playmakers off the field.” But, he pointed out, the Indians could not sustain those three objectives for the rest of the game. Next up for East Bay is the Sickles Gryphons on Oct. 4 at the Indians’ stadium.

In a clash of other Hillsborough County powers, Newsome outscored Riverview Sharks 42-28 at the Sharks’ field as the Sharks tumbled from the ranks of the unbeaten. Now 5-1, Coach William Mosel’s fish is expected to take out revenge at home Friday against the lowly 0-6 Leto Falcons. Look for Sharks sophomore QB Stazion Gage to bounce back from the defeat.

Lennard travels to 2-3 Durant in eastern Hillsborough County this Friday night, desperately looking to snap a two-game losing streak after winning its first three games of the football season. The Longhorns next home game is against the Ridge Community Bolts of Davenport on Oct. 11. 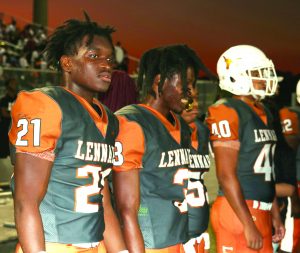 Coach Matt Kitchie’s Horns dropped an offensive battle 41-29 to the Riverview Rams of Sarasota at the Ruskin corral last Friday night. The Rams ran its record to 5-1, and Lennard fell to 3-2 in front of a large contingent of Lennard fans. Lennard jumped out in front of the Rams but could not hold on as Riverview’s running back Traynon Hall and QB Sean White proved too much for Longhorn defenders.

Lennard, in particular running back Tino Hunt, piled up plenty of offensive yards but gave too many opportunities to the resourceful Rams. Hunt, the perennial workhorse, toted the pigskin 29 times for a whopping 246 yards on the ground. Combining speed, power and elusiveness, senior Hunt scored three TDs and one big chunk run of 30 yards. His companion in the Lennard running arsenal, junior Quay Smith, picked up 93 yards on 16 carries, including a long run of 25 yards and a TD. Smith was also on the receiving end of a spectacular bomb on the opening offensive play of the game as QB Gavin Henley hit the speedster on a 40-yard pass play, which led to Lennard’s first score. Lennard’s Jocelyn Diaz continued her good work kicking extra points, hitting 3 for 3.

Selected as Players of the Game for Lennard were Hunt on offense and overall, Kourtland Mitchell on defense and Davian Papias on special teams. 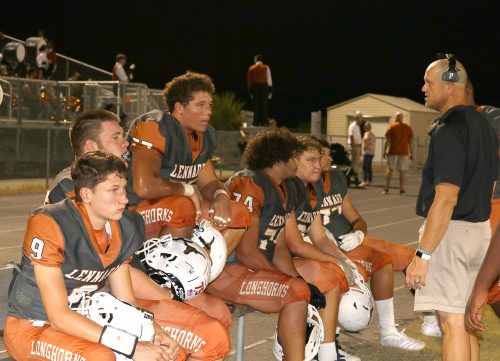