Home News Last in a series on the Ag Museum
News

Last in a series on the Ag Museum 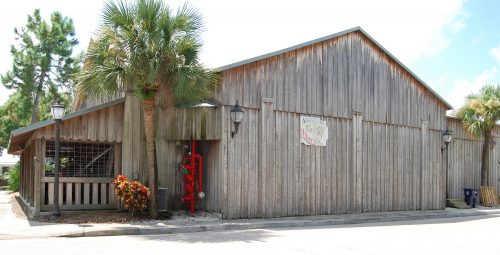 The Manatee County Agricultural Museum in Palmetto opened in March 2002 and is located at 1015 Sixth St. W. The building is in the northwest corner of the Palmetto Historical Park and was the location of the City of Palmetto’s public works, police, and fire departments before being leased to the Manatee County Agricultural Museum Inc. board of directors.

Last in a series.

Agriculture has been an important part of Manatee County’s heritage. “Our history is agriculture in Manatee County,” said Diane Ingram, supervisor of the Manatee County Agricultural Museum in Palmetto. “That’s why people settled here: to establish themselves, to raise tomatoes and oranges and make a living.” 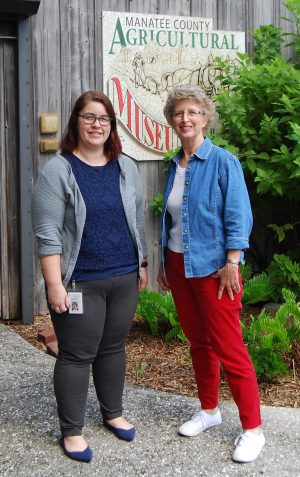 Melissa Morgan, left, has been the curator of the Manatee County Agricultural Museum for five years; museum supervisor Diane Ingram, right, will be celebrating her 18th year with the museum in December.

According to the county website, “agriculture production is second only to tourism in its economic impact on Manatee County. The annual impact of agriculture to the county’s economy is estimated at over $500 million.”

This includes not only produce and cattle but all of the auxiliary businesses, such as feed stores, packing houses, rail roads and processing plants like Tropicana, said Melissa Morgan, curator at the museum for the past five years.

So, with all the heritage and economic importance of farming and ranching, it was no wonder government officials and community leaders began talking about an agricultural museum in 1979 when there were discussions on expanding the Manatee County Extension Services offices at the fairgrounds in Palmetto.

But those plans fell through, and the idea went dormant until 1985, when the Palmetto Historical Commission received a state grant to do a survey on historical preservation in Palmetto. The survey showed a high interested in preserving the county’s agricultural heritage, and in 1987 the commission established a committee to look into the idea of an agricultural museum. “People started collecting artifacts, equipment and tools from garages, storerooms and attics all over Manatee County and had so many they decided they needed a building,” Ingram said.

In 1989, the committee became the Manatee County Agricultural Museum Inc., a 501(c)3 non-profit organization. The new organization set out to find a suitable location for a museum building. After years of looking, in 1995 the City of Palmetto public works, fire station and police building became empty when those city departments moved to other buildings.

“This seemed like the natural place to put an agricultural museum because there was already the start of the Palmetto Historical Park,” Ingram said.

At the time, the park, located at 515 10th Ave. W, had the Carnegie Library, the Heritage Post Office, the schoolhouse, and Cypress House. The city public works building was in the northwest section of the park. After discussion with the city officials, in 1997 the Palmetto City Commission approved a 50-year lease for $1 a year, with a renewal clause for another 50 years. 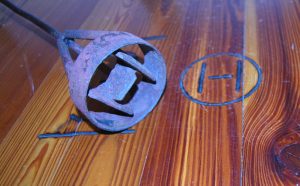 Branding marks of area ranches are imprinted into the floor of the Livestock gallery in the Manatee County Agricultural Museum. The gallery features exhibits and displays explaining the history of ranching and husbandry in Manatee County.

Refurbishing the building was estimated to cost $75,000, and the committee went to work raising that amount. “A big boon was a $250,000 matching grant from the state,” Ingram said. The residents of Manatee County came through with a big help of several individuals and groups, including a $75,000 grant from the Bradenton Kiwanis Club Foundation and $50,000 from the Dan McClure Family.

An addition was added along the whole south and west sides of the original building, more than doubling the space. The building was constructed of cement block, so “barn wood” siding was added to create the farm/ranch building appearance.

Everything was moving along, but the museum commission realized they needed a manager to coordinate everything. Ingram was hired in December 2001 as part-time manager and tasked with getting the museum opened.The Manatee County Agricultural Museum was opened in March 2002.

Ingram became the fulltime supervisor in October 2002. She had moved from New Jersey to Florida in 1982, and moved to Palmetto in 1993. With a degree in social work from Monmouth College in New Jersey, Ingram’s background was working for a non-profit adoption agency in Florida. 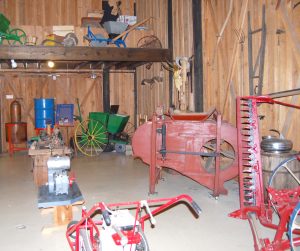 “When we moved to Palmetto, I was able to stop working to be at home with (my) children,” she said. Ingram and her husband, Michael, have two grown children, Claire, 30, and Wade, 24.

When the children were older and in school, she decided to go back to work and found the museum supervisor position was available. “They weren’t looking for someone with museum experience but for someone who worked with boards of directors and non-profits, which I did,” Ingram said.

For the first five years she worked alone; then the board hired an assistant who worked with Ingram for eight years. When that assistant left, about five years ago, Morgan came to the museum as a curator. Originally from Jacksonville, she was working in Washington, D.C., when she took the curator job at the Agricultural Museum. “I wanted to come back to Florida,” Morgan said. “I loved DC, but this is closer to Jacksonville and family.”

She has a bachelor degree in history from Flagler College in St. Augustine and a masters degree in museum studies from George Washington University in Washington, D.C. “I worked at a lot of other museums and interned at the Smithsonian,” said Morgan, who lives in Bradenton with her husband, Jordan.

The museum is operated under an inter-agency agreement with the Agricultural Museum Commission, City of Palmetto, Manatee County Clerk of the Circuit Court office, and Palmetto Historical Commission.

The Historical Resources Department of the county clerk’s office manages five historical parks and museums, including the agricultural museum, each under the direction of a separate board of directors. 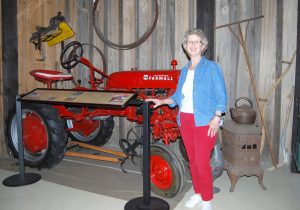 Diane Ingram, supervisor of the Manatee County Agricultural Museum, stands next to the Farmall Cub tractor in the Barn gallery of the museum. The International Harvester brand tractor was introduced in 1947 to fill the gap in the market for less expensive, yet powerful tractors for small farmers.

Although the museum is within the Palmetto Historical Park, the agricultural museum is a separate organization with its own board of directors, Ingram said. “We collaborate a lot on exhibits, programs and events but do many on our own,” she added.

The agricultural museum has several galleries, such as the Livestock Room, where the history of ranching and husbandry is explained through exhibits, and the Barn, with vintage and antique agricultural equipment.There also is space for temporary exhibits and displays.

The museum has a small cadre of volunteers, about four people who come in and help with data entry, collection archiving, front desk reception and during events with preparations. Plus there are a lot more volunteers who work just during events

Ingram said a lot of students from high school clubs volunteer at the Ag Museum. And adult service clubs, such as North River Kiwanis, the Ellenton/Parrish Lions and Manatee Riverside Rotary, also help out during events.

The big events of the year at the Ag Museum, in collaboration with the Palmetto Historical Park, are Palmetto Heritage Days in March, Christmas in the Park in December and the Halloween Social, which is on Oct. 19.

At the Halloween event, there will be trick-or-treating, crafts, games, face painting, a Shark Encounter in the Ag Museum and a costume contest, along with other surprises. Ag at Night was a new event series held this year at the agricultural museum. This series of evening events for adults featured interactive stations throughout the museum dealing with a specific theme, such as the benefit of pollinators. One of the museum’s larger fundraising events is the Night for the Museum, which is a casual gala dinner with live and silent auctions. 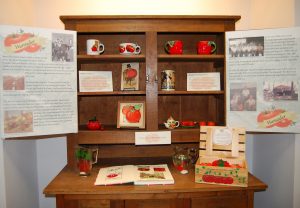 A small portion of a larger collection of tomato-related items is on display in the Vegetable and Fruit gallery of the Manatee County Agricultural Museum. Jan Hunsader, whose family owns Hunsader Farms in East Manatee County, found the items at antique shops, flea markets and retail stores over many years.

Funding for the museum comes from several sources.The clerk of the court office pays the salary and benefits for Ingram and Morgan and provides about $9,000 of support dollars, which goes to program supplies, computers, office supplies and IT support.The City of Palmetto, which owns the building, pays for the electric and water bills, plus does the yard maintenance and mechanical and building repairs. “That’s a huge chunk,” Ingram said. “We also write grants for special projects and equipment.”

A big part of the museum’s educational component is the children’s field trip for K-5th grade program during the school year. Hundreds of children each year participate in this museum program in collaboration with the historical park. “It’s so hands-on the kids don’t know they’re learning,” Ingram said. “They learn where food comes from, what grows in Manatee County and about the agricultural heritage, like cowhunters.” Historical park supervisor Amanda Polsen and park curator Tori Chasey also provide hands-on lessons on the pioneer life in Manatee County. 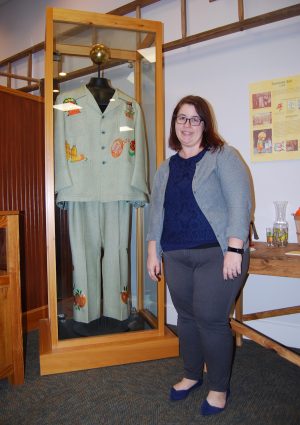 Melissa Morgan, curator at the Manatee County Agricultural Museum, stands next to one of her favorite items in the museum’s collection, the Tropicana Suit. The c. 1970 embroidered suit is decorated with images reflecting Tropicana. Charles Johnson, director of public relations for the Bradenton orange juice company, wore the suit to company and community events. Johnson retired from Tropicana in 1979.

In addition, the “Super Sprouts” program for pre-K is held five times a year These young students play a harvest gathering game called “What’s Before the Grocery Store” where they learn where their food comes from. They also make butter, plant seeds and have a story time.

A popular program started this summer was “Make It, Take It.” Families came to the museum on Tuesdays and Thursdays in July for a self-guided tour of activity stations, each with a learning component, throughout the museum. For example, one day they learned about the life cycle of butterflies. Another day they planted beans and learned about the life cycle of plants. “It’s been a very successful summer program that we want to repeat next year,” Morgan said.

One thing Ingram and Morgan would like in the future is to expand the staff. “There’s just not enough hours in the day for the two of us to do what needs to be done, let alone what we want to do,” Ingram said.

The Ag Museum is open Tuesday through Friday and the first and third Saturday of the month from 10 a.m. to noon and 1 p.m. to 4 p.m.

For more information check out the museum’s website at www.manateecountyagmuseum.com, send an email to agriculturalmuseum@manateeclerk.com or call 941-721-2034.

Recent driver fatality shakes up SCC community, and it should