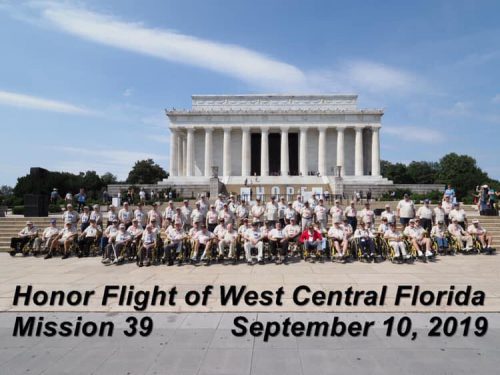 On Sept. 10, flying from the Saint Petersburg Airport, Honor Flight number 39 departed for Washington, D.C. Diane Fraind, guardian, traveled with Freedom Plaza Veteran Bill Ciata, and John O’Brien was accompanied by his son, Shawn O’Brien. The Honor Flight for these locals was made possible through a grant provided by the Interfaith Council, with the assistance of Retired Officers’ Corporation (ROC) and Military Family Support Trust (MFST).

The acknowledgments, cheers and well wishes expressed by the crowd for all 69 veterans on the mission were very gratifying and appreciated. They visited the World War II, Lincoln, Vietnam, Korean and Air Force memorials and were given an overview of the Arlington Cemetery, the Capital Building and the Washington Monument. It was impressive, if not amazing, how well orchestrated the itinerary was to fit everything into a single day’s trip.

“On our return to Saint Petersburg Airport, the welcoming party was very exciting, touching and quite overwhelming with emotion. I highly recommend this trip to all veterans, from all measures of service, and encourage others to apply to be their guardians. It was the most rewarding experience of my life,” said Fraind.

The MFST routinely provides funding for the Honor Flight guardians. It is a 501(c)3 organization that supports through its grant programs, military families. If you would like more information on making a donation to MFST, contact Lori Germain at 813-634-4675.

The Honor Flight Network program was conceived by Earl Morse, a physician assistant and retired Air Force Captain. Morse wanted to honor the Veterans he had taken care of for the past 27 years. In May of 2004, the World War II Memorial was finally completed and dedicated in Washington, D.C., and quickly became the topic of discussion among his World War II Veteran patients. The inaugural Honor Flight took place in May of 2005. Six small planes flew out of Springfield, Ohio, taking twelve World War II Veterans on a visit to their memorial in Washington, DC. Today, the program has 127 hubs in 41 states
Honor Flight of West Central Florida, Inc. was established as an official regional hub of the Honor Flight Network in October 2010. Its purpose is to recognize American Veterans for their sacrifice and service by flying them free of charge to Washington, D.C., to visit and reflect at the memorials dedicated in their honor. Top priority is given to World War II and terminally ill Veterans. Honor Flight is committed to fly Veterans from the Korean, Vietnam, Gulf Wars and others.
The Honor Flight at Home Program is also available for Veterans who have reached a stage in their life that flying to Washington D.C. is no longer an option. This program is held in the local area.
Of all of the wars in recent memory, it was World War II that truly threatened our very existence as a nation — and as a culturally diverse, free society. According to the Department of Veterans Affairs, an estimated 640 World War II veterans die each day. Our time to express our thanks to these brave men and women is running out.
The Honor Flight’s mailbox needs to be filled again for the next flight. Help them fill it up with thank you cards, letters and notes for the Veterans. Mail call is an important part of each Honor Flight Mission. It’s so easy to let our heroes know you appreciate them and all they have done for our country. Show your love and gratitude by helping them fill up their mail call supply. Spread the word to your family and friends, schools, civic and church groups etc. They will be flying 75 to 80 Veterans per flight, so that’s lots and lots of mail.
Send mail to:
Honor Flight of West Central Florida
P.O. Box 55661
St. Petersburg, FL 33732
The public is invited to join in welcoming the Veterans home from the Mission 40 at the St. Petersburg Clearwater Airport on Oct. 22 as part of the Welcome Home Celebration.
For more information, visit www.honorflight.org or follow it on Facebook at www.facebook.com/Honor.Flight.WCF/ 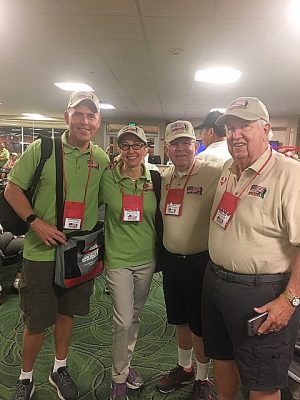 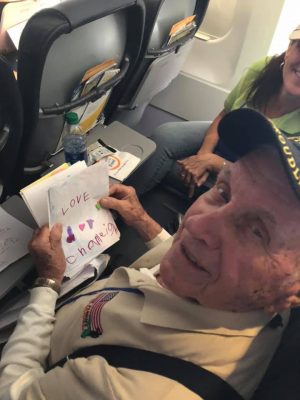 Mail call is an important part of each Honor Flight Mission. The Veterans receive letters, post cards and notes from the community expressing their gratitude for their service to our country. 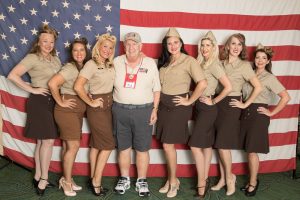 Photo by Sean Neumayer
What a way to conclude a long day: a photo with the Bomber Girls. 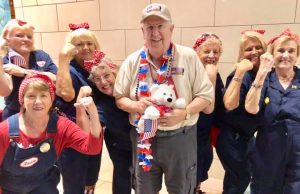 That is a whole lot of Rosies’ 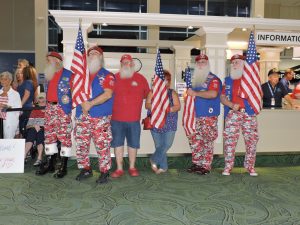 The support for these returning veterans was everywhere you looked. 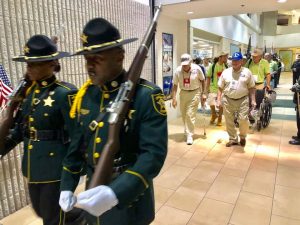 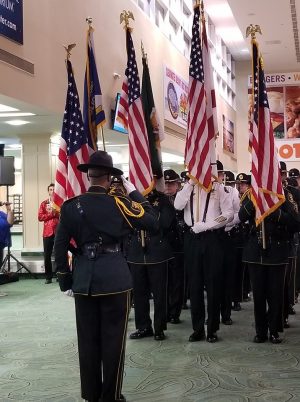 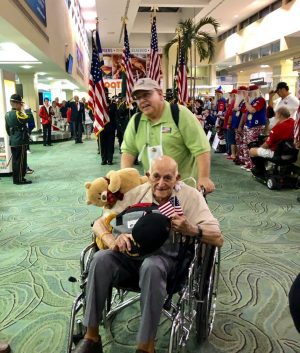 Last in a series on the Ag Museum