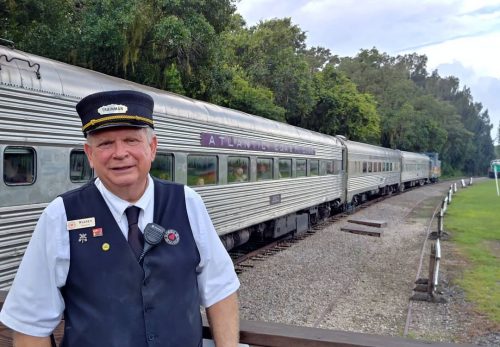 Sundance resident Warren Langer is the newest volunteer conductor at the Florida Railroad Museum in Parrish. He oversees the actual operation of the train and is responsible for the safety and well being of all passengers.
GLEN MILEY PHOTO

The retired Methodist minister is a Keller Williams real estate agent and health coach, who not only helps folks find the right home but also the right natural products to restore and maintain their health.

As a boy growing up in Cleveland, Langer loved trains. He had and still has a model railroad. It is no surprise that four years ago when he and his wife took their grandson to the Florida Railroad Museum in Palmetto to ride a train, Langer came home committed to volunteering for the nonprofit organization.

He started out as a car host sharing railroad history. Then he became a trainman responsible for hooking cars and checking mechanical issues and brakes. In August, he was certified as a conductor, the final authority on the train. The entire process takes three to four years to complete, he said.

“I’m responsible for the safety and well being of all passengers on the train, which can be up to 500,” he said. “I also decide disputes and handle problems with equipment. I oversee the actual operation of the train.”

The conductor said trains at the Florida Railroad Museum must meet the same safety codes regular trains do. The cars and tracks are inspected regularly.

The actual right of way giving access to the trains in Palmetto is owned by Florida Power & Light, which allows the nonprofit group to use it as long as the tracks are maintained. Langer said it costs between $150,000 and $200,000 annually to maintain 6.5 miles of track. That’s in addition to 1,500 ties per year that are replaced at $60 apiece.

The Florida Railroad Museum offers old- fashioned train rides at 11 a.m. and 2 p.m. Saturday and Sunday. The general admission excursion trains operate rain or shine on a 13-mile round trip lasting about an hour and 20 minutes.

Some of the rides have exciting themes, like the murder-mystery dinner train, Civil War re-enactment, Hole in the Head Gang Train Robbery and more. Some appeal especially to kids, including Day Out with Thomas (the Train); the Cotton Tail Special; and the North Pole Express.

Langer wants the public to know that while trains are an important part of America’s past, they are equally important to our country’s present and future. “The media gives the public the impression that railroading is a dying industry, and nothing is further from the truth,” he said. “Seventy-five percent of everything shipped in the U.S. spends part of its time on a train.”

Commuter trains have been in use over the past 20 years in South Florida, and Orlando has had its own busy commuter train for the past four years. In the first quarter of 2019, SunRail averaged 6,362 paying riders per weekday. Currently, a new rail system is being built from Miami to Orlando to Tampa, Langer said.

He added that he and his wife ride AmTrak to visit their daughter in Boca Raton, paying a $28 fare. The train is always full and features a snack car and WIFI. “It’s great for cruise people who sail out of Miami and don’t want to have to park and leave their cars there.”

If you’d enjoy an experience more reminiscent of railroading’s past, visit the Florida Railroad Museum at 12210 83rd St. E, Parrish. Its focus is not only on railroad history but also on the history of the area.

Is it time to reinvent?