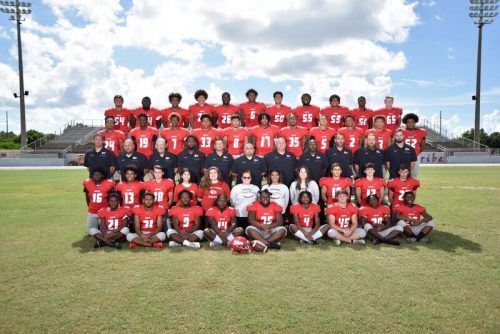 Coach Frank LaRosa and his Indians had no miracle finishes for Gaither in Tampa last Frday, losing 39-15 to the Cowboys. Gaither goes 4-0 and the Indians drop to 1-3 with a game at home this Friday against 1-3 Plant City. Under Coach Jamers Booth, Plant City opened the season beating Jesuit 37-29 but has fallen on unusual hard times since then. The 7A-7 Raiders from eastern Hillsborough County has lost three straight: 55-19 to Lakeland, 28-23 to Gaither and 26-14 to Tampa Bay Tech.

In its last-second win over Jefferson, 7A-8 East Bay notched its only win of the season on a successful last-second two-point conversion. Against the unbeaten Gaither Cowboys of Coach Kris Karsen, it would have required a 27-point conversion. Problem is, there is no such thing in football. The Indians settled for another two-point conversion after its second and final TD of the game in the fourth quarter, but it was way too little and way too late. The unbeaten Cowboys featured one of Hillsbrough County’s top high school passers in Toany Bartalo and a bevy of talented receivers as they showed that they are contenders for the 6A-6 title.

Bartalo accounted for 291 passing yards on 14 for 23 completions and five TDs against the Indians. The Cowboys’ Devon Knighton grabbed 7 for 91 yards and a pair of scores. For the season, the senior slinger Bartalo has 1,107 yards passing with 17 TDs in four games.

“Coach (Frank) LaRosa does a great job,” Gaither Coach Karsen told media in post-game comments.. “They’re a physical football team, and they just came off an emotional last-second comeback victory against Jefferson. We just wanted to stress to our kids to dominate every snap and every play, and we’ll be okay.”

After falling behind 26-0 at the half, East Bay gave up two more touchdowns to the Cowboys in the second half. The Indians got some solace on a third quarter TD on a two-yard run from sophomore Armone Bostick. In the fourth quarter, Indians junior Malachi Drayton exhibited some get up and go with a 40-yard scoring jaunt for East Bay with less that two minutes to play. East Bay went for two and converted on a Cameron Peternell toss to Kendall Knowles. The East Bay defense was led by team captain junior Garrett Hines with 6 tackles, 3 sacks, and a blocked extra point attempt. Senior defensive back Joevon Turner contributed 6 tackles, and senior defensive back Logan Webb swiped a Cowboy pass. Junior defensive end Jordan Kow also had two tackles for losses.

Lennard volleyball is serving up success