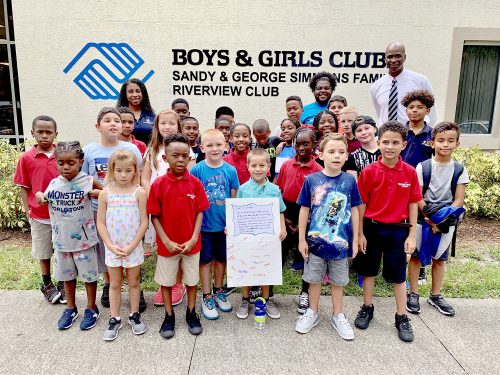 Leaders and children at the Sandy & George Simmons Family Boys & Girls Club in Riverview gather around a thank-you card they signed for Earl Lennard, on whose behalf the Greater Riverview Chamber of Commerce issued a $500 check in support of the club at 6809 Krycul Avenue.

alling her father “a man driven to serve,” Missy Lennard said her family is thankful for the stories shared, prayers offered and support received, including a check issued on his behalf to benefit one of his favorite charities, since Riverview native Earl Lennard fell ill 10 months ago, .

Children at the Sandy & George Simmons Family Boys & Girls Club in Riverview last week signed a letter of thanks for the $500 check the club received from the Greater Riverview Chamber of Commerce on behalf of Lennard, who since Thanksgiving 2018 remains hospitalized, battling complications from pneumonia.

A graduate of Brandon High School and a member of the University of South Florida’s inaugural class, Earl Lennard entered the Hillsborough County school district as a first-grader and left as its superintendent of schools almost 60 years later. He held the positions of deputy superintendent and assistant superintendent, for both administration and for vocational, technical and adult and community education. The governor appointed Lennard to serve out the term of Phyllis Busansky, the elected Hillsborough County Supervisor of Elections who died in June 2009. 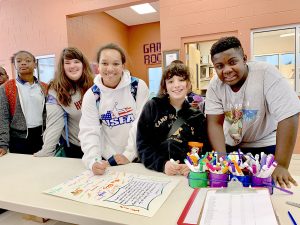 Older students sign their names to a thank-you card to Earl Lennard for his support of children and their club.

“Everything my father’s ever done is about serving someone in some way,” said Missy Lennard, who since 2009 has been charter principal of Dick Stowers Elementary School in FishHawk. “My father has a passion for kids and for the Boys and Girls Club that gives opportunities to kids in our area.”

Missy Lennard and her brother and sister-in-law officially learned of the $500 check at the chamber’s Aug. 7 Teaching To Excellence breakfast at The Regent. Jeremy Lennard is the technology specialist at Bloomingdale High, and Rebecca Lennard is an AP teacher at Riverview High. Tanya Doran, the chamber’s executive director, said Earl Lennard’s vision as a chamber board member helped establish the annual breakfast.

“He wanted schools and teachers in the community to see how they are completely surrounded by support in the community,” Missy Lennard said. This year’s breakfast welcomed teachers new to Riverview’s 25 public and charter schools and gave a nod to each school’s Teacher of the Year honoree. 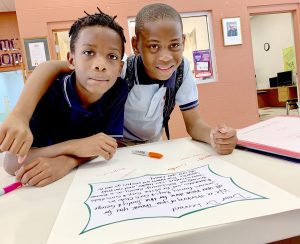 Boys & Girls Club attendees Taydon, left, and Chandler pen their names to a thank-you card to Earl Lennard for his support of children and their club.

Weeks later, at the chamber’s Aug. 27 monthly membership meeting at The Regent, Alison Fraga and Ricky Gallon, of the Boys & Girls Clubs of Tampa Bay, accepted the Riverview check in Lennard’s honor. Fraga is her organization’s chief development officer and Gallon, a former NBA player, its metro office community liaison.

“Earl Lennard, Dick Stowers, Joe Garcia, Ray Campo and the Simmons family, these people brought in people who wanted to give back to the community,” Gallon said, about the Riverview club’s formation. “I really like the way they had the foresight to do something bigger than yourself that will be here long after you’re gone. These are people with big hearts and amazing roots in the community, always there for us.”

“Dr. Lennard would say ‘It’s not about us; it’s not about you or me; it’s about the kids and what we can do to make sure they have everything they need,’” Gallon said. “He said you can’t expect everything to happen overnight. Sometimes it takes time to build things.” 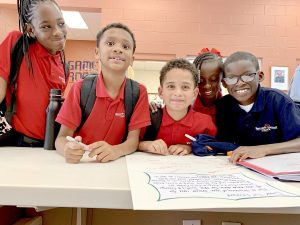 Students from the Winthrop Charter School in Riverview pen their names to a thank-you card to Earl Lennard for his support of children and their club.

Doran issued a similar sentiment. “When I started at the chamber more than 10 years ago, Earl Lennard was very instrumental in developing me as a new executive director,” Doran said. “He is certainly one of my mentors, along with his wife, Annabel. I’m very blessed to know the family, and I continue to strive to do more and better.”

As for Earl Lennard’s health, “He has made great progress and had a significant setback this summer and remains hospitalized but in good spirits,” Missy Lennard said. “My mother has been by my father’s side from the start. They got married 55 years ago, this past June 13, at Riverview United Methodist Church, where he continued to teach Sunday School up until the Sunday before he got sick.”

“As a family, we’ve heard so many wonderful stories about the impact my father has had on someone’s life or in some way he’s helped someone,” she added. “These stories have been so helpful to our family to hear.”

Shateia Bryan, director of the Riverview Boys & Girls Club, at 6809 Krycul Ave., offered one more reflection as she watched children sign the club’s thank you card to Earl Lennard on Sept. 12. Bryan said she met Lennard at an early advisory council meeting, where he told her they had met before, at her 2001 Brandon High graduation. “He told me he shook my hand,” she said. “And I’m like, with all the hands you shook as superintendent, how do you remember it was me, at graduation, at Brandon High? That just showed me how much he cared and how much he impacts people’s lives.”