Networking group with a heart 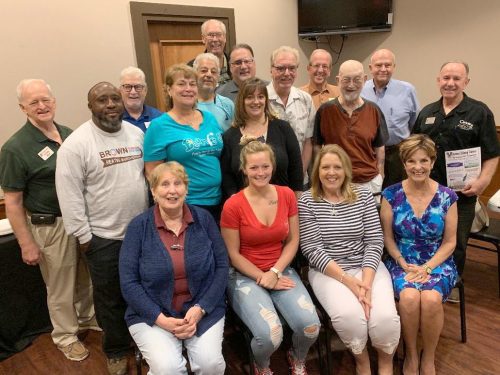 Current members of SSBA gather for a group photo at The Alley at Southshore, where they meet from 7:30 to 8:45 a.m. the first and third Wednesday of every month. LOIS KINDLE PHOTO

SSBA is a networking group with a heart

The group may be small, but the camaraderie is mighty at the bimonthly meeting of the SSBA. Its 20 regular members network together, like any other group of its kind, but they also support a variety of local charities on a regular basis. Every meeting features lots of laughter as well as business.

The SouthShore Business Association was founded in 1998 by Shirley May & Bruce Scheller, Don Guiley, Hugh Moore and a handful of others. By 2006, it had grown to 80 active members, who met weekly at the Cypress Creek Golf Club in Ruskin. “The room was always packed,” said Penny Smith, the group’s current facilitator.

She added that two years later, when the recession hit, many of its members either closed their business or had to go work for other people to survive the economy. “It didn’t help matters when, in 2010, a bunch of BNI (Business Network International) groups began showing up in the area,” she said.

Like the other remaining SSBA members, Smith remains loyal to the group because it provides the most referrals of several other networking groups she has tried.

Real estate agent Joe Eletto, of Century 21 Beggins Enterprises and owner of Pure4u Inc., agrees. “It’s become a family,” he said. “I still use (the services of members in) the group, get referrals from the group, and I give referrals to the group. It’s important to me from a business standpoint and also because these people have become my friends and family.”

At a typical SSBA meeting, each member gets to briefly talk about his or her business, anything new going on or what makes for a good lead. Members have a quick breakfast and, occasionally, listen to a guest speaker. One member gets to give an extended presentation, if desired. There’s also time for thank yous, testimonials and announcements, which include any charities members are fundraising for.

These include Toys for Tots, Faces of Courage, Critter Adoption and Rescue Effort no kill animal shelter, Beanie’s Angel Tree and back-to-school backpacks, and the SouthShore Friends of the Library.

There are also special causes that come up for discussion. Currently, it’s a Bahamas relief effort being undertaken by SSBA member Beanie’s Family Sports Grill.

SSBA, whose motto is Winston Churchill’s “We make a living by what we get, we make a life by what we give,” is now pushing to enlarge its membership. During its Sept. 18 meeting, the group will host an open house at 7:30 a.m. at The Alley at Southshore, 10221 Big Bend Road, Riverview, for anyone who wants to learn more about membership and how it can benefit one’s business. Breakfast is free, and Larry Brooks, of A & A Mortgage Funding, will speak about reverse mortgages. A quarterly directory of members will be passed out.

There are no large, annual fees, no exclusive seats, no mandated classes, no penalty for missing meetings and no requirement to refer only to members. “But (the latter) happens naturally because we trust each other,” Smith said. “We’re not just a business networking group. We also give back to the community where we live and work.”