Cowboys and Indians Friday in Tampa

East Bay veteran Coach Frank LaRosa was in no mood to kiss his sister Saturday night. An old, crusty football coach once declared that “a tie is like kissing your sister.” That old saying rang true for LaRosa in a game delayed one night by reports of an unpredictable hurricane, which stayed on the east coast this time. 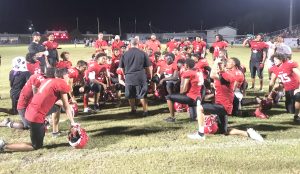 LaRosa ordered his Indians to eschew the tie. “Go for it!” he implored his young, inexperienced, winless team. The gamble paid off as East Bay rammed home the two-point conversion in an amazing 35-34 comeback victory over Jefferson Saturday night in Gibsonton.

Jefferson was the team celebrating, but it was a premature celebration. Jefferson scored with about 4 minutes left in Saturday’s game, thinking they had iced their second victory of the season. But the Indians refused to wilt.

Fighting the clock and Jefferson, LaRosa’s team marched down the field. With only three ticks on the clock and trailing 34-27, Cameron Peternell found the end zone on a short plunge to make it 34-33 in favor of Jefferson. Decisions! Decisions! 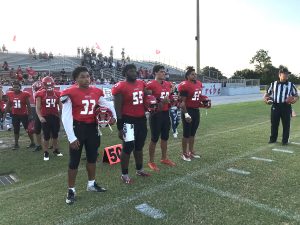 It did not take long for LaRosa to decide to go for 2 and the win. Of course, failure would have meant an immediate heartbreaking defeat, the third of the year. The risk paid off as East Bay sophomore Armone Bostick took a handoff and scored the winning two points behind great blocking, especially from senior Jackson Castillo and junior Jordan Kow. After going scoreless and losing the first two games of the year, the Indians had a scintillating win for the ages to put their record at 1-2.

Disdaining the pass because its ground game was rolling so well, East Bay amassed 529 yards rushing against Jefferson. The Indians only went to the air 3 times and completed 2. The East Bay rushing attack was spearheaded by senior Kameron Washington who totaled 122 yards with his longest being a 64-yard scamper for a TD. Bostick added 90 yards rushing and senior Joevon Turner piled up 67 yards on the ground and tacked on a 28-yard pass reception. 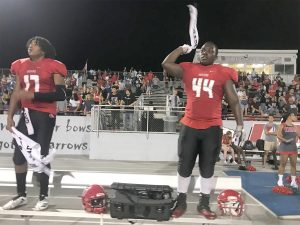 The red and white defense was led by senior Johnny Halaufia-Martinez with 6 jarring tackles. Junior Garrett Hines registered a tackle for a loss and a sack. Dependable, consistent senior Jaden Santos Lopez contributed 5 tackles, 2 for a loss and 1 sack.

However, the joyous 1-2 Indians do not have much time to celebrate as it is out of the frying pan and into the furnace of powerhouse Gaither in Tampa this Friday night. “Gaither is loaded,” opined LaRosa in an understatement. Coach Kirk Karsen’s Cowboys have thrashed Jefferson 36-14, upset Plant 35-28, and taken care of Plant City 28-23 to go 3-0 in the young season.