Call for artists to create for roundabouts

Hillsborough County Commissioners have given the go-ahead for three-dimensional public art in the center of upcoming traffic circles and roundabouts throughout the county, with locations in and near Riverview top on the list to get started. 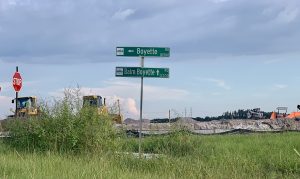 LINDA CHION KENNEY PHOTOS
Street signs announce the intersection of Boyette and Balm Boyette roads, where county officials have issued a call for artists for a bicyclist sculpture in the upcoming roundabout. Behind the signs is the upcoming Hawkstone development.

Commissioners at their Sept. 7 meeting issued a call for artists to submit their designs for a sculpture of Riverview founder Benjamin Moody, for placement at a roundabout on Riverview Drive, near the upcoming Alafia River Park, about 1 mile east of I-75.

Likewise, a call for artwork inside that county-owned passive-use park has been issued for a sculpture representing a person from the Native American community that settled along the mouth of the Alafia River.

Even before these two actions, the commissioners in August approved a call for artwork representative of a bicyclist at the intersection of Balm Boyette and Boyette roads, near the upcoming Hawkstone master-planned community in Lithia. The West Bay development is 1 mile south of the bicycle motocross at Triple Creek BMX and about 6 and 12 miles, respectively, from Balm-Boyette Scrub Nature Preserve in Wimauma and Alafia River State Park in Lithia, both popular destinations for mountain-bike riders.

“This is when I first started thinking about the roundabout art concept, for that awkward triangle where Boyette and Balm Boyette roads come together, not far from Hobson Simmons Road,” said Commissioner Stacy White, who represents District 4 in Hillsborough County. “That network of roads also is very popular with street bicyclists, who ride along the shoulder on the weekend.” 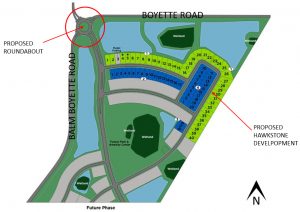 White said his well-received proposal for the Hawkstone-area roundabout informed his decision to push for a policy for public art in the center of all upcoming county-owned traffic circles and roundabouts, which commissioners unanimously approved at their Aug. 7 meeting. Waivers will be allowed for budgetary and engineering constraints.

“Our traffic engineers really like roundabouts, they’re real believers in their functionality,” White said. “We’re seeing a number of them slated to be built over the next two years.”

The bicyclist concept became a pilot, “to give the concept a test run,” he added. “The board really liked it, the developer really liked it, and that’s when I brought the policy forward” for countywide implementation.

With rapid growth and urban encroachment “communities tend to merge into one another,” White said. “I can pinpoint many examples in my district where you leave one community and don’t realize you’re entering into a new community. Public art is just one of many tools we have in our tool chest to create a sense of place.” 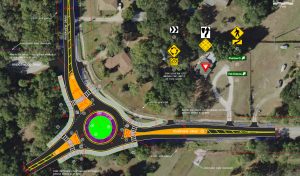 Winthrop town artist Bryant Martinez said he is excited about the policy and “super interested” in seeing the growth of public art throughout the county. “What makes a house a home is when we start decorating it with important pieces of art that mean something to us,” said Martinez, who works for the master-planned Winthrop community in Riverview. “Something historical, a gift from a neighbor, or maybe a unique art piece made by a family member. Art makes us different. Likewise, art lets us enjoy our differences in different areas of the county.”

Recognizing history’s role in community differentiation is what prompted White to propose the Riverview artwork, focused on town founder Moody and the town’s Native American heritage. Letters in support of the two sculptures were sent on behalf of the Greater Riverview Chamber of Commerce and the Tampa Bay History Center. In the case of the Native American sculpture, support also came from the Seminole Tribe of Florida’s Ah-Tah-Thi-Ki Museum. 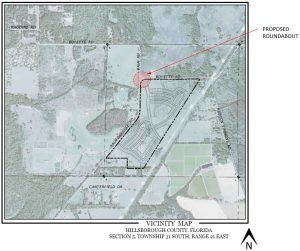 Tanya Doran, the chamber’s executive director, noted that Moody “was a soldier, cattleman, civic leader (who) was chosen as one of the first county commissioners in Hillsborough County.”

Museum director Kate Macuen thanked the commissioners “for the consideration of erecting a statute that honors the tribe’s ancestors and provides an educational experience for the public.” She added that museum officials are set to provide historical information and images from the museum’s archive and library to assist with design considerations. 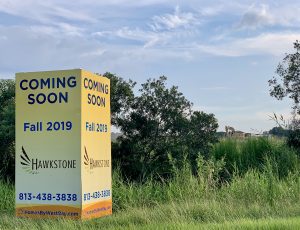 A sign announces the upcoming master-planned Hawkstone development, where a traffic circle roundabout is set to feature a public art sculpture reflective of the area’s mountain biking and bicycling communities.

Likewise, the Tampa History Center is on board to help as needed, heralding the use of sculptural representations to instill a sense of pride in county history. Historic sculptures “help preserve and share Hillsborough County’s history, one that is richer, more diverse, and, yes, older than most any other in the country,” wrote C.J. Roberts and Rodney Kite-Powell, in their letter of support on behalf of the center.

Calls for artwork can be found on the county’s website at hillsboroughcounty.org. The deadline for design proposals is Sept. 23 for the bicyclist sculpture. Design deadlines and particulars for the Riverview statues are still being formalized. For more information, call Amanda Grant at 813-274-1660.