Preserving the history of Palmetto 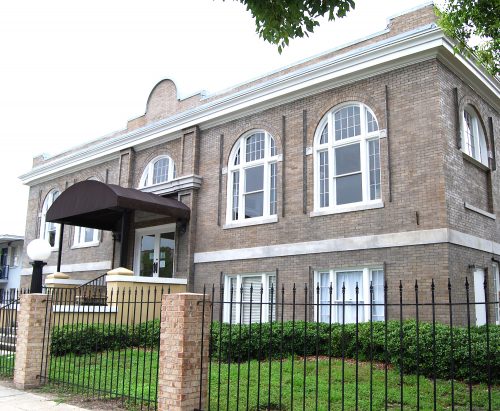 The Palmetto Carnegie Library, built in 1914, has been restored and is the home of the Alice V. Myers Archive Center, which contains papers, photos and artifacts that Palmetto families and businesses have donated.

Third article in a series on the Palmetto Historical Park.

Residents of Palmetto have always had a great appreciation for the history of their town and work hard to preserve and chronicle that record of the past. Civic organizations, churches, schools and other institutions have joined forces over the years to accomplish various historical projects.

Many times the Palmetto Historical Commission has been at the forefront of those efforts. The commission was incorporated Feb. 20, 1982, as a nonprofit group to stop the demolition of Palmetto’s original post office building, which had been built around 1880. 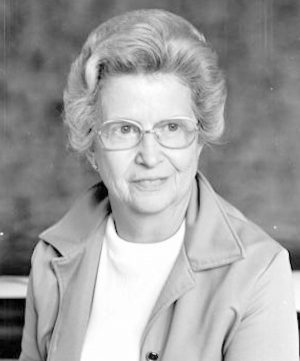 According to the Palmetto Historical Commission history, Josephine Harrison was the moving force in organizing the group. “Jo (Harrison) had this wonderful idea of what to do with the old (building),” said Donna Courtney Simpson, one of the commission’s founding members. “She (was) good at what she (did).”

The city had offered its first freestanding post office to the Palmetto Fire Department for a controlled-burn exercise, but Harrison had other ideas. She rallied the town’s movers and shakers, and the Palmetto Historical Commission was formed to raise the funds to have it moved to city-owned property behind the 1914 Carnegie Library, 515 10th Ave. W., and restored. “Jo always wanted to make (behind the Carnegie Library) a park,” Simpson said. Harrison died in 2000.

The restored post office, renamed Heritage Station, was dedicated on March 25, 1983. Since then, the historical commission has added a one-room schoolhouse, the Cottage Museum, the Cypress House Military Museum, and a replica of a town chapel. The commission also was involved in saving the Carnegie Library from being demolished and in restoring it. 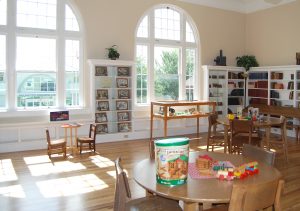 The Palmetto Carnegie Library, 515 10th Ave. W., has an area that provides activities for children to learn about the history of Palmetto.

The library was built in Palmetto because the city council at that time applied for the grant. “They were a very squeaky wheel,” said Palmetto Historical Park curator Tori Chasey. “They asked and asked and asked.”

“They just kept asking,” said Palmetto Historical Park supervisor Amanda Polson. “They wrote the Carnegie Foundation letters, and if they didn’t hear back from them right away, they wrote (the foundation) back saying, ‘Oh, we thought maybe our letter went astray,” and (the foundation) finally said okay.”

“We actually have the letters upstairs (in the Carnegie Library) and they’re pretty funny,” Chasey said during a recent interview in the basement of the building. 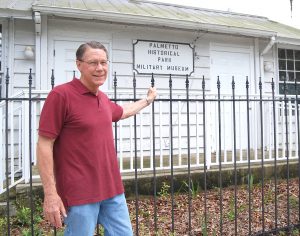 Carnegie required the libraries not only to carry his name but also to have a basement. Polson said the city officials wrote to the foundation, saying buildings in Florida do not usually have basements, but the foundation insisted. “We think (the foundation) wanted a built-in community center,” she said. “They wanted it to have an auditorium with a stage.

“The city tried to talk (Carnegie) out of it, and the Carnegie Foundation wrote back and, basically, said that everybody else they had given their money to figured it out, and if the city wanted their money, it needed to figure it out, too,” Polson said.

Through the years the building served not only as the town library but also, at times, as a school library, meeting place for many civic and church organizations and the Girls’ Club.

After the Manatee County, Bradenton, and Palmetto libraries merged into the Manatee County Public Library System in 1963, the Palmetto Carnegie Library continued operating as a branch library until 1969, when a new library building was constructed across the street. 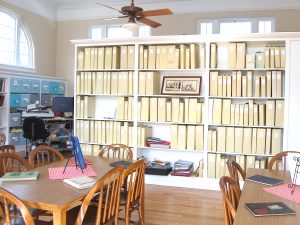 The Alice V. Myers Archive Center in the Palmetto Carnegie Library contains papers, photos and artifacts that Palmetto families and businesses have donated.

The Girls’ Club occupied the building for a time but moved into its own building in the mid-1980s. The building remained empty and began to deteriorate until the early 1990s. That was when Harrison used her persuasive skills to restore the Carnegie Library to its former significance as a city landmark. Palmetto Community Redevelopment Agency Executive Director Jeff Burton, who was on the Palmetto City Council at the time, recalls going to a book sale at the new library. Harrison also was there, and she and Burton started talking about the Carnegie Library and what the city was going to do with it.

“Jo asked who owned it, and I told her the city. We went across the street to see if we could look inside and the door was open. It was in complete disarray,” Burton said.

He recalled that they both thought it would be a shame to let the building deteriorate any more and came up with a plan to save it. “I talked with Albert Wood, the city building official at the time, and asked how much it would cost to tear it down. He said $50,000. We set it up with Jo that I would bring it up at a council meeting that we need to do something about the building, and Albert would tell the council it would cost $50,000 to tear it down,” he continued with the story. 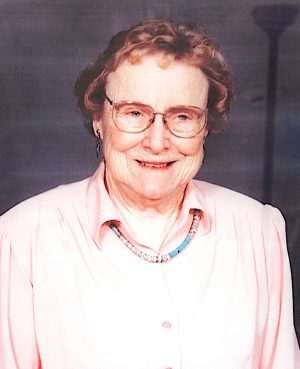 “Jo, who was sitting in the back of the council chambers, got up and said she came to the meeting because she heard the city was going to tear down the Carnegie Library and challenged the council that she would raise $50,000 to match the money the city would have used to demolish the building and, instead, have it restored,” Burton said. “Jo did everything she said she would do. She was a force to be reckoned with.”

Courtney Simpson was instrumental in helping Harrison raise the $50,000. “All you have to do is get a group of women, and it’ll get done,” she said. Simpson, who had been born in Ellenton and moved to Palmetto when she married Don Courtney, said she has been involved in several fundraising campaigns for various community and civic projects. As president of the Palmetto Women’s Club, she was able to have local businesses put a roof on the club’s building, paint it, and install lighting fixtures.

“Dr. (W.D) Sugg wanted a museum and put out the word to a group of women, and we flocked over there,” Simpson, who is 92 and still active in the community, recalled. “More than 200 women showed up.” Manatee County has those women to thank for the Bishop Museum of Science and Nature in Bradenton.

“And that’s how you get things done,” added Simpson, who married Sam Simpson after her first husband had died. “You get a group of women interested, and they’ll do it, and then they expect their husbands to pay for it.” 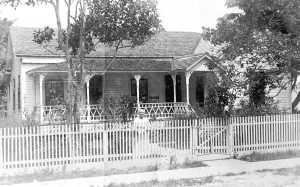 MANATEE COUNTY PUBLIC LIBRARY SYSTEM PHOTO
Mary Nettles, Palmetto’s first postmistress in the 1880s, stands in front of her home in this historical photo. The post office, attached to the house on the far right, was saved from demolition and moved to the Palmetto Historical Park, 515 10th Ave. W., in 1982 and restored as the Heritage Post Office. The Palmetto Historical Commission has plans to reconstruct the house to become the park’s Preservation and Education Center.

After its restoration, the Carnegie Library became the Alice V. Myers Archive Center, named after Alice Myers, who was a founding Palmetto Historical Commission member and local historian. She died in 2007.

The center houses a collection of photographs, slides, school yearbooks, business directories, local family histories, and other papers and artifacts that tells the story of Palmetto and Florida. “Our archives are local stories and information and things and pictures that people have donated,” Polson said. “It’s what somebody decided was worth saving, so somebody had to donate it for us to get it. One of the reasons it’s named after Alice is because she went out (to the people’s homes to pick up those papers and photos).”

Polson explained that the collection includes recorded interviews with local residents. “She interviewed people, and she would do the research.There’s tons of information up there that was done by Alice.”

After it became known to the public that the Archive Center would take family records, others began donating their papers. “So if you’re looking to do research on something, there are some topics that we have loads of information on because a particular family saved it to donate,” Chasey said, “but there are other really important families in the area we know nothing about.”

For Bob Marble, vice chair of the Palmetto Historical Commission, the group’s main purpose is to preserve Palmetto’s history. “I think it’s important that we preserve as much of our heritage as possible,” said Marble, who moved to Palmetto when he was in the fifth grade, “so people can not only see examples of what life was like in the past but also appreciate how much things have improved over the years.” 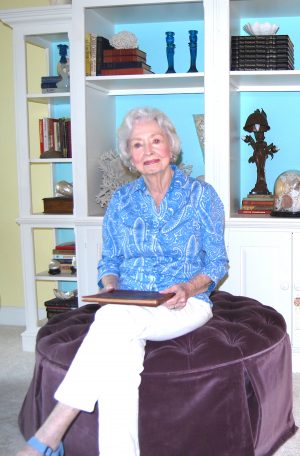 CARL MARIO NUDI PHOTOS
Donna Courtney Simpson, one of the founding members of the Palmetto Historical Commission, has been active in raising funds for civic and community projects for most of her 92 years.

The 72-year-old said he would like to see younger people get involved with the commission’s work. “We need to expand our outlook and widen our scope a bit,” Marble said. “I also would like to partner more with the African-American community and get some of their history at the park.”

The Carnegie Library is open from 10 a.m. – noon and 1 – 4 p.m., Tuesday through Friday and the first and third Saturdays of each month. Access to the historical buildings in the Palmetto Historical Park is limited to guided tours at 2 p.m. every day that the park is open.