The dangers of social media use

HCSO advises residents of the inherent dangers of social media use 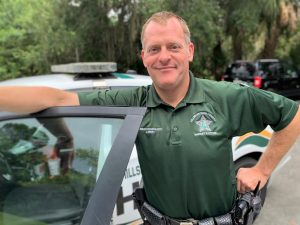 Hillsborough County Sheriff’s community resource deputy Jeff Merry has been “slammed” with complaints lately from folks who have been scammed on social media apps. And others are hoodwinked by inaccurate information.

“Someone locally created panic recently on both Facebook and Next Door, when they posted that census workers currently surveying in the area are scam artists,” Merry said. This wasn’t true.

“People who read these posts got so riled up, it resulted in legitimate census workers being verbally abused,” he added. “This shows the power of social media.”

Merry said those who do this have nefarious intent.

“After establishing a relationship, criminals can financially exploit unsuspecting people or recruit them as money launderers or as re-shippers by asking their victims if they can send merchandise illegally purchased to their homes and then requesting that same merchandise be resent to Nigeria or Jamaica to avoid tracing. Businesses won’t ship to countries like these.”

A guy on Next Door initially messaged a woman in Freedom Plaza about needing someone to clean his lanai. Through continued conversations their contact morphed into the beginnings of an online relationship.

The woman became suspicious, reported this guy to the Hillsborough County Sheriff’s Office and learned he was a fake profiler soliciting women for a relationship, so he could later defraud them out of their financial resources.

He had done this with a dozen other women in the area, Merry said. The same thing happened to a Valencia Lakes’ resident.

Merry said criminals set up fake social media accounts to steal identities, steal money or make them unknowing accomplices in some sort of illegal activity. “Experts estimate around 14% of all Facebook accounts are fake,” Merry said.

He offers the following advice: If you don’t know a person who makes a friend request, decline it. If you get a request from someone who’s already a friend, deny it. If you’re asked for money or requested to re-ship something, report it to the Hillsborough County Sheriff’s Office and the social media site.

Here are a couple of other tips:

Limit the amount of personal information you provide on any social media site, like email addresses, birth dates, phone numbers and where you were born. And avoid making posts that say too much about you. Set your privacy controls as high as possible. Only share posts with people you know.

For more on the subject, Merry is hosting the following informational seminars in Sun City Center: