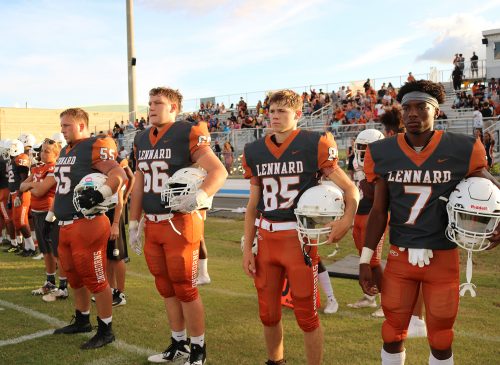 Lennard and Riverview, both unbeaten and future opponents, appear to be the class of South Shore high school football so far. East Bay and Spoto still have some work to do, as both are winless.

The Riverview Sharks added another victory to its 2019 worksheet, nipping Durant 13-12 on the road in Plant City last week. Coach William Mosel’s Sharks remain unbeaten after a first week slugfest over Blake 37-26. The Sharks hope to make it 3-0 against a hapless Brandon squad in Riverview Sept. 6.

Meanwhile, the other Riverview high school, the Spoto Spartans, continue to struggle mightily. Coach Cassius Crawford’s Spartans were overwhelmed by the Newsome Wolves 49-0 for their second straight lopsided loss in the early going. Things do not promise to get much better for Spoto as powerhouse Steinbrenner (2-0) visits the Spartan stadium this Friday night.

The Indians are hoping to find some offensive punch this Friday night as they play their first home game against equally winless Jefferson, losers in their only game, 36-14, to Gaither.

Against Chamberlain Aug. 30, the Indians were never in the game. Both teams sustained shutouts in their season openers, but the Chiefs bounced back under coach Jason Lane in Tampa.

The Chiefs dominated on the ground, in the air and on defense. What else is there in football?

Superb Chiefs’ running back Antony Guzman set the tone early against East Bay. The senior running back hit the edge on the very first offensive play, hitting a seam and sprinting 75 yards for a TD.

East Bay has shown no signs of replacing its offensive firepower from a season ago. The Indians only mustered six first downs, provided Chamberlain with four turnovers, and coughed up a blocked punt for a Chamberlain touchdown.

LaRosa has only three starters returning from last year’s 7-4 squad and no one has stepped up yet to fill the vacuum. Were it not for the Indians’ defense, they would not have scored at all. East Bay’s outstanding linebacker Jaden Sanchez-Lopez corraled a mid-air fumble in the third quarter and muscled his way into the end zone from the three-yard line. After the ensuing kickoff, East Bay registered its second, and final, highlight by trapping Chamberlain in the end zone for a safety.

“Unfortunately, we don’t have depth,” East Bay’s veteran coach LaRosa lamented to the media after the loss. “What we have is a tough group of kids who are going to dig in and fight, especially inside the 20 after turnovers. We just have to find a way to clean up mistakes.”

Hurricane Dorian was nowhere in sight last Friday night, but the Lennard Longhorns flattened Brandon 43-0, leaving the Eagles feeling as if a category 5 storm had rolled over them. The Longhorns’ victory at Brandon means for the first time in his four years as head coach, Longhorns’ Matt Kitchie has won two consecutive games.

Lennard opened with a 14-0 shutout over rival East Bay two weeks ago. Now, in a battle of early-season unbeatens, the 2-0 Wharton Wildcats come calling from Tampa for the 7:30 p.m. kickoff Sept. 6 in Ruskin. Each team will be vying for win number three in a row. Wharton’s own season-opening wins over Brandon 26-6, then Leto 40-0.

Last Friday in Brandon, the Longhorns stormed to an early lead and coasted with a running clock in the second half as Horns junior #8 Quay Smith and senior #21 Tino Hunt each took it to the house twice. Early and often, the Longhorns pounded the Eagles who had no answer for the Horns’ speed, size, power, experience and execution.

Also joining the scoring parade for Lennard was sophomore #11 Jahki Davis who snagged a TD pass from sophomore QB Gavin Henley. In a move that may not be replicated the balance of the season, brawny lineman senior #55 Braden Nash got in on the TD act by rumbling 36 yards for a late score to salt it away for Lennard.

Lennard got greedy early and went for two after the first score as Amari Jones collected an aerial from Dax Corr. Also putting points on the board were PAT kickers Jocelyn Diaz and Matthew Greenaker, both seniors. Senior Jacob Martinez saw action at QB in the second half, completing 4 for 4.