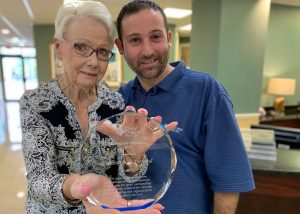 The awards are given annually to those who consistently make a difference in the lives of residents through compassion and deeds. This year’s winner was Sun Towers front desk receptionist, Barbara Crawford.

“We nominated Barbara in May and learned that she would be recognized at the company’s annual banquet this month,” said Sun Towers ALF Administrator Matt Permuth. “She was an easy choice for me.

“Barbara’s elite,” he continued. “She’s a giver, our servant leader. She’s a talented, wonderful person, and our residents love her.”

Crawford, 75, is the face of the Sun Towers’ building. For the past 12 years, the Apollo Beach resident has greeted anyone who enters the lobby, answered phones, handled residents’ complaints or referred them to management, as needed, and performed any task she was asked to do.

“I feel I have a gift for helping others,” she said. “And I enjoy using it for their benefit.”

Crawford was totally surprised to receive the award.

“I was breathless when my name was called. I couldn’t speak for a moment,” she said. “I was so humbled. I didn’t expect it at all.”

Permuth said Crawford epitomizes his philosophy of employees taking responsibility for their actions and responding with compassion in any situation. “There is no one who does it better than Barbara,” he said. “She is calm, collected, compassionate and professional at all times.”

Crawford, a native of New York City, was two when her mother died during the birth of her brother. An aunt briefly tried caring for the children but had to put them up for adoption by sending them to an orphanage in Tampa. The siblings stayed there until both graduated high school.

She worked 42 years for Aetna Insurance Co. and retired in 2006. Even while working, she served others, volunteering for the American Cancer Society and Faces of Courage. She also delivered Meals on Wheels twice a month.

In 2007, Barbara wanted something to do that would help others and supplement her income, so she replied to an advertisement for a front desk receptionist at Sun Towers. She immediately made an impact there by building relationships with both residents and their family members, Permuth said.

Five years ago, Crawford had an accident at home and severely broke her leg. She developed an MRSA infection in the hospital and was out of work for eight months. During that time, she kept in touch with many Sun Towers residents, volunteered to pick up their groceries, shopped for some of them and ran their personal errands.

“Barbara never wavered in her drive to help others, even when she was battling her own very serious medical condition, which eventually led to a full, right hip and knee replacement,” Permuth said. “While recovering, she also lost her husband of 50 years to a long bout with cancer.” Even though she went through six different operations because of the MRSA and lost the love of her life, she kept pushing to get back to work to Sun Towers full time.

Since her return, Crawford has never missed a scheduled shift and continues to help residents with many of their personal needs.

“Since our Pinnacle Survey began in September 2018, she has been mentioned 16 times by our residents and family members for exemplifying tremendous customer service,” Permuth said.