After years of competing with every other county department for adequate funding, Hillsborough County Public Works is seeking to increase its annual stormwater fee to try and make up for lost time on both replacement and maintenance projects. 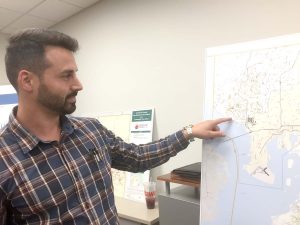 During one recent open house, Public Works engineer Sharbel Riveron goes through the display of multiple maps to explain why his department is seeking the increase in stormwater fees.
Yvette C. Hammett photo

A series of open houses has been taking place across the county to familiarize residents with the need for the fee and how it will be used.

A public hearing is scheduled before the County Commission at 10 am. Sept. 5 in the second-floor boardroom, 601 E. Kennedy Blvd. in downtown Tampa.

According to Sharbel Riveron, a public works engineer, the fee will run most homeowners $92.41 per year, but it is based on the size of the home, including unairconditioned spaces like garages – the impervious surface created by a house’s footprint.

The current assessment for all homeowners is $42.

Impervious surfaces are areas covered by sidewalks, driveways, patios, the house, itself, that do not allow rainwater to naturally percolate into the ground.

The stormwater drainage system is the network of inlets, underground pipes, ditches and so forth that carry that water to streams and waterways to prevent flooding.

During the open houses, the county displayed maps filled with red dots showing pipes that have reached the end of their useful life and must be replaced. Other capital improvement projects also involve replacement of old infrastructure.

“These dots are funded projects,” Riveron said, pointing to one of the maps covered in dots. 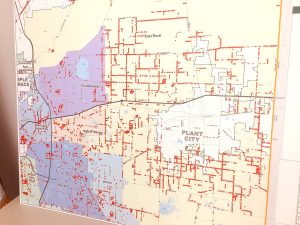 Another colorful map showed all work requests throughout the county. Any time anyone calls in about a flooding concern, Public Works sends someone out to assess the problem and prioritize it. Then, another dot goes on the map.

The worst area of the county for ongoing public works issues is the north area, around Town ‘n Country, Riveron said. There is also a large build-up of old pipes in South Shore and another pocket in Brandon.

The county is bound by law to keep stormwater pollution from entering creeks, streams, rivers and bays, as well as to clean up the waterways within the county’s boundaries.

The fee is necessary, according to Public Works, because it needs to get to a point where it is doing preventive maintenance instead of making emergency repairs.

The new proposed fee is more equitable than the current fee, which is the same for everyone, Public Works contends.

Small properties, like townhomes, mobile homes and condos will be billed a flat rate, while small homes of 100 to 1,500 square feet will pay $50.83. Very large family homes will pay $0.0217 per square foot.