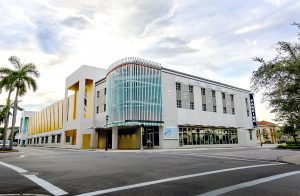 The headquarters for the Manatee Chamber of Commerce, designed by Frawley Bryant Architecture, is located at 222 10th Ave. W. in downtown Bradenton, on the east side of a new parking garage structure the city built.
PROVIDED PHOTO

The new headquarters of the Manatee Chamber of Commerce will be a highlight of the business organization’s 130 year history. An open house will be from 2 to 5 p.m., Friday, Sept. 5, at the new building at 222 10th St. W. in downtown Bradenton, with the ribbon cutting scheduled for 4 p.m. Visitors will be able to tour the 7,500 square feet of office and meeting spaces on the east side of a new parking garage structure the City of Bradenton built. 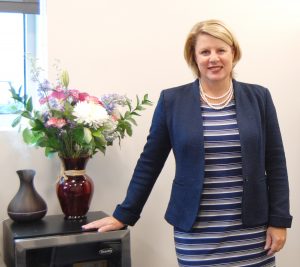 Jacki Dezelski, president and CEO of the Manatee Chamber of Commerce since 2017, has been with the business organization for 23 years.
CARL MARIO NUDI PHOTOS

We feel that the Chamber is the front door to the business community for anyone coming to the community,” said Jacki Dezelski, president and CEO of Manatee Chamber of Commerce. “Our goal was for someone who would walk into the new chamber offices and say, ‘Wow,’ and have this as an indication of the business community in Manatee County.” When entering the front door, one would be impressed by the openness and flood of natural light coming through the floor-to-ceiling wall of windows.

“Fawley Bryant is the architect on the project, and the design ensures that natural light is able to pour from the outside through the windows into the interior of the space,” Dezelski said. “This is the storefront to the business community.”

The use of natural light is also evident in all of the other parts of the building. The boardroom, located off the lobby, has a bank of windows, which again lets the natural light into the room. This large meeting room can seat about 80 people and can be divided for two smaller meetings. It has state-of-the-art audio and visual aid equipment and is comfortable and functional. A smaller conference room also has floor-to-ceiling windows facing 10th Street West. “We’re excited because it’s a storefront meeting place,” Dezelski said. “People walking by can see chamber members meeting and wave.” 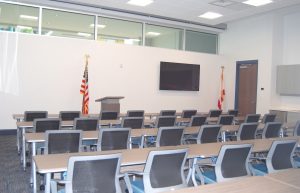 The boardroom in the Manatee Chamber of Commerce new headquarters can seat 80 people and has state-of-the art audio and visual aid technology.

Just beyond the lobby, going toward the office suite, is Legacy Hallway, where past chamber leaders are honored with photos and plaques. The suite of offices in the back of the building is designed to be efficient and have adjustable sit-stand desks.

The Manatee Chamber of Commerce was founded in 1889 as the Bradenton Board of Trades. “Just last month we celebrated the 130th birthday of the founding of what is now the Manatee Chamber of Commerce. I think it is striking in that the mission of the chamber today, which is to build a positive business environment while enhancing our community’s quality of life, is markedly similar to the mission of the Bradenton Board of Trade,” Dezelski said. “They were looking at the economic health and progress of the community, as well as advocating for infrastructure that would help the quality of life of the residents in Manatee County or Bradenton at the time.”

At one time there were separate chambers in Bradenton and Palmetto, but they merged, along with a few other organizations, in 1962 to form the Manatee Chamber. The Manatee Chamber, with around 2,000 members employing more than 68,000 people, is the largest chamber by number of member firms in the Tampa Bay area. “Sometimes this is surprising to folks, but we are larger than the Tampa Chamber or the St. Pete Chamber by the number of businesses that invest in membership,” said Dezelski, who has led the chamber since 2017 and has worked for the business organization since 1996.

“You will find that chambers of commerce and their missions can vary from community to community,” she explained. “The most successful chambers are responsive to their community. We like to say in some ways we run two organizations simultaneously. We run an organization that offers tremendous networking and connection opportunities, which is often what people first think of when they think of a chamber, and we’re absolutely here to help our members make connections with each other and to new customers and clients. And we do that very well,” Dezelski said. “But what we also do very well is the advocacy side of our mission, which is to ensure there is an active business voice when our community is tackling challenges and opportunities. 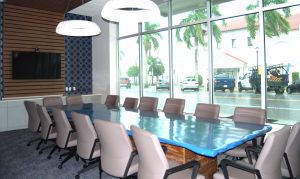 With the floor-to-ceiling windows in the Manatee Chamber of Commerce conference room, people can see members conducting business.

Dezelski pointed out that the Manatee Chamber has more than 20 committees and task forces working on issues that are important to the success of their business members and also to the quality of life in Manatee County. “We have more than 500 members who serve on those committees and task forces,” she said. “That’s a tremendous amount of business expertise coming to bear on issues that are really important to our success.”

One of those active chamber members is Trudy Moon, owner of Air & Energy, an air conditioning, plumbing and electrical service provider. Moon, a past chairman of the Chamber Board of Directors, believes the most important reason for joining any chamber is the camaraderie. “We’ve been a member since 1987, and the majority of my friends have come from the chamber. People do business with friends,” she said. “Also, the services of the chamber — they’re all free and have resources beyond what you can imagine.”

According to Moon, it was time the chamber moved into a new building. “Bradenton is moving forward,” she said.