<strong>The Lennard Longhorns overcame a sluggish first half to outlast East Bay before a packed house, 14-0, last Friday night in the gridiron opener for the neighboring rivals. Lennard goes 1-0 and East Bay 0-1 in the young season. This Friday night, Lennard visits 0-1 Brandon, and the Indians travel to 0-1 Chamberlain. 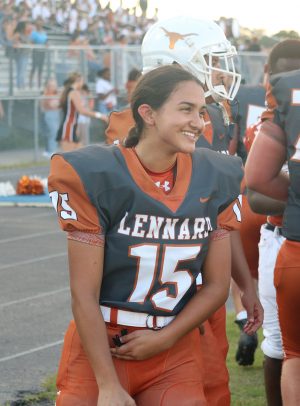 Lennard placekicker Jocelyn Diaz on sidelines after contributing a PAT and a score-saving tackle on one-of-her-two kickoffs.

Highlighting the Aug. 23 “ South Shore Super Bowl” game in Ruskin was the appearance of the second female player in the history of Lennard varsity football. Senior Jocelyn Diaz made her successful and dynamic debut midway through the third quarter. Diaz received the heads-up on the sidelines from the Longhorns’ coach as soon as fullback Davian Papius bulled his way into the end zone for the Longhorns’ first score of the night from the Indians’ 2-yard line.

Diaz trotted out to the field for the PAT with the kicking tee in hand. Lennard’s Braden Nash made a perfect snap to holder Dax Corr. Diaz propelled the pigskin end over end, straight and true through the goalposts for the 7-0 lead, all Lennard would need to claim the victory. Her teammates and the Lennard stands went wild with glee. 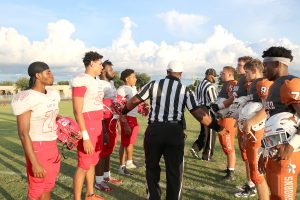 Diaz tracked down and put a convincing hit on East Bay’s Peternell near midfield, keeping the shutout intact for Lennard and, once again, sent the Lennard fans into delirious cheers, as her teammates mobbed her. Diaz said, after the game, she had never made a tackle, not even in practice.

Immediately preceding that game highlight late in the fourth quarter, Lennard put the icing on the cake as sophomore QB Gavin Henley and junior Corr hooked up on a 46-yard pass and run to paydirt play to make it 13-0. Matthew Greenaker, Diaz’ teammate and fellow placekicker, had the honors of booting the extra point to make it 14-0, the final score. 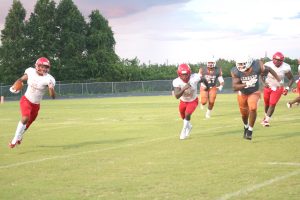 Behind the veteran offensive Longhorn line, Henley completed 5 of 8 passes for 129 yards and the one TD with no interceptions. Senior running back Tino Hunt was a marked man all night but still picked up 69 yards rushing on 17 carries, with 21 yards his longest run. Burly fullback Papius plowed forward for 31 yards on nine carries. Quay Smith, the junior transfer from Palmetto, netted 22 yards on nine totes. Smith also grabbed one pass for 28 yards.

The East Bay Indians had a few flashes offensively and defensively but could not match up with the size, speed, and experience of the Longhorns. Coach LaRosa singled out senior scatback Cam Peternall for his play on offense. The veteran coach also praised the defensive work of sophomore Trevor Freel who led the Indians in tackles and senior Jaden Lopez who registered two tackles for losses.

Fascination with watches turns into charity

What’s in a name? Everything.