Fascination with watches turns into charity

Burt Bennett, 87, has always had an interest in watches. Even as a kid, he’d acquire one, and if something went wrong, he would try to fix it. 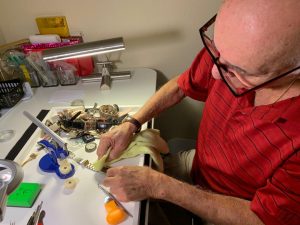 Sun City Center resident Burt Bennett, 87, cleans a restored wristwatch after bringing it back to life. Bennett enjoys the self-taught hobby and is donating 100 or more of his repaired watches to be placed in backpacks for homeless veterans. LOIS KINDLE PHOTOS

“I’ve always had a knack for doing things without knowing why,” said the 87-year-old former insurance company marketer. “Fixing watches is a self-taught hobby.”

Burt’s lifelong fascination with timepieces morphed from collecting wristwatches to wear himself into buying beat-up ones to fix for friends. In 2010, he began collecting and fixing old, non-working watches and giving them new lives.

“I was looking for a charity to donate them to, and all the ones I called wanted to put them in a thrift shop,” he said. “I saw an article in the paper about a backpack giveaway for homeless veterans (and how items were needed to fill them), so I called the number listed.”

“I just couldn’t believe it. He made my day,” she said. “He’ll be giving me enough (men’s and women’s watches) to put one in every backpack. “And he’s offered to give us as many as we need for our event raffle and for future fundraising events. 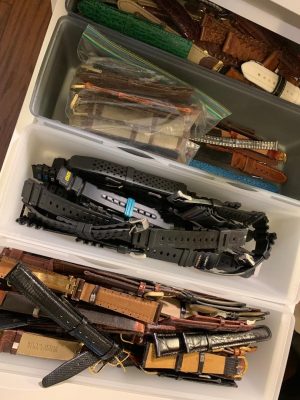 “It’s inspiring to know there are people like him who are willing to share their special gifts,” she said.

Doing so was a no-brainer for Burt. “We’ve always been concerned for homeless people and have always donated to them, regardless of why help was needed,” he said. “There is always a reason someone is homeless, and it’s not our place to judge.”

Having served eight years in the Coast Guard and Coast Guard Reserve during the Korean War era, Burt finds helping veterans who are down on their luck especially satisfying. “Over the years, I’ve probably accumulated about 200 watches and will continue to do so,” he said. “Once I fix them, I want to give them away (to charity).”

Burt buys bunches of old watches in disrepair, cleans and oils them, replaces parts if needed and puts new batteries and bands on them. It’s a satisfying hobby, now that he’s unable to participate in sports like he used to. “It fills my day with something constructive to do,” he said. “It’s very relaxing and therapeutic.”

Originally from Margate, N.J., near Atlantic City, he and his wife, Jean, were snowbirds for more than two decades before fully retiring and moving for good to Pompano Beach in 2004. 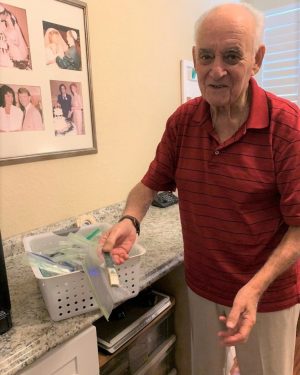 Eighty-seven-year-old Burt Bennett takes a finished watch from a bin holding many he has already repaired in his home workshop in Sun City Center.

They became Sun City Center residents after buying a home in Renaissance last year to be closer to their daughter.

If you’d like to donate old watches for Burt to fix and give to a charitable cause, call 813-922-6723 or email bedwin@comcast.net.

NOTE: Donations for the backpack giveaway to homeless veterans will be accepted in the lobbies of the Sun City Center Area Chamber of Commerce and Freedom Plaza through Sept. 5. If you’d like to volunteer to help stuff the backpacks, call Lesko at 813-927-1147.