Tucked in bayside between the South Yacht Basin and Albert Whitted Airport, the Salvador Dali Museum houses the largest collection of Dali’s works outside Europe. And this treasure is right here in St. Petersburg’s downtown waterfront. A walking approach toward the 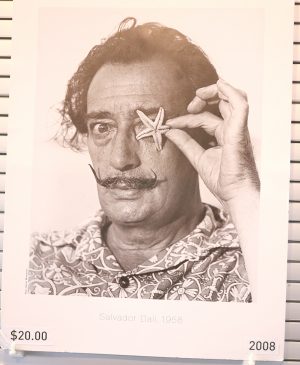 This poster shows the surreal Dali with a starfish.

northwest corner from Mahaffey Theater reveals the big, gray, concrete building: a fitting structural icon for one of the 20th century’s most iconic artists, one who lived by the creed: art is anything you can get away with! And Dali got away with a lot — not only in his flamboyant works on canvas but in his everyday lifestyle and outrageous persona.

The Dali, as the museum is affectionately referred to by Tampa Bay denizens, appears strong and solid (the walls are 18” thick). These thick walls are balanced by “The Enigma,” a geodesic bubble composed of over 1000 glass triangles. The gardens surrounding the building include a labyrinth, sculptures and a heroically stabilized ficus, or weeping fig tree, festooned with flickering ribbons. This is the Wish Tree, toppled and re-righted yet again, most recently after Irma. The Dali Museum is known as an “artist’s museum.” Holistic and immersive, an artist’s museum is grounded in the art, archives, and biographical complexity of a single, creative individual. 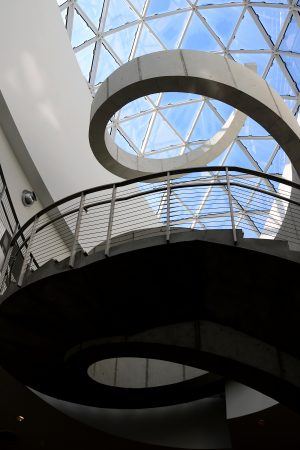 The building’s interior, as seen in this spiral staircase and view of the sky above, as well as the exterior is a work of art in itself at the Dali Museum.

The Dali Museum allows for self-paced tours with or without headphones. Alternatively, with over 100 docents who have completed the 21-week training, a knowledgeable guide is optionally available. Our docent was Anna. Combining the roles of storyteller and teacher, she illuminated both the art and the artist without becoming pedantic and embraced an understated flair for the dramatic as she revealed discoveries, both small and large, some eliciting gasps from those present! (Surely pleasing to the eternal spirit of Dali!)

What about the art? The Morse collection covers the whole scope of Dali’s career: early paintings by a teen-aged Dali, many small and intricate lesser-known works and, of course, the “masterworks,” a term coined by Dalí Museum founder, A. Reynolds Morse, to describe ‘the big ones.’ Perhaps you remember them from coffee-table books and dorm room posters. Staggering in ambition and scope and displaying Dali’s spiritual, religious nature, each took at least one year to create, hardly enough time, it seems, to produce the co-mingling images and fantastic details, the layer upon layer upon layer of meaning. 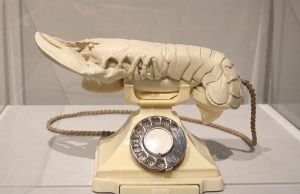 Always the prankster, Dali’s surreal repertoire include sculpture as indicated by this lobster telephone.

On leaving the gallery, a large spiral staircase offers a view from inside The Enigma while winding down to a café. The exit is, of course, through the large, well-supplied gift/souvenir shop. The “Rainy Rolls 2010” is a locally engineered homage to the original 1938 “Rainy Taxi” and gives a fittingly surreal goodbye to The Dali Museum. During our visit, but since moved on, was an exhibit dedicated to Rene Magritte, a contemporary of Dali’s who shared his flair and creativity for surrealism. This fall, and on display until Nov. 1, the Dali museum features prints and paintings by Goya, whose satirical style heavily influenced Dali, The Dali Museum, 1 Dali Blvd., St. Petersburg, FL 33701, is open 7 days a week.