Sun City Center attorney Robert H. “Bob” Mohr is the new chairman of the Community Foundation of Tampa Bay board. 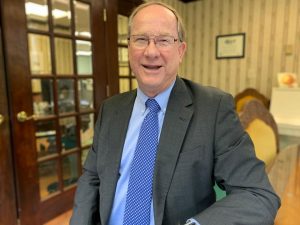 It’s a fitting role for the 70-year-old Apollo Beach resident, who has been associated with the foundation for almost 30 years.
“When the Community Foundation of Tampa Bay was founded in 1990, Bob was one the first people to recognize how significant its work could be for the Sun City Center area,” said Marlene Spalten, its president and CEO. “He also understood immediately that the foundation could be a meaningful way for the generous people of the area to create lasting legacies.
“For all these years, he has always shared with us the same wise and caring counsel we know he shares with his clients,” she continued. “We are proud and grateful for his willingness to lead the foundation.”
After Mohr moved from Milwaukee to Apollo Beach in 1987, he immediately began talking with the Tampa Chamber of Commerce about starting a foundation here. He worked with initial supporters and helped George Baxter, the Community Foundation of Tampa Bay’s first president, publicize the foundation and acquire donors in Sun City Center and the South Shore area.
Almost three decades later, he now leads a 22-member board in managing the foundation’s philanthropic giving, which is based primarily on the wishes of the donors who seeded its various funds (unless unrestricted).
It’s an exciting time for him and the foundation. In its almost 30-year history, donors have made possible $230 million in grants and currently have $275 million invested for future giving.
“We’re moving past the early stages of getting the word out and gathering funds,” Mohr said. “We’re expanding and starting to hit our stride with donors and name recognition. We’re definitely a part of the conversation any time a charitable element is involved.”
Mohr said he has always had a desire to be involved in charitable endeavors, especially in his work as an attorney, where he has assisted clients in establishing funds with community foundations in Tampa Bay, Palm Beach, Milwaukee, Madison, Wisc., and other locations.
He graduated from the University of Wisconsin Law School in 1975, received an advanced degree from the University of Miami in estate planning in 1990 and is Florida board certified in wills, trusts and estates.
“Giving money away to people isn’t as easy as you think,” he said. “The trick is making a genuine difference and helping over the long run.”
Mohr is widowed, has four adult sons, including a set of twins, and three grandchildren.
Mohr’s office is at 37 Pebble Beach Blvd. S., Sun City Center. He can be reached at 813-634-5500 or attymohr@tampabay.rr.com.
The Community Foundation of Tampa Bay is a 501(c)3 nonprofit organization that serves Hillsborough, Pinellas, Pasco, Hernando and Citrus counties. Through gifts, endowments and trusts, it holds funds and supervises disbursement of grant funding to other charitable organizations for programs that make a significant and lasting impact on the region.

Get help through the Master Gardener program