The Walmart Supercenter store in Gibsonton continues to receive unwanted attention. First, it was a fake threat to “shoot up” the place on Aug. 4. Wayne Lee Padgett of Valrico was arrested later that night for that unwarranted active shooter scare. 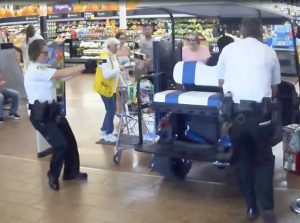 The latest incident involved a 56-year-old, disabled and unemployed Riverview man, involved in a mid-day incoherent drive in a golf cart through the Walmart’s front doors last week on Thursday, Aug. 8.
Michael Dale Hudson, the driver of the up-scale golf cart, faced the judge on Aug. 11. The judge refused to grant his request to reduce his $5,500 bail to $500. Hudson was also formally charged with five separate counts, including aggravated assault and battery with a deadly weapon/vehicle, resisting arrrest without violence, criminal mischief of $1,000 or more and trespassing. The judge ordered Hudson not to be near the vicinity of the Walmart in Gibsonton and not to possess any firearms or weapons.
The Hudson drama started just after noon on Thursday, Aug. 8, when someone called the Hillsborough County Sheriff’s Office, complaining about a disorderly person in a golf cart blocking the entrance to a liquor store at the Walmart in Gibsonton. The golf cart driver refused to move the cart and demanded to talk with the manager.
Deputies arrived about 12:30 p.m. and began talking with Hudson, who suddenly sped off in his golf cart, driving through the main doors of Walmart into a crowded throng of shoppers. Deputies gave chase as Hudson allegedly nicked several shoppers and barely missed several others. Hudson ignored deputies’ orders to stop before he bumped the front doors and crashed into a cash register. Brandishing a stun gun, deputies finally arrested Hudson.

Hudson was taken to Tampa General Hospital and then to the Hillsborough County Jail. Several shoppers were treated for minor injuries, but none were transported to the hospital.
A few shoppers expressed dismay about the incident, saying, “It’s something you would not expect,” and that he (Hudson) put his own life in danger, as well as the lives of the people around him. “He could have hit my three-year old,” one shopper commented in a news media interview after the melee, adding that Hudson was gasping for air after banging into the cash register and, finally, being stopped.