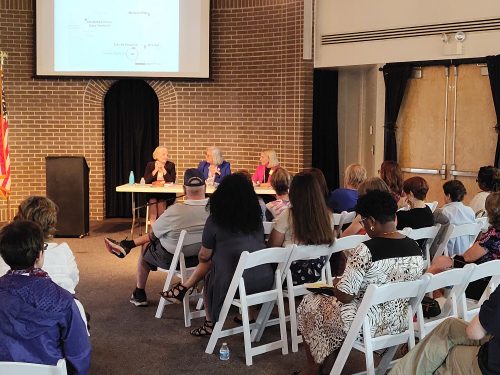 Three county commissioners at forum on proposed Tampa Bay high-speed ferry in Brandon last week are, from left, Pat Kemp, Kimberly Overman and Mariella Smth. The three Democrats now favor the Mosaic Big Bend site as the eastern terminal and extending again the public-private agreement to develop the ferry service. The BOCC is expected to vote on this issue Aug. 7.

By STEPHEN FLANAGAN JACKSON
A surprise, last-minute offer for a terminal site on the east side of Tampa Bay is the latest proposal in the long-running saga of whether or not high-speed ferry service will ever become reality. Once again the plight of the unique public-private funded ferry linking the SouthShore to MacDill AFB and other Tampa area sites depends on a vote by the Hillsborough County Board of County Commissioners at a meeting Wednesday afternoon, Aug. 7, after Observer-News presstime. 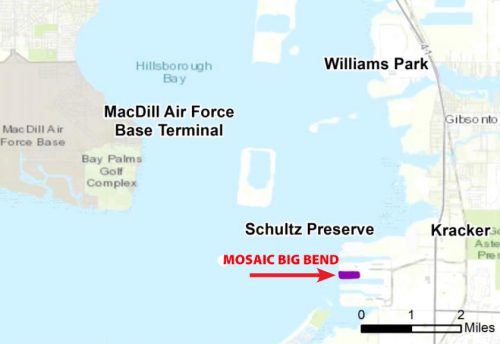 At a mid-May meeting the BOCC voted 4-3 to locate the proposed $36 million project at Williams Park on the Alafia River north of Gibsonton. Now, the latest option for the eastern terminus is about five miles south, at the Big Bend Marine Terminal site, where owner Mosaic has offered a portion of its land near its Port Redwing location, at little or no cost, for the possible development of the ferry terminal, parking, and an access road as a preferred alternate to Williams Park. Mosaic, the fertilizer producer and phosphate mining giant, made the offer just hours prior to a public forum on Aug. 1, which originally listed the Williams Park site as the desired location for the launch and parking on the east side of Tampa Bay. The offer of a portion of its Big Bend site by The Mosaic Company was met with enthusiasm at the Brandon forum, sponsored by the County Democratic Environmental Caucus last week, and viewed as a shot in the arm for the long-awaited launch site for the SouthShore.

The BOCC Aug. 7 vote will determine two items: acceptance or rejection of this latest site and whether or not the Tampa Bay passenger ferry interim public-private partnership agreement among Hillsborough County, HMS Ferries and SouthSwell Development Group will be extended, for the eleventh time, from Aug. 15, 2019 to Sept. 30, 2019.
Democrats on the county commission, Mariela Smith, Pat Kemp, and Kimberly Overman, attended the public forum and strongly support the ferry project, referring to it as a “congestion-proof premium transit system for citizens from South Tampa to South County.” Republican Stacy White cast the deciding vote for the ferry’s Williams Park site at the mid-May BOCC meeting but says he is “undecided” as to how he will vote Aug. 7. The Democratic chair of the BOCC, Les Miller, continues to be against the project, citing possible problems with security clearance at the MacDill terminus and the extensive costs associated with a ferry service project “that does not benefit the entire county.” Miller, along with Republican commissioners Sandy Murman, and Ken Hagan, cast a losing vote in mid-May against the project and the Williams Park site.
The round trip Tampa Bay year-round ferry service proposal calls for county and federal agencies to fund an estimated $36 million in initial capital costs for ferry terminals, docks, vessels, and trams, all of which would be publicly owned and leased to the private operators. The private part of this symbiotic relationship, HMS Ferries and its development partner, the Palmetto-based South Swell Development Group, has offered since 2014 to design, build, maintain, and operate the projected ferry system over a 20-year period at an estimated cost of $104 million with no subsidies from local taxpayers.
Speaking after the Brandon public forum, which was hosted by the three Democratic commissioners favoring the ferry, Russell Conn, chair of the County Democratic Environmental Caucus, said he is delighted with the Mosaic Big Bend site. “This option appears like the best site to account for all the concerns raised [in] the community,” said Conn. He continued, “Developing alternate ways to travel in this region will reduce pollution and traffic for South County residents. We can’t afford not to develop this ferry program if we are serious about planning for the future growth in South County. Even if you are not planning on taking the ferry yourself anytime soon, you will benefit from [fewer]vehicles on the roads and shorter commute times.” 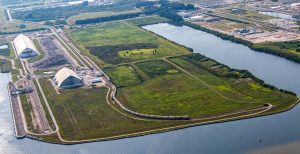 An aerial view of the Mosaic Big Bend property donated by the company to use if the proposed ferry and site are approved.

Having a word of caution on the proposed ferry, which could come to fruition by 2022, was Buddy Harwell, a Gibsonton businessman and marine technician. Harwell advised that input needs to be sought from the Coast Guard, the Port of Tampa Bay, the Tampa Bay Pilots Association and TECO before forging ahead on the proposed site and development plans. Harwell also pointed out that the proposed ferry terminal near Apollo Beach will mean more vehicle traffic on both U.S. 41 and Big Bend Road, already crowded thoroughfares.

The proposed ferry has been high on the list of recommendations of the area Metropolitan Planning Organization for some 20 years. A positive vote by the BOCC on Aug. 7 could be the impetus for a possible 2022 start of service. A negative BOCC vote would put the ferry project in jeopardy.