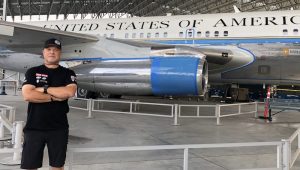 Bo Mortensen, owner of Pure Detailers, said he was proud to be one of the 55 team members who went to the Museum of Flight in Seattle to help restore the metal membrane of the original Air Force One presidential jet.
PROVIDED PHOTO

Manatee County entrepreneur Bo Mortensen recently was honored to serve on a special team that has helped preserve the historic first Air Force One jet.
For the last 16 years, a team of automotive detailers has traveled to the Museum of Flight in Seattle to maintain and protect the metal membrane of the original presidential jet and more than a dozen additional historic aircraft currently on exhibit in the museum’s new Airpark Pavilion.
Mortensen, owner of Pure Detailers, a mobile automotive detailing service, said he was proud to be on the team with 54 other detailers from around the nation.
“Standing on a lift touching that historic plane — it’s hard not be very patriotic when you stand there,” he said. “And it’s fun. The museum is open during the restoration, and a lot of kids will have questions,” Mortensen said.
This Air Force One was the first presidential jet; it served as a flying oval office for four American presidents, including Dwight “Ike” Eisenhower, John Kennedy, Lyndon Johnson and Richard Nixon.
From the project’s inception, California businessman Renny Doyle has organized the restoration of the metal membrane covering the plane. “I got involved with the Air Force One project through Joe Clark, who invented the winglet used on planes.” said Doyle, who, with his wife, owns Detailing Success. “Joe’s been a client for years.” 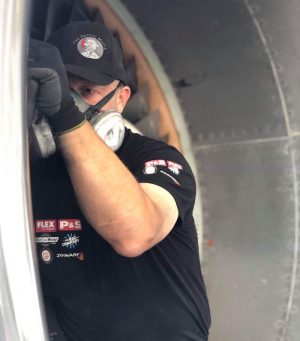 Bo Mortensen, owner of Pure Detailers, spent a week at the Museum of Flight in Seattle as one of the 55 team members who helped in the restoration of the original Air Force One presidential jet.
PROVIDED PHOTO

Clark knew people in the former President George W. Bush administration, and when they decided to do the restoration project in 2002, Clark suggested Doyle to clean and restore the deteriorating paint and aluminum finish on the historic jet.
Since then, Doyle has assembled a team of elite detailers, who call themselves The Detail Mafia, to work on the plane. “It’s been a great experience,” he said. “I got to meet and have lunch with President Bush.”
Doyle has been in business for about 30 years, starting to detail cars when he was a teen. Over the years he has gained a reputation of being one of the best in the nation and was continuously asked to do training workshops.
About 10 years ago he focused his business on the training, mentoring and coaching of novice and professional detailers, offering five-day workshops, intensive one-day training and webinars.
When Mortensen decided to start his business Pure Detailers, he went to California for a week to take one of Doyle’s workshops. “If you’re going to provide a top, professional level of service, you need the skills,” Mortensen said about his decision to go to the workshops. “And you need to associate with the best, and it will rub off on you.”
This is the attitude Doyle saw in Mortensen to pick him for this year’s Air Force One team, which went to Seattle from July 7 through 14.
“Bo was a good team member and could appreciate the project. He has the right heart, the right mind and right skills for the project. And Bo’s pleasant to be around,” Doyle said. 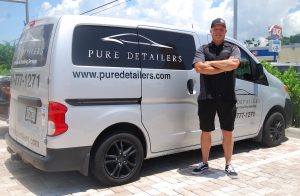 Mortensen started Pure Detailers in 2017 after moving to Florida with is wife, Charlotte, from New York City. When they got settled, they began looking at different businesses to buy but decided to start their own. “I always liked cars, and I went to the Mobile Tech Expo in Orlando (a trade show for automotive detailers) to see what the detailing industry had to offer,” Mortensen said.
While there, he kept seeing the same group of people walking around the exhibition area. “They carried themselves differently,” Mortensen explained. “It said they were confident.” He learned the group was affiliated with Doyle, the owner of Detailing Success and the organizer of the Air Force One restoration project.
“I thought, if I’m going into business, I’m going to be like them,” Mortensen said. Detailing came easy to him. “I fell in love with detailing and decided I wanted to do it. I found I had a knack for it.”
Mortensen, who is a member of the Manatee Chamber of Commerce, serving on several committees of the business organization, and The Better Business Council, decided to name his business Pure Detailers because he “wanted something short and easy to spell.”
“It’s a luxury mobile detailing service. I provide paint correction and ceramic coating, which offers the long-term protection of glass. We’re not just someone with a hose in our trunk,” he said.
Mortensen also does interior detailing. “The interior of an automobile can be dirtier than a public bathroom,” he said. “We use a steam-cleaning system that doesn’t use chemicals and kills germs and bacteria. Mothers like that for their children,” Mortensen said. “We’re a boutique-style detailer catering to your particular needs. We listen to the client — we’re not just a car wash service.” And after his experience working on the Air Force One restoration project, he said he hopes to expand into aircraft detailing.
Mortensen said he always liked cars, even as a child growing up in Denmark. He decided to move to the United States in 1992, when he was in his mid-20s, because of a vacation trip when he was younger. 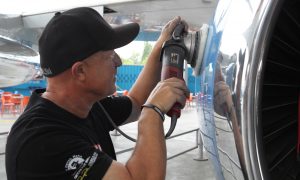 Bo Mortensen, owner of Pure Detailers, was one of 55 team members who went to the Museum of Flight in Seattle to help restore the metal membrane of the original Air Force One presidential jet.
PROVIDED PHOTO

“My parents brought my sister and me to the U.S. for vacation when we were kids, around 12 to 13 years old,” Mortensen said. “I knew then I was going to move here. When I got home, I started learning English and reading all about America,” he said.
What impressed the young Mortensen the most about the United States were the wide, open spaces of the West. “I kept going back to the open sky — the vastness of everything,” he said about his memory of the trip when he got back home. “It intrigued me, fascinated me. I just knew I’d do it (move to the United States),” Mortensen said.
His immigration to the United States was made easy because of a friend. “I was fortunate to find a sponsor who helped me with a green card and, eventually, I got my citizenship in the early 2000s,” Mortensen said.
He worked as a meat consultant at first because he had been in the meat industry in Denmark, as was his father. “We say in Denmark there are five million people and 20 million hogs, and we’re surrounded by the sea,” Mortensen said. “So you either work in the seafood or meat business, and I get seasick, so I was in the meat business.”
After he became established in the industry in the United States, he worked for a medium-size, family-owned business as a plant manager.
Eventually, Mortensen  became the president of a deli meet company, called Hansel ‘n Gretel Brand, Inc., in New York City. When it closed, Mortensen and his wife decided to move to Florida in 2016 and get into a totally different business.
They landed in Manatee County because on their way down from New York, they heard about Siesta Key Beach being the best beach in the world. “That sounded perfect,” Mortensen said.
He said he loves the weather in Florida, and living on a half-acre of property on Rye Wilderness Road is great “after 12 years in New York City where you’re standing on top of each other. Here you can spread your wings and breathe a little,” added Mortensen.
For more information on Pure Detailers, call Mortensen at 941-777-1271 or visit his website at www.PureDetailers.com.
To learn more about the Air Force One restoration project, visit Doyle’s website at www.DetailingSuccess.com.