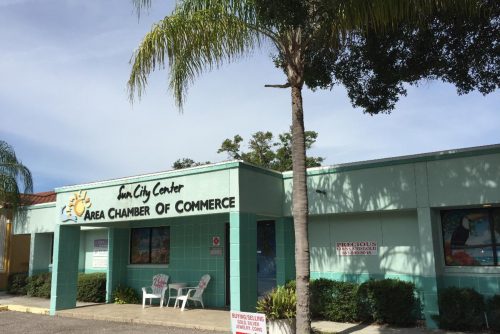 The board of the Sun City Center Area Chamber of Commerce is looking into the sale of its current home at 1651 Sun City Center Plaza. It’s part of a strategic plan aimed at securing the chamber’s future financial stability.
LOIS KINDLE PHOTO

By LOIS KINDLE
The first responsibility of any board is to lay out a strategic plan for its organization’s financial well-being. And the board of the Sun City Center Area Chamber of Commerce is no exception.
Toward that end, its members have identified several major goals, and one of them is exploring the sale of the chamber’s current home at 1651 Sun City Center Plaza.
“The facts are the board is looking out for the financial future of the chamber,” said Jeanne Burkeson, its chairwoman. “Chambers, like any other small businesses, are always looking to reduce expenses. This is a step we’re taking to secure our financial stability.”
Nick Lanese, chamber board treasurer, echoed that sentiment.
“Our mission is to serve our members, and our staff does an amazing job of that,” he said. “But  the downside of owning the building is it drains resources in both time and money.”
Selling the building doesn’t necessarily mean the chamber would move. And just because it goes on the market doesn’t mean the building will sell.
“A buyer might simply want to make an investment, and we might be able to rent space in the current chamber building,” Burkeson said. “Nothing would change except our operational expenses.
“In the event someone wanted to make a purchase for other uses, we would find another space to lease that’s accessible to both our members and the public.”
According to a local commercial real estate professional, this might be an opportune time for the chamber to put the building on the market. Inventory in Sun City Center is very limited right now, and there’s really no place to build except up. This makes for a highly desirable listing.
The 5,800-square-foot building, which looks deceptively small from the street, includes four offices, in addition to the chamber office, and a 3,800-square-foot events hall. It sits in a prime location, and its tenants and renters would  immediately generate income for a buyer.
“We’re letting everyone know about this fact-finding mission for total transparency reasons,” said Lynne Conlan, the chamber’s executive director. “There are pros and cons to owning a building. By being landlords, Kristy (Mahoney) and I are spending so much time focusing on overhead and expenses. We would rather spend our time  focusing on taking care of members more efficiently. Right now, we’re pulled in many different directions.”
The chamber building is owned outright and was first sold Aug. 1, 1983, for $80,000. As of July, per Hillsborough County Property Appraiser records, its assessed value was more than $550,000 and its market value over $660,000.
This is not the first time this chamber’s board of directors has considered a sale. According to old chamber records, there was some thought given to it in the late ’90s. And it’s not unusual for a chamber to change locations. The SouthShore, Greater Riverview and Brandon chambers all have moved several times over the years, Conlan said.
“We have served this community for decades, and we’re convinced we’ll be here for many more,” Conlan said. “Our location, should it change, won’t change our level of service to area residents and our members.”