Thanks to the thoughtfulness and generosity of a group of mountain bike riders, a professional rescue gurney has been added to the repertoire of the Hillsborough Fire and Rescue station in Wimauma. 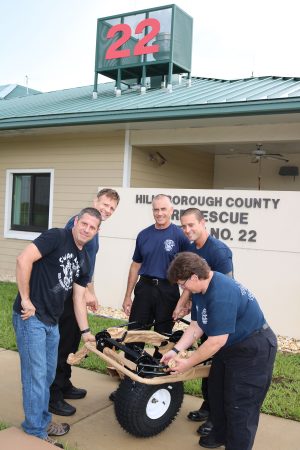 Last week’s donation of a Traverse Rescue Mule II Litter Carrier, with handles, resulted from an emergency incident on one of the most difficult bicycle trails the Balm-Boyette Preserve has to offer.

According to Mike Lamarca, vice president of the Swamp Mountain Bike Club, back in February, a woman, who was enjoying a bike ride on the trail, crashed. The serious accident necessitated a call to Hillsborough County Fire & Rescue to extricate her and transport her to the hospital. Lamarca says she was in an isolated area, probably the farthest area out from the parking lot, about four miles, in the hardest part of that trail.

When HCFR showed up and were told they might have to carry her a quarter mile on the undulating terrain of the trail, they had to contact backup aid from Station 9 at Falkenburg Road and Broadway and ask them to bring the rescue emergency stretcher carrier they had. When the seriously injured woman was finally brought out to the parking lot, a helicopter was waiting in the sod farm to take her to Tampa General Hospital.

After Lamarca talked to a few of the HCFR personnel, it seemed like the county could really use another one of these rescue gurney devices at Station 22 in Wimauma, the closest HCFR station to the Balm-Boyette Scrub Preserve. 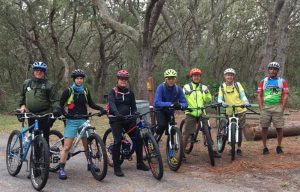 The Swamp Mountain Bike Club maintains and frequents trails throughout several counties. The club donated a gurney that can be used to help rescue an injured rider in rough terrain to Wimauma Station 22. photo from swamp mountain bike club facebook

Within a week, the board of directors of Swamp Mountain Bike Club (SMBC) approved the $1,600 purchase to donate the gurney to HCFR, and the ball was rolling. It was ordered in March, with what was originally going to be a six-week lead time that turned into a 10-week time frame. The SMBC heard from the husband of the woman who had been injured. She had suffered a concussion, did not remember either the incident or the helicopter ride to TGH, but was recovering well and appreciated all the help from everyone who had been involved in getting her to safety.

Swamp Mountain Bike Club, which has approximately 700 active paid members, has been in existence, in one form or another, for over 25 years. Two years ago, SMBC reorganized as a 501(c)3 public charity to move the club forward and to be able to help the community when needed. Its mission statement is as follows: “Through mountain biking we educate, inspire adventure, build and maintain sustainable trails, and strengthen community through cycling.” Swamp Mountain Bike Club maintains roughly 150 miles of single track natural surface mountain bike trails throughout the Tampa Bay area, including at Withlacoochee State Forest Croom Tract in Hernando County, Jay B. Starkey Wilderness Park in Pasco County, Flatwoods/Morris Bridge/Trout Creek in New Tampa/Hillsborough County and Balm-Boyette Scrub Preserve, also in Hillsborough. With that mix of properties, the club also deals with four different land managers ­— state forestry, Pasco County Parks, Hillsborough County Conservation, and Hillsborough County Environmental, all with different rules and visions. 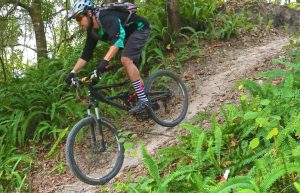 The officers of the SMBC are Shane Richeson, president; Pat Sanchez, executive director; and Mike Lamarca, vice president. The board also consists of a “trail boss” for each trail system (Scott Roff for Balm-Boyette); a secretary (Kay Ruel); legal council committee (Scott Orsini), who is an avid cyclist himself.

Richeson, a chef, loves great food, enjoys playing in the dirt, and relishes a challenge. It is Richeson’s goal to help create through advocacy a mountain biking destination in the Tampa Bay area.

Sanchez is somewhat professionally retired but keeps adequately busy with the fun side of Swamp Mountain Bike Club. She will never miss an opportunity to plug the club’s premier event and fundraiser, the Alafia Fat Tire Festival in November, which she is currently coordinating. More information about the festival can be found at AlafiaFatTire.com.

Lamarca, after years of traveling across the U.S. and the western hemisphere, working primarily in energy, was told by his wife that he needed to stop traveling and work close to home. Responding in a positive manner, Lamarca now works at Kennco Manufacturing in Ruskin, a company that produces farm implements. 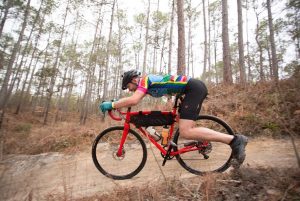 Another mountain-bike option in east Hillsborough is the Alafia River State Park Trail near S.R. 39 in the Lithia area. This is one of the most favored off-road biking choices in Florida. Skilled riders from all over the state ride this collection of scary drops, off-camber hillside ledges, high speed banked turns and challenging ridge top trails. Twenty miles of single-track trails are built on what was once a phosphate mining site.

Both the Alafia and the Balm-Boyette trails will be featured in the upcoming Alafia Fat Tire Festival, scheduled Nov. 8, 9 and 10 for beginners and advanced riders. This event will also feature camping, night rides, food and other attractions, as well as some of the best trails in the country. For more information, go to swampmtbclub.com.

Service with a walk and a talk