Ferry dreams are closer to reality

Will a ferry service connecting the SouthShore across Tampa Bay, and vice versa, ever become a reality?

So far the answer has been no. But a “public-private” initiative proposal to the Hillsborough County Board of County Commissioners at a recent meeting has, once again, provided hope for the long-awaited, much-ballyhooed and much-needed waterway service, which could remove thousands of commuting vehicles daily from South Shore to Tampa, and back, highways.

Redundantly, the key words are “proposed,” “potential” and “possibility” when referring to the Tampa Bay high speed ferry project, which has been mired in discussions and environmental impact and feasibility studies since 2012 or before.

A town-hall-type meeting, which is open to the public, is once again planned and scheduled for Thursday, Aug. 1, from 6:30 to 8:30 p.m. at Center Place Fine Arts, 619 Vonderburg Drive, Suite B, Brandon. It will be hosted by BOCC members Pat Kemp and Mariella Smith and the South Swell Development Group.

The latest proposal for a South County or South Shore ferry terminal on the east side of Tampa Bay cites Williams Park on the Alafia River on U.S. 41 north of Gibsonton as the terminal’s location. If the BOCC can ever settle on a site and a plan and approve this proposed unique partnership with HMS Ferries and South Swell Development, this would be the first local public transit system in Florida that would not require a local or state operating subsidy.

The Hillsborough BOCC voted 4-3 in favor of this plan at its May 15 meeting. The next phase of the project and development is on the BOCC agenda for Aug. 7. The four BOCC members voting for the ferry project were Stacy White, Pat Kemp, Mariella Smith and Kim Overman. Voting against the project were Sandra Murman, Ken Hagan and Les Miller. 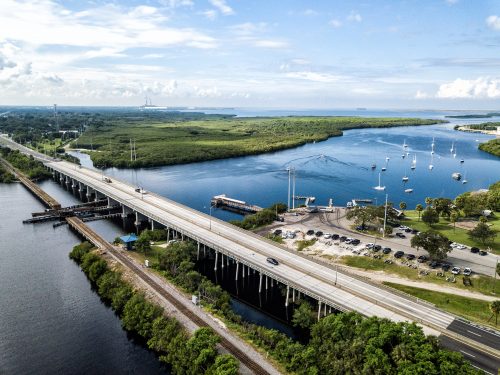 Williams Park in Gibsonton would be the proposed ferry terminal for the east side of the bay. The park is on the Alafia River and bordered by U.S. 41. A town hall-type meeting is planned for tonight, Aug. 1, from 6:30 to 8:30 p.m. at Center Place Fine Arts, 619 Vonderburg Dr., Suite B, Brandon. OBSERVER NEWS FILE PHOTO

According to HMS Ferries, which runs the current Cross Bay Ferry seasonal service from St. Pete to Tampa, and its development partner, the Palmetto-based South Swell Development Group, the two private entities have offered to design, build and operate a complete year ’round ferry system for Tampa Bay that would include commuter service from South County, or South Shore, to MacDill Air Force Base (MAFB), as well as evening and weeknight service between downtown Tampa, downtown St. Pete and South Shore. Ferry service would operate between 12 and 16 hours each day, seven days a week. The two private partners have offered the BOCC to cover all operating, maintenance and repair costs of the system over a 20-year period, a cost estimated at $104 million, with no subsidies from local taxpayers.

The private partners’ proposal requests Hillsborough County and other state and local public agencies to fund an estimated $36 million in capital costs for ferry terminals, docks, vessels and trams, all of which would be publicly owned and leased to the private operators.

Up to this point, one of the biggest obstacles to launching a trans-Tampa Bay ferry has been determining the location of a ferry terminal somewhere in the South Shore area. The private partners re-evaluated over a dozen sites a year ago. They then boiled down the choice of a site to one of three: Williams Park, Schultz Preserve and Kracker Road. Williams Park got the nod as the preferred ferry terminal location on the east side of Tampa Bay because it promised better ridership, lower capital costs, better accessibility and a smoother process for permits and acquisitions.

If Williams Park is the final solution, this will require acquiring property from Mosaic for the construction of a parking lot for at least 750 vehicles now and, eventually, 1,500 parking spaces. The Williams Park site would require a ferry terminal, ticketing and concession area, and docks for four ferry vessels. This site would include not only the ferry service but also the recreational park and boat launch, which are already in place.

HMS, the private ferry operators, will work closely with local and regional transit to improve bus and van pool service from various Brandon and SouthShore communities to connect to the Williams Park terminal.

On the west side of Tampa Bay, the proposed ferry service would embark at MacDill. The ferry commuter service would operate every 10 to 15 minutes, using three, 149 passenger, fast catamaran ferries. MacDill commuters could board at Williams Park and take the 15-minute ride across Tampa Bay instead of the 45-minute, stressful commute over the highway. At the MacDill terminal, a tram system would connect to most MAFB destinations. Roundtrip service would cost an estimated $15 per day and would include parking, the ferry, and tram service.

Weeknight intercity service would begin after the MacDill service is over and operate between 6 and 10:30 p.m. At least two ferries would circulate between South Shore and each downtown. Additional ferries would likely operate on evenings when events are scheduled at Amalie Arena or Tropicana Field. Weekend intercity service would connect St. Pete, Tampa and South Shore by using at least two ferries operating in a counter-circular mode, running from late morning to late evening.

“We cannot pave our way out of our transportation problems,” declared BOCC member Smith at a 2015 Apollo Beach meeting to discuss the possible high speed ferry. Since the ferry would go both ways, “this gives us (in South Shore) the opportunity to literally get a boatload of people to local events or to the Firehouse Cultural Center,” said Smith. 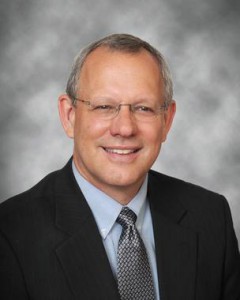 Ed Turanchik represents the companies trying to bring the ferries to Tampa Bay.

“This (ferry service) could create huge economic development for South County,” said Ed Turanchik, a former county commissioner, who now represents the private ferry developers, sees the high speed ferries as a viable and cost-effective transportation alternative in an era of high gas prices and increasingly overburdened and frustrating asphalt highways. “This is an opportunity for Hillsborough County to get it right,” said Turanchik, adding, “It (a ferry service) will be huge for South County’s military families and for taking people off the roads. It is the least expensive transportation option because it moves so many people for so little money.” Turanchik said the ferry project is finally moving in the right direction. “It is no longer a study, no longer an evaluation. It (ferry service) is a real, live project… finally. The ferry should be operational by 2022.”

The private partners claim that the capital funding for the proposed ferry project can derive from a range of sources, including the BP Oil recovery funds; Hillsborough’s new transportation sales tax revenues, since ferries are considered as fixed guideways; state matching funds and contributions from other local governments, as done for the Cross Bay Ferry seasonal service.

The proposed ferry service is also endorsed by the Tampa Bay Sierra Club and the chambers of commerce of St. Pete and Tampa. Kent Bailey, president of the Sierra Club of Tampa Bay, points out that by removing 2,000 commuting vehicles from our roads daily, the ferry project significantly reduces greenhouse gases. “We are one of the nation’s most threatened communities due to sea level rise,” said Bailey. “The development of a public transportation system is critical in the reduction of carbon emissions and critical to our community’s future.” 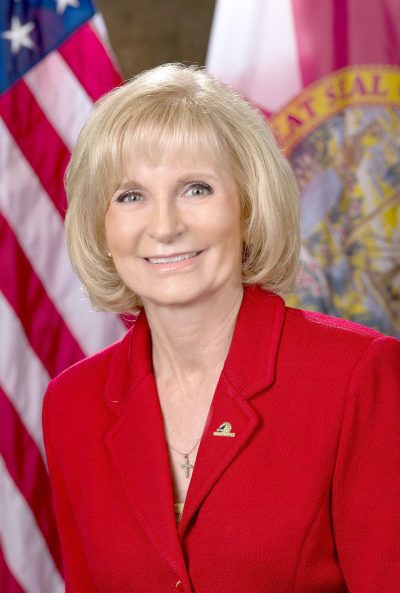 Commissioner Murman, whose district includes much of the South Shore area, said at a recent ferry meeting that the South Shore area “has not gotten its fair share of transportation dollars…and I have stood up for that at this board (BOCC) every single step of the way, trying to get more roads, buses, whatever we can put into South County. We will not fail to bring a ferry to South County. Failure is not an option.” Although Murman had said this in the past, at the May 15 BOCC meeting, she, ironically, cast one of the three losing, negative votes against moving the ferry project forward in the public-private initiative, preferring that the private developers handle the ferry project without Hillsborough County financial input.