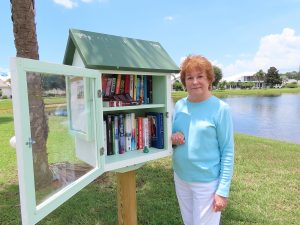 Catherine Andrews spearheaded the Villas on the Green little library project. She maintains the “stock” that serves a neighborhood of 75 houses.

For avid readers, the world we live in today is awash with opportunities for indulging that passion. Visit any waiting room, and you will find people reading — if not an actual book, then on their electronic devices.

There are many conventional sources for acquiring reading material — libraries, friends, bookstores, garage sales. The list goes on and on. And lately we hear of a less conventional source — mini library structures that look like giant birdhouses are found in some neighborhoods. They operate on the premise of “take a book, leave a book.”

You might wonder about these boxes. Who made them? Who created them? Who is the caretaker? There is always a story behind each box, such as the READBOX project in Riverview. A young girl introduced the mini library structures to her neighborhood as a Girl Scout project. In Wimauma, a Little Free Library project for children was initiated by the SCC Woman’s Club. Sun City Center resident Cliff Oldham, who helped the club with the program for several years, said the kids’ program doesn’t work quite like it is supposed to because the kids seldom return the books (or leave a book) because they want to keep them for their very own. “That’s not a bad thing,” he said.

In Sun City Center, the little libraries have started popping up only recently. The Little Free Library installed in the common area of Villas on the Green on S. Pebble Beach Boulevard is the brainchild of Catherine Andrews, a voracious reader. After she learned about the Wimauma project, she approached their 75-home neighborhood’s homeowner’s association for approval and funding. When they gave her the go-ahead, she took the plans available from the Little Free Library website to the Sawdust Engineers where president Roger Sawyer kindly accepted the project. 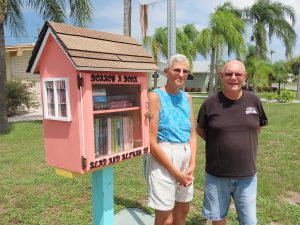 Andrea Peterson is caretaker for one of two little libraries on Fordham Avenue. Richard Kelly, neighborhood woodcrafter, constructed them.

“Roger was very helpful. He altered the design a bit to include a message box for notes, HOA newsletters, etc. That gives residents the opportunity to leave a note if they are interested in books of certain genres,” said Andrews.

Two “Book Nooks” on Fordham Drive are maintained by Andrea Peterson and Ann Fenimore, book lovers extraordinaire. The structures in front of each of their houses were built by neighborhood craftsman Richard Kelly, who also built one on Riviera Drive.

Joanne Gilray, administrator of the SCC Community Association Library, lights up when talking about the “little libraries.” She hasn’t seen those here but has seen them in other areas — some even in parks. Gilray is in favor of anything that gets books into readers’ hands. “I love the idea,” she said. “Not everyone can get to a library, but [a person] might be able to walk down the street,” she said. She pointed out that the SCC Library has a “book box” at the indoor pool on the CA Central Campus that operates on the same principle.

The Little Free Library movement began in 2009 in Hudson, Wisconsin, by Todd Bol as a tribute to his mother, a teacher who loved to read. He installed a model of a one-room schoolhouse in front of his house, filled it with books and added a FREE BOOKS sign. That gesture grew into the international movement it is today. According to its website (littlefreelibrary.org), its mission is to “promote literacy and the love of reading by building free book exchanges worldwide and to build a sense of community as we share skills, creativity and wisdom across generations.”