First grade is next big step for Apollo Beach youngster

While most 6-year-old youngsters are anticipating, with mixed emotions, that big day of starting first grade in a few weeks, an Apollo Beach rising first grader is licking his chops at the chance to participate in a national motocross championship. And unlike that first step into the classroom, which he will take alone, Jack Saracino will have plenty of company as a large entourage of family and friends will accompany him on his 850 mile trip, one way. For the up and coming first grader, it is a “dream come true.” 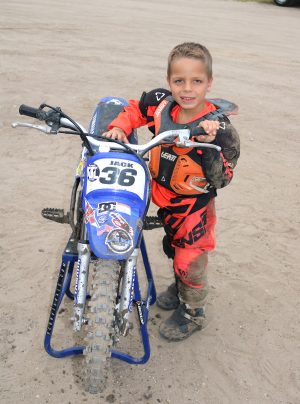 Jackie Saracino, 6, of Apollo Beach is ready to roll on his dirt bike at a national motorcross event.
STEPHEN FLANAGAN JACKSON PHOTO

The pintsize dirt bike racer got his start last year at the East Bay Raceway Park near Gibsonton when his mother, Jamie Saracino, a single mom who works as a nurse practitioner in an area emergency room, realized her son needed some motivation and a reward system “to do something about Jack’s lack of motivation and lack of discipline when he was a 4 year old in pre-school.”

As Jamie Saracino tells it, “So I sat down with Jack, and we agreed that if he was good and his behavior improved in preschool, I would get him a dirt bike.”

Using that carrot rather than the stick approach proved effective. Now, after a year and half on the dirt bike and numerous hours racing and practicing, Jack has qualified for the largest amateur motocross race in the world at the historic Loretto Lynn Ranch, just west of Nashville, Tennessee. Jack competed nationally for four months against nearly 20,000 hopefuls in the four-to-six-year-old age bracket to earn one of just 1,512 qualifying positions in the 38th annual Amateur National Motocross Championship set for July 30 through Aug. 3.

According to Tim Cotter, director of MX Sports – a West Virginia race production company, “This Amateur National at Loretta Lynn’s is the best of the best motocrossers in America and around the world. Just being here makes you an elite racer and a top athlete. A solid finish at Loretta’s would give you instant national recognition and a possible professional career.” Cotter pointed out that most of America’s top professional motocross racers, including James Stewart, Ricky Carmichael, Travis Pastrana and Ryan Dungey, have won Amateur National titles at Loretto Lynn’s.

Since 1982, the event has been hosted annually during the first week of August at the home of country music star Loretta Lynn in Hurricane Mills, Tennessee, and has served as a launch pad for some of the biggest names in professional motocross and supercross. The top finishers in area qualifiers and regional championships earn a gate position at the nationals at Loretta Lynn’s. Racers may enter a wide variety of classes, from minicycle classes for children as young as four – all the way up to a senior division for riders over 50. There are also classes for women and classes for both stock and modified vehicles. Jack is competing in the highly competitive 51cc Shaft Drive Limited and is an alternate for Special Limited, both in the four-to-six-year-old division.

The track is built on a section of the Loretta Lynn Ranch and Campground. The skills and stamina of a driver are tested with a variety of jumps, corners, and other obstacles. The special motocross track is used only once a year, for motorcycles, so there is no hometown advantage. Racers compete in three 15-to-20-minute races over the week, sometimes in grueling temperatures. Proper training and preparation are paramount.

Most riders attend the event with the help of their families. Many consider the event their family’s summer trip, nicknaming it the ”World Greatest Motocross Vacation.” In addition to the races, the week-long event hosts many family-friendly activities, including camping, swimming, talent show, concerts and live enterntainment.

Jack will make the approximate 12-hour trip to Hurricane Mills with his mother, Jamie Saracino; his sister, Madalyn Saracino; his father, Matthew Saracino; his aunt, Cindy Brown; his nana, Vickie Weston; his aunt, Danielle Collingsworth; and his cousins Colby and Caleb. Along with these family members, Jack is supported by Jim Neupert with 2Fastmx. Jack also receives help and training from his stepfather, Jonathan Romandetti, who has to stay behind in the SouthShore but works on Jack’s bikes regularly, bought Jack his first KTM 50 and got him into dirt bikes.

The race action will be broadcast live daily at RacerTV.com July 30 through Aug. 3. In addition, highlight shows featuring the event will air on NBC Sports in the fall. For more information on the AMA Amateur National, visit the series official website at mxsports.com.

Jack Saracino’s dirt bike adventures are made possible with the help of sponsors such as Butler & Boyd Law Firm, Barney’s of Brandon, Cobra of Florida, Carolina Cobra Connection, Cullen & Hemphill, Aunty Cindy Brown, and Tracy and Eric Sollitto. Jack has won 19 races in the last year and competes nearly every weekend at Tampa MX and other races in Florida and South Carolina.