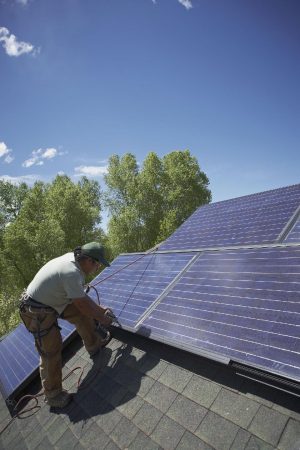 As an additional incentive for going solar now, the federal government will allow you to deduct 30% of the cost of installing a solar energy system from your taxes this year. This is the last year for the full credit.

If you’ve ever thought of going solar, now would be a good time to do so, said Dena Leavengood, Natural Resources Action Group co-chair for the League of Women Voters of Hillsborough County. Her organization is partnering with the national nonprofit Solar United Neighbors to form a third Hillsborough County solar co-op.

Thus far, more than 120 households have signed up for the third co-op and selected Solar Source as its installer. Its members receive significant discounts because of the co-op’s bargaining power. 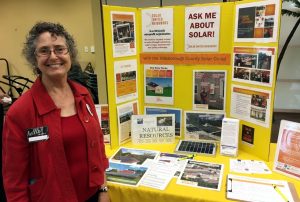 Dena Leavengood, Natural Resources Action Group co-chair for the League of Women Voters of Hillsborough County, invites area residents to join the county’s third solar co-op now forming by Aug. 2. If you’ve ever thought of going solar, now would be a good time to do so, she said.
LOIS KINDLE PHOTO

Anyone interested in joining must sign up at www.solarunitedneighbors.org/hillsborough by Aug. 2. “It’s free to join and there’s no obligation,” Leavengood said. “Once you do, you complete an online questionnaire about your energy usage and needs, and then a satellite view of your home is reviewed to determine if you could benefit from solar.”

A Solar Source representative will make an appointment and then come out to provide you with an individual quote based on your energy needs. He or she will tell you how much it will cost to go solar and the amount of time it will take you to recoup your investment.

“If you choose to, you can walk away,” said Leavengood. “If you decide to have panels installed, you will sign a contract directly with Solar Source.”

As an additional incentive, the federal government will give you a solar tax credit of 30% of the cost of the panels and materials this year. (This is the last year for the full credit.) And if you are also installing a new roof, you may be eligible for an additional tax credit, Leavengood said.

Apollo Beach resident Tim Bellon already has solar panels installed on his home and pool, and he has a solar water heater. He recently attended an overview of the project presented by Leavengood at Hillsborough Community College SouthShore and plans to join the co-op for its educational and networking benefits. 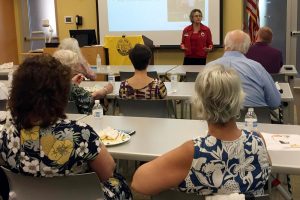 Dena Leavengood, Natural Resources Action Group co-chair for the League of Women Voters of Hillsborough County, met July 17 with about 40 area residents interested in learning more about a third county solar co-op and the benefits of joining it.
LOIS KINDLE PHOTO

Bellon recommends solar as the way to go for many.

“We had our panels installed nine years ago when I returned from Afghanistan,” he said. “Our bill has dropped $125 to $150 per month on average. I think (going solar) is good for the economy and the environment, and it will ultimately save you money.”

Folks who choose solar do so for various reasons. Those stated by Bellon are but a few. Others include having energy independence, taking control of your energy use, reducing pollution and producing your own power. “It’s basically saving the planet by reducing your carbon footprint,” Leavengood said. “Sunshine is free.”

This third Hillsborough County co-op is the 48th in Florida. For additional information, email naturalres@hclwv.org.