Home News Preserving the past
News 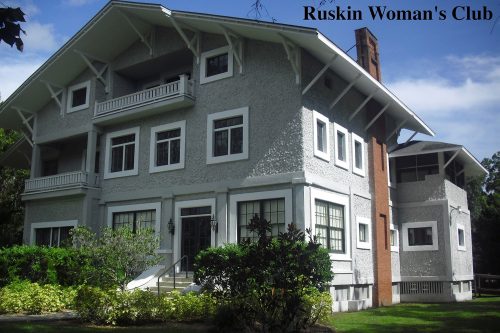 Once the home of Ruskin’s first college president, this three-story historic home on U.S. 41 in central Ruskin became headquarters for the Ruskin Woman’s Club in the last century and is listed on the National Historic Sites registry. However, it is not landmarked as a local historic asset. Built in 1910, it was a prominent feature on the first college campus.
Photo courtesy Mac Miller collection

“If we neglect the history of our communities, our children will, too.”

This is Dr. Arthur “Mac” Miller, direct descendant of a Ruskin founding family, historian and strong preservation advocate, paraphrasing the late Jacqueline B. Kennedy Onassis, one of America’s most history-conscious first ladies.

Moreover, that shared sentiment is echoed in Hillsborough County’s widely-applied comprehensive land use code, which emphasizes that structures and sites “…important to the understanding of the history of Hillsborough County possess special public interest and should be conserved and protected….”

Of greatest interest to most residents is the Historic Resources Review Board (HRRB), functioning within the county’s multi-faceted planning and development services section. The mission here is designating historic properties and assisting preservation of residential historic sites in unincorporated areas of the county with money for maintenance. The financial awards come from an annual $25,000 fund, according to Tom Hiznay, an executive planner working with the HRRB for the last four-plus years.

The second program, aimed at support for non-residential historic projects throughout the county, is administered by the economic development section. Under the Hillsborough County Challenge Grant program, according to its website, reimbursements for rehabilitation or restoration work of up to $250,000 per applicant, per project, per year may be awarded to further historic preservation or heritage tourism or related business and economic development. In keeping with its different objectives, the challenge grant operates with different criteria, and its application guide may be downloaded from its website. 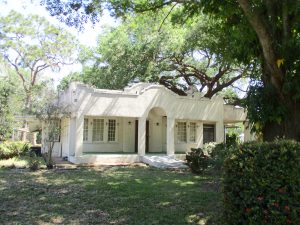 This Mediterranean style, one-story, stuccoed home on River Drive, near the Little Manatee River, could be another candidate for historic designation in Ruskin. Certainly more than 50 years old, the dwelling might qualify for landmarking because it is so indicative of an architectural style popular early in the 20th century.
Photo courtesy Mac Miller collection

Applications for designation or assistance with either residential sites or non-residential properties are no longer being accepted for the current fiscal year, due at least in part to insufficient time remaining in the funding year for their review. The challenge grant application timeframe is expected to reopen in 2020. HRRB funds for the 2019 fiscal year were not awarded, but Hiznay said he expects the same monies to be available for the 2020 year.

Miller noted that the lack of HRRB residential maintenance awards during the 2019 fiscal year cannot be attributed to a lack of historic structures. A former member of the HRRB for more than a decade, the local historian has estimated there are dozens of qualifying buildings in South Hillsborough, alone, and, the advantages of historic designation are several, including tax breaks, cash awards for maintenance and business opportunities, not to mention community contribution.

No, the underlying reasons, he added, may well be the “myths” that have grown up around preservation over the years. “It’s been falsely stated that when a residential property owner landmarks (obtains local historic structure designation) a home, he [or she] cannot build anything new on the property, the site becomes a public property, tours of the home will be required, the property will become more difficult to sell [and] changes cannot be made to the dwelling’s interior,” Miller asserted. “None of this is true!” 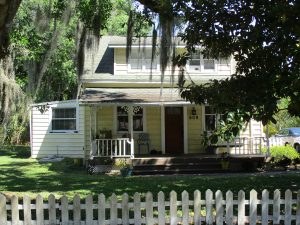 A possible candidate for landmarking under Hillsborough County’s historic preservation program is this frame bungalow on 4th Avenue SW in Ruskin, known as the Elsberry House. Built in the mid to late 1920s, the two-story home sheltered members of the Elsberry family who were among the early local settlers and were engaged in lumbering and farming, as well as turpentine harvesting.
Photo courtesy Mac Miller collection

Historic preservation is aimed at saving and protecting only the exterior of a structure, at keeping the aesthetic and appearance so that it reflects the aspect of its history deemed worthy of maintaining, Miller said. How the homeowner designs or configures the interior of a structure is entirely up to the owner. Similarly, the “public property” as well as the “home tours” notions simply are not related to a HRRB designation or grant, he added.

As for building on the same site hosting a landmarked dwelling, this situation would become an issue only if the entire site were designated rather than the house alone, Miller stated. And an already-landmarked historic home could be considered at an advantage in the resale market because the historic-level criteria had been met for the buyer, he suggested. What’s more, it is possible to withdraw a landmarked home site from the program, if the owner so desires.

Hiznay pointed out that the criteria for landmarking a Hillsborough house consists of 11 key points, beginning with its age: at least 50 years. Beyond this, the dwelling should meet at least one of 10 more characterizations, such as having a connection to a historically important person; having been the scene of an event significantly affecting the community, state or nation; or having yielded archaeological information important to history. 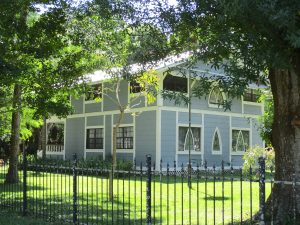 Now a private residence, this early Ruskin architectural treasure served as the art and drama center for the first Ruskin College. While it has been altered considerably inside, it remains eligible for landmarking because its exterior has been changed very little, and it is a key component in the community’s early history.
Photo courtesy Mac Miller collection

A dwelling potentially eligible for landmarking might embody a distinguishing architectural style or specific historical period or construction method. It might be the work of an architect or builder who has influenced the community, state or nation. It also might contain design elements or materials reflecting significant adaptation to the Florida environment. It might exemplify particular cultural, political, economic or social trends of the community, state or nation.

Regardless of which claim to historical fame the structure might present, the process begins with an application, accompanied by whatever sketches, photos or documents necessary to explain or support the application, Hiznay said. The process continues with consideration of the request by the HRR board and, upon its recommendation, may undergo review by the county’s planning commission and, ultimately, review approval by Hillsborough’s Board of County Commissioners. Because of the varied schedule of these meetings, an HRRB application may be in progress for six months or so, the executive planner said.

With the historic designation in place, an owner may apply for a cash award covering 50% of the cost of work needed to maintain the landmarked structure, he added. No fees are imposed on the property owner for either the hearings or any investigation of the application claims. All applications are initiated by the property owner.

Miller did just that a few years ago. The grandson of Dr. George McAnelly Miller, who, with his wife, Adaline Dickman, built the first Ruskin College more than a century ago, Miller owns and lives in one of Ruskin’s most historic homes, a three-story built by A.P. Dickman in 1910 on the south shore of the Ruskin Inlet. And, when the residence, which has architecture known as Queen Anne with Prairie elements, required roof repair, the retired college professor applied for and received a grant sufficient to cover half of the cost. The home, which today shelters the contemporary Miller family, is listed on both local and national registries of historic sites.

The Miller residence is one of four Ruskin homes – all in use today, but not all as dwellings – of high historic value associated with Ruskin’s founding and the early college. Three of them have not been landmarked, he said, although several advantages to the owners would accompany historic designation.

Miller and Hiznay agreed that the property value of a home designated historic is enhanced. The owner then enjoys a 10-year vacation from additional ad valorem (property) taxes on that increased value. The historic designation on a Hillsborough home also brings with it a special zoning – SPI-HC – which permits operation of a for-profit business in the premises, such as a bed & breakfast or a tea room, an antique shop or similar enterprise. Plus, the owner can apply for a grant to help keep up the designated property. This grant reimburses that owner up to 50% of maintenance job costs, providing a licensed contractor does the work.

And, of course, historic designation is a contribution to the community around it, Hiznay emphasized. Quoting from the land use code, the planner noted that promoting and preserving Hillsborough’s historic assets serve to “…enrich the lives of citizens and visitors alike…” by providing “…expanded economic opportunity…” plus “…opportunities to stabilize and enhance property values.”