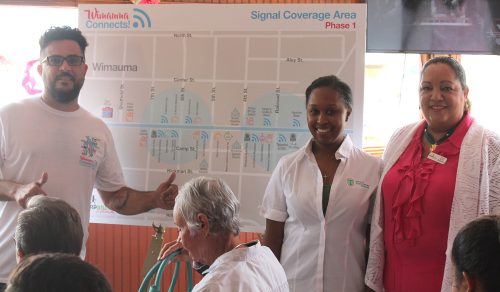 WIMAUMA — Another small but important step in closing the technology gap, the so-called “digital divide,” was taken in downtown Wimauma last week. The digital divide refers to the gulf between those who have access to computers, to the Internet, and to cell phones, and those who do not have access – for whatever the cultural, social, economic or preference reason.

Speaking at the launch party, Liz Gutierrez, CEO of Enterprising Latinas, said, “We are grateful for the funding support for this project, which comes from Hillsborough County and from Allegany Franciscan Ministries Common Good Initiative. Gutierrez added, “Both Enterprising Latinas and Allegany have committed their resources for two more years to continue to expand this network through Wimauma and bring and expand internet access to the community.” 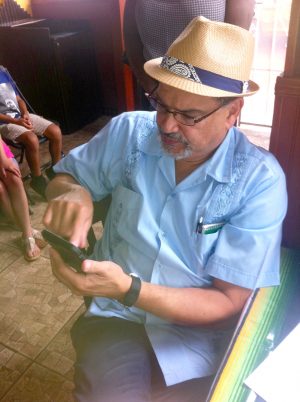 Manuel Ayala sending and receiving the first messages on the newly installed Wimauma Connects! free wireless network. Ayala was at the launch of the Enterprising Latinas’ project last week in Wimauma. He is executive director of the Wimauma Opportunity Center.
STEPHEN FLANAGAN JACKSON PHOTO

“Connecting on the Internet for social and business reasons is the way to go nowadays,” remarked Lucy Stewart at the Wi-Fi network launch event. Stewart is the board chair of Enterprising Latinas.

Enterprising Latinas has created “Wimauma Connects!” as a new pathway of opportunity for residents and businesses in the area. Wimauma Connects! is the first mesh, or network, of wireless antennas in the area. The wireless network is comprised of 15 antennas that create a mesh of access points along S.R. 674 from 7th to Edina streets. This Internet mesh network provides free online access to more than 20 businesses and at least 25 homes in the area adjacent to the corridor. These businesses, residents and visitors, including those shopping at participating locations, have 24/7 access to the world-wide-web for free.

The organization has partnered with nine Wimauma businesses along the corridor where the wireless antennas have been installed. This includes two service portals, one at Royal Kutz barbershop and another at La Taquieria El Sol restaurant. Wimauma Connects! is currently available at these two businesses, as well as at Aquarius Water, A&A Tire Shop, Swiger’s Crates & Boxes, La Fruteria Mexicana, Ana’s Restaurant, Ali’ Snacks, Centro America and El Mariachi Loco. 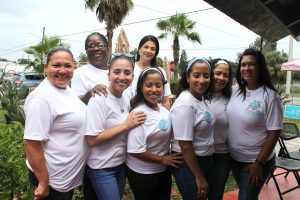 The next phase of project Wimauma Connects! is set to anchor the wireless services north and south of S.R. 674 through both Center and Camp streets, thereby extending the free service to more than a third of the households in the area. The installation of the antennas is being performed by Phone-Link FL, a Tampa-based telecommunications company, which has discounted its services by as much as 20 percent as part of its contribution to the Wimauma community.

“This project allows connectivity and access to information and to communication,” said Santos Morales, director of economic prosperity for Enterprising Latinas. “We are here to help make Wimauma stronger and to realize its potential.”

As the digital divide is narrowed through this technological development, Wimauma residents and visitors can enjoy free Wi-Fi while eating at the many restaurants in the growing Wimauma downtown area. Also, job seekers can apply for employment online, parents can help their children with school homework, children can conduct online research, families can maintain contact with friends and family near and far, individuals can check their email. Other online services can also be accessed, such as shopping online, paying bills online, browsing for services in the community, and just plain, old socializing. 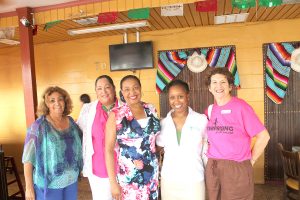 Enterprising Latinas, Inc. (ELI) is a nonprofit organization that creates economic opportunities for women.“If momma is happy, then everybody is happy,” commented one of the speakers at the group’s launch event. ELI leads personal development and family support programs, workforce and entrepreneurship trainings, as well as community initiatives to help women develop a path to prosperity. ELI believes that when women do well, their families do well and our communities do better.

ELI has focused its work in Wimauma and adjacent communities since 2014, where it also launched the Wimauma Opportunity Center in 2018. It has collaborated with the Common Good Initiative, launched in 2014 by Allegany Franciscan Ministries, as a place-based funding initiative, designed to mobilize communities towards better health and wellness through community engagement, a long-term commitment of resources, and increased collaboration of residents and stakeholders. The initiative is led by the Wimauma Council for the Common Good, a 12-member advisory group comprised of individuals who are residents and stakeholders of Wimauma.

Wimauma was officially founded in 1902 on Lake Tiger, now Lake Wimauma, by C.H. Davis, on an original railroad route between Durant and Sarasota. Davis had three daughters: Wilma, Maude and Mary. He took the first few letters of their names, and, voilá, the new, small settlement was christened Wimauma.

Wimauma is located in erstwhile rural Hillsborough County, in an area that is now beset with hyped-suburban sprawl. The official boundaries of Wimauma stretch west to Sun City Center, north to the Valencia Lakes subdivision, south past the Little Manatee River State Park to Manatee County, and east to Fort Lonesome. It meanders east through pasture and farmland past the Wimauma “airport” – mainly with cattle grazing and agriculture now being filled with encroaching residential subdivisions. 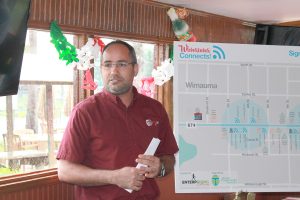 Wimauma has two public elementary schools, both with a heavy majority of Hispanic students. Wimauma is also home to the evangelical Church of God convention center, campgrounds, cottages and temporary RVs.

The town was once (no more) an incorporated city in the mid-1920s with a population of 400. The 2010 census registered 6,373 people, and it continues to mushroom with populations in the central, as well as surrounding areas. About 70 percent of the present population is Hispanic or Latino.

Although a number of non-Hispanics also call Wimauma home, it is considered an isolated community in the midst of transition from an agricultural, migrant-worker center to a more suburban community. Employment opportunities are limited, particularly for low-income women. Internet access in Wimauma’s low-income households is also limited.

A May 2019 article from the Pew Research Center about the digital divide concluded that despite advancements in technology “more than four-in-ten [households] don’t have home broadband services.” The Pew Research Center studied data from the most recent US Census and determined that Internet access inequality intrudes on a child’s ability to learn. The analysis known as “the homework gap” points out that over a third of low-income households in the U.S. don’t have access to broadband at home. In Wimauma, where 39 percent of households live at or below the county’s poverty levels, access to the Internet is a scarce resource. Wimauma Connects! is now closing the digital divide and opening opportunities in this community.

For more information about this initiative, call Santos Morales, director of economic prosperity at 813-699-5811 or email at santos.morales@enterprisinglatinas.org.