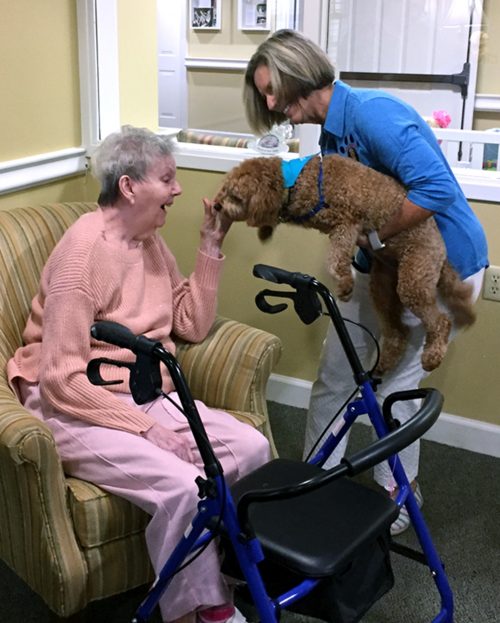 It was also a big day for Daisy. The 18-month-old miniature Goldendoodle had recently received her credentials, and this was her first visit in her new role.

As her owner, Ellen Kleinschmidt, introduced Daisy to the 26 residents assembled around the living area, it was as if a fog had lifted, even if only momentarily, in their lives.

Some reached out to touch Daisy’s rabbit-soft fur, some framed her face with their hands, and others simply said, “Hi.” Everyone smiled. 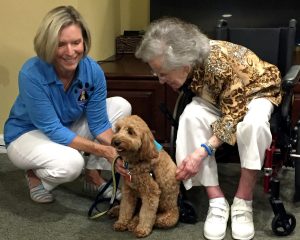 As Daisy stops by to meet Agnes Dively, the Clare Bridge resident gets up close to pet her.

Kleinschmidt, a retired elementary school music teacher, broke out in song a couple of times. Many of the residents happily sang along with her as she sang, “Daisy, Daisy” (“A Bicycle Built for Two”), “You are My Sunshine” and “How Much is that Doggie in the Window.” During the latter, Kleinschmidt temporarily got stuck on its lyrics, and a resident’s family member chimed in to help.

“People with dementia often become trapped inside a world that doesn’t allow them to experience everyday joys like you or I [do],” said Connie Nixon, Clare Bridge programs manager. “Daisy’s visit changed that for our residents.

“She brought an opportunity for them to both give and receive love without having to face any of their daily challenges,” Nixon continued. “She was sweet and gentle, and everyone just loved her. We are so happy she will be visiting us every week now.” 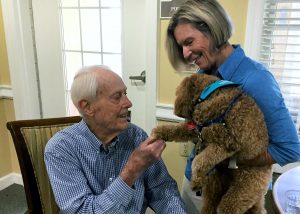 Ellen Kleinschmidt introduces Daisy to Ray Heck. After this initial introduction, the therapy dog will be returning each week to visit with residents and staff.

Kleinschmidt agreed. “I was very proud of how Daisy did on her first day on the job as a therapy dog,” she said. “The motto of the Alliance of Therapy Dogs is ‘sharing smiles and joy,’ and Daisy did just that. It’s a joy to be able to share my best friend with others and add so much to their day; however, I know as a team we’ll receive so much more than we give.”

Daisy’s came to live with Kleinschmidt and her husband Kevin in February.

“Once we decided we wanted a miniature goldendoodle, we began looking for a reputable breeder in Florida,” she said. “We found the perfect place at Mini Goldendoodle Farms near The Villages. We visited a litter of puppies there in December, made a deposit and were put on a waiting list.”

The Kleinschmidts expected to wait six to nine months for a puppy, but they unexpectedly got a phone call in mid-February that a fluffy, golden bundle of fur was available. 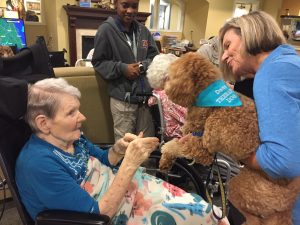 “The people who were supposed to take Daisy changed their minds and wanted to wait for a larger dog,” she said. “The breeder remembered that we wanted a smaller dog and gave me a call.” It was love at first sight for the couple and their new pup.

Kleinschmidt said she recognized almost immediately that Daisy had the makings of a great therapy dog. “She has a sweet disposition, she’s always ‘smiling’ and is anxious to please,” Kleinschmidt said. “She’s smart, learns quickly and loves learning new tricks. She’s a very happy, friendly dog who loves people, and I wanted to share her with those who are no longer able to own a pet or are in a healthcare facility, separated or away from their dogs.”

First certified as a therapy dog, Daisy and Kleinschmidt are also a registered R.E.A.D. (Reading Education Assistance Dogs) team. As such, they are one of more than 6,000 teams from all 50 states and 25 countries. In the fall, the pair will be headed to Reddick Elementary School, where they’ll volunteer to help children learn to love reading. 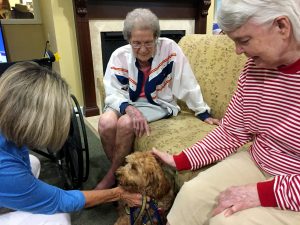 As a therapy dog, Daisy can be taken to visit hospitals, nursing homes and the like. As a R.E.A.D. team, she and Kleinschmidt can go into libraries and schools. Daisy is trained to provide love, comfort and sometimes entertainment to others.

Therapy dogs are considered pets and must follow the same rules and guidelines as any pet dog. They can’t just drop in. They must be given visiting rights.

Daisy was 12 weeks old when she and Kleinschmidt began training. “We took the AKC Star Puppy Class at Southeastern Guide Dogs, where we worked on socialization and basic obedience,” Kleinschmidt said. “We followed that with the AKC Good Citizen class, which set us up perfectly for our therapy training. Lastly, we took a dog therapy class, where Daisy had a chance to interact with residents of Concordia Village (in Tampa) and practice good manners and friendly greetings.”

Kleinschmidt had to pass a background check and was tested on her basic handling skills. Those were followed by supervised visits by an Alliance of Therapy Dogs tester, who observed Daisy’s behavior and Kleinschmidt’s ability to safely handle her and demonstrate her dog could safely interact with people in animal-assisted functions. 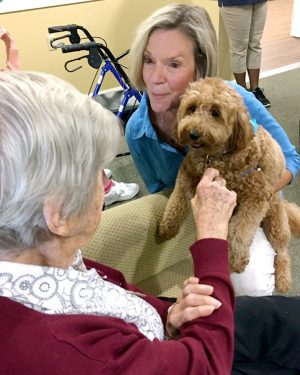 Daisy meets Helen Robertson. The puppy was universally received with warmth and affection.

Daisy’s parents were a golden retriever and toy poodle. She’s a small “doodle,” weighing only 17 pounds.

The Alliance of Therapy Dogs is an all-volunteer, 501(C) 3 nonprofit organization based in Cheyenne, Wy. The international registry of certified therapy dog teams provides testing, certification, registration, support and insurance for members who volunteer with their dogs in animal-assisted activities.

“We have teams visiting hospitals, schools, juvenile detention centers, prisons, even court to sit with children,” said Billy Smith, the alliance’s executive director. “We are also at 63 airports around the country to provide stress relief.”

For information on the Alliance of Therapy Dogs, visit www.therapydogs.com.

For information on R.E.A.D., visit www.therapyanimals.org/Read_FAQ.html.