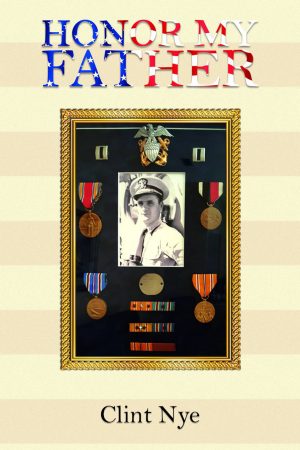 The “Greatest Generation of Americans” will soon be gone. In his new biography, Honor My Father, author Clint Nye uses the heroics and achievements of his father, a World War II Navy veteran, to portray the greatness of this group and also illustrate our responsibility, as readers, to ensure that their sacrifices and successes are never forgotten.

A true story of college men who came together at reserve training while in Annapolis, Honor My Father is also a passionate story about the author’s growing up with the “nicest” and the “smartest” man he’s ever known.

Nye, currently a resident of Apollo Beach with his wife Linda, holds true to the dedication of his father as the purpose for his writing. “Honor My Father is a compassionate, heartfelt effort to tell the story about my dad and his time on the planet. I honor Dad and the men of his Harvard class of 1942, as well as his Dartmouth Navy Ensign class, just prior to his entering the war,” says Nye, who formerly lived in Chicago; Athens, Ohio; and Orlando. This compelling story of a depression-era kid’s growing up with strong religious beliefs instilled in him by his mother also serves as a passing of the generation torch from “the greatest generation” to the “boomer generation.” Honor My Father is as well written as it is relatable and familiar not only to those from the “greatest generation” but also to those who want to learn more about them and their time.

Asked what inspired him to write the book about his father, Clint Nye responded: “My dad was one of the hundreds of members of the ‘Greatest Generation’ who saved the world in WWII and later came home and built America, serving industries and major corporations, unprecedented with their success to grow jobs and communities, [using] their education, military service, and real world learning and teaching. In the Navy during WWII, nine out of 12 officers were from the ranks of the reserves and not career Navy. They teamed together under impossible odds to face and defeat the largest Japanese Navy of all time. Their stories and their awards were something they really did not like to boast about. Most of them kept their medals in the basement in a small box. I determined after extensive research that this story[of my father] needed to be told as only 30 Benson Class Destroyers were built during the war, and their crews earned a total of 174 Battle Star Citations, one Presidential Citation and two Navy Unit Commendations, posthumously. My dad was one of the nicest people you would ever have known. [He was] smart, as well, and he never put himself above anyone, which is a major component of this story. When he passed, I knew then his record of achievements was noted as a place I hoped to get to in life but know I never will.” 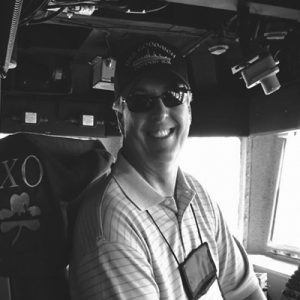 Nye then discussed how long it took to write the book about his father, and what all went into it. “The core portion of the book, regarding my personal story and relationship with my dad took only a couple of years,” he said. “However, [it took] another year of research at Naval Archives in DC and verifications of the Naval Task Force activities as written by the Navy for the permanent record of its sea battles and Battle Star Awards. I coupled all this with the interactions of the crews that worked on board with my dad, who served on two destroyers, the USS Bancroft and, later, the USS Goodrich. I was able to thread his story of service and mention all the crews on ships he served with to honor all of them. My dad’s Navy files, war records and assignment were kept in one of his old trunks. The cover of my book is the actual photo of him, serving on the destroyer, with his campaign medals and bars,” said Nye. “ I am very pleased to see this as the cover of my book.”

Clint Nye has over 35 years of experience in public sector and private corporate employment. Recently, he was on the DOJ Team for GIS enterprise solutions and sales to federal law enforcement: DEA, ATF, USMS, U.S. Courts, U.S. Attorney’s Office. He was also recently assigned to the National State and Local Public Safety Team as an Industry Solutions Specialist for law enforcement. He has represented several major corporations in sales of IT technology to the public sector.

Nye has over 60 police service commendations, coupled with corporate awards, supporting public safety nationally. He was a working cop in the streets of Miami and Broward County during the major drug wars, Mariel boatlift invasion and police “river cops” corruption investigations. He is writing about his experiences for the future publication of GOP, Generation Of Pigs, influenced by the hatred towards police and the commendations hard-working honest cops received.

Honor My Father, published by Austin Macauley, was released in June and sells for $25.95, ISBN:9781947353534. It is available on Amazon and at Barnes & Noble, as well as at other bookstores around the country.