A celebration for all ages

On Independence Day, the Sun City Center Community Hall was an impressive display of patriotism. A steady stream of visitors seized the opportunity to visit the new SCC Veterans Memorial, located in front of the hall, with its flags of every military organization flying proudly. Inside at the community breakfast, veterans’ photos were scrolling on all four television screens, surrounding the sea of red, white and blue attire of patrons (1,248) and volunteers serving them.

Floyd and Benda Curvin, led the army of 175 who gave their time and energy to make the hearty pancake breakfast event possible. “Our volunteers came in as early as 6 a.m. Members of the SCC Organ and Keyboard Club provided music all morning,” said Floyd. “And the Community Association maintenance crew spent two days setting up and taking down Community Hall. We are sending a huge thank you to all those who helped, as well as to those who turned out to support the event.”

The fun at the Community Association’s Central Campus started early as the 90+ degree day enticed many into and around the pool. At mid-morning, Spirit Entertainment began music for karaoke at the pool, and many local singers were eager to perform. The 3-DOM Band took over mid-day, performing lively music in the bandstand area.

Some club rooms were open for browsing and shopping, and for the second year, the SCC Model Railroad Club had assembled a panoramic train display that brightened the eyes of many young visitors.

A food stand operated by Charlotte and Alan Clark (C&J Specialties) added to the festival atmosphere as the aroma of Italian sausages and such wafted through the air, tempting hungry patrons. Café di Luna was also open in the Atrium for those who preferred to dine inside, and the free ice cream sandwiches, provided by the CA, were a heartily welcomed sweet treat. 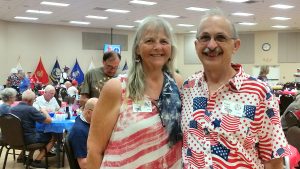 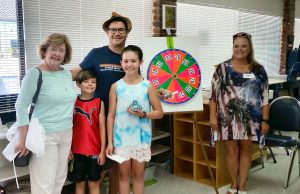 Margaret Wilson’s New Jersey family browsed the Potter’s Wheel where granddaughter Eleanor was thrilled with her 30% discount from “the wheel,” manned by Debe Alen. 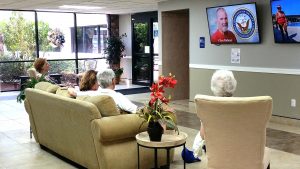 On the CA Central Campus, some escaped the heat by opting to view the display of veteran photos that ran 24/7 in the Atrium.
MORE PHOTOS ONLINE at www.ObserverNews.net 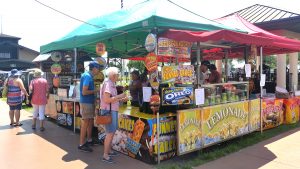 The aroma of C&J’s festival fare was assurance that no one went away hungry. 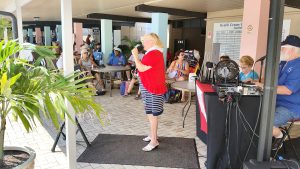 A rousing rendition of “God Bless the USA” by Salvina Tannenholz brought poolside loungers to their feet to “stand up for America.” 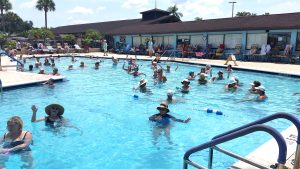 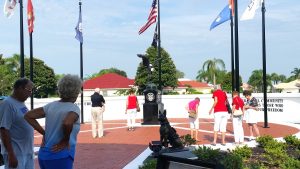 Many guests at the holiday community breakfast took the opportunity to visit the SCC Veterans Memorial and to locate their bricks, honoring veterans in its foundation. 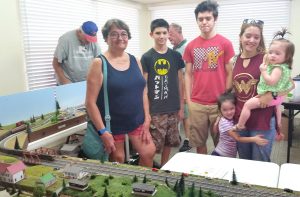 Valerie Krasko suspected her family from Rhode Island would enjoy a special “N” scale (1:150) display of trains set up by the SCC Model Railroad Club. She was right. 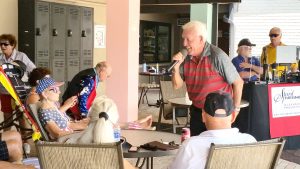 Gary Hart didn’t need the karaoke screen to perform I Did It My Way for the poolside crowd.

No more texting while driving!