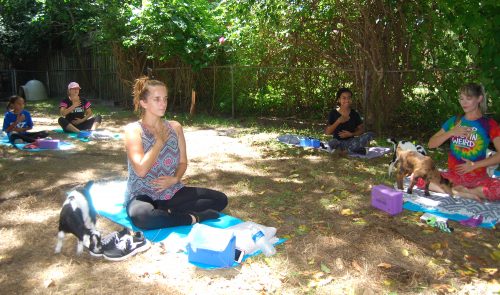 Some people like goats. Some people like yoga. If you like both, you’re in luck. Now you can practice goat yoga in Manatee County. Down on the Farm Yoga started offering yoga sessions at M&M Farms, 3820 36th Ave. E., north of Ellenton on July 4. Sixteen people had signed up.

It sounded like something fun to do,” said Mark Colvin, who owns M&M Farms with Melody Besler. “A lot of people enjoy animals, and this a good opportunity to come out and spend some time with them while having fun with yoga.” Colvin came up with the idea with yoga instructor Austin Judd when she came into the Shabby Shack Flea Market, looking for a vendor’s booth to rent. Colvin and Besler also own the Shabby Shack Flea Market, 1127 36th Ave. E. in Ellenton. 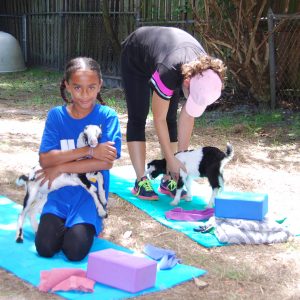 Maya Chang, 10, cuddles a goat, while her mother, Marisol Chang, tries to do a yoga pose, with a goat in the way, during a Down on the Farm Yoga demonstration class at M&M Farms, north of Ellenton.

Judd, who was born in Bradenton but moved away when she was five, came back to the Tampa Bay area to attend high school in St. Petersburg and now lives with her husband, Alexander Judd, and their son, Odin, 2, in the home her grandparents owned in Bradenton. She is an artist and sews fashion pieces. Her father, Richard Grice, was also an artist and well known in the local art community, she said.

Looking for a place to sell some of her art pieces was what brought Judd to the Shabby Shack. “I went there looking for a booth to sell my artwork,” Judd said. “I like to do vending, so I went to Shabby Shack to ask about space. I saw the sign about volunteering at the farm, and I started talking to Mark. We talked for hours, and I left as a partner in Down on the Farm Yoga,” she said. Judd, who has been practicing yoga for 20 years, became certified as a yoga instructor about a month ago. “I finally got the opportunity to have the [most fun] yoga experience; why not get certified,” the Bradenton resident said.

She explained that the classes would be for beginners with variations so more practiced yoga participants can go further if they want. “You get to experience the goats and being outside and in nature. How often do you get to do yoga outside?” she asked. 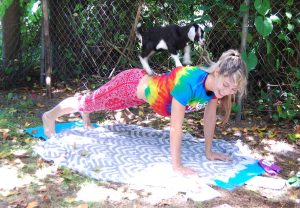 Yoga instructor Austin Judd goes through a yoga pose with a goat during a Down on the Farm Yoga demonstration class at M&M Farms, north of Ellenton.

Goat yoga became popular around 2015 after there were news reports about Lainey Morse of Albany, Ore., starting classes where thousands were signed up. In one report, Morse said using goats was like animal-assisted therapy for some of her clients.

At Down on the Farm Yoga, as the class goes through the yoga routine, about six or seven baby goats, no bigger than 18-inches tall, wander around. Being curious animals, they walk up and smell, nuzzle, or climb on the participants.

“Yoga was really fun,” said 13-year-old Sofia Chang, who was part of the team helping Judd work out the bugs earlier this month, “even with the goats being distracting.” Sofia, and her sister, Maya, 10, spent a lot of time cuddling with the baby goats in between the yoga poses.

The girls’ mother, Marisol Chang, also tried out goat yoga and found it fun. “The yoga was great,” Chang said. “It’s always good to do something nice for your body.” 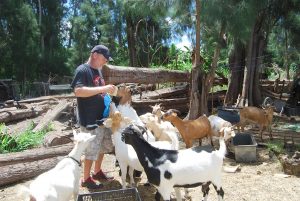 Mark Colvin, co-owner of M&M Farms and Shabby Shack Flea Market, feeds some of the goats he has on the farm.

Doing something good for her body was the reason Judd started practicing yoga 20 years ago. I was having a lot of hormone changes, and the doctor didn’t know what was wrong,” she said. She read how people who practice yoga can control their bodies and thought this would be good for her. “It allowed me to connect mind to body, so I could understand what it really needed,” Judd said. “I learned the difference between craving and needing something, like if I craved chocolate, maybe my body really needed magnesium.

“Finding yoga was a very important moment for me,” she said. Practicing yoga led Judd to become a certified neuro-muscular massage therapist, which she practiced for four years. But she moved on to modeling and acting around 2010 because the opportunity came up. “It was something I always have been interested in,” Judd said.” A friend showed me how to get started, and I went to a photographer for some photo shots for my portfolio and have been doing it ever since.” 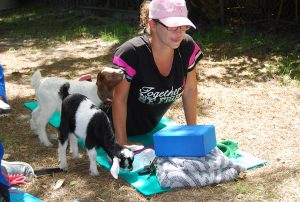 Marisol Chang performs a yoga pose, with the help of two young goats, during a Down on the Farm Yoga demonstration class at M&M Farms, north of Ellenton.

Visiting the Shabby Shack flea Market, seeing the sign about volunteering at Down on the Farm, and talking with Colvin refocused Judd’s interest in yoga. Seeing that sign also inspired Marisol Change, who thought that would be a good thing for her two daughters.

“We’ve been talking about working with farm animals,” Chang said. “I saw the sign and thought this would be a perfect opportunity.” They have been helping to feed, water and pick up after the animals for a few weeks. “We get exposure to a lot of animals you don’t typically get to interact with,” Chang said. 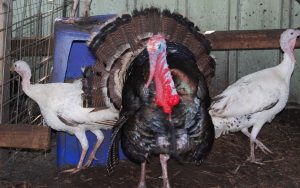 A Tom turkey tells everyone who is the boss at M&M Farms.

“It’s good for the girls to see what it takes to take care of animals,” their mother added.

There are 36 animals at M&M Farms — turkeys, chickens, warthogs, ducks, geese, and, of course, goats.Many of the animals are rescued from people who no longer can take care of them, Colvin said.

To learn more about Down on the Farm Yoga, visit its website at downonthefarmyoga.com or call 941-565-8285.

Judd has a website for her modeling at austinJudd.myportfolio.com.