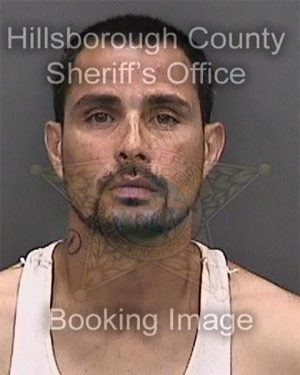 In the wee hours of Friday, July 5, barely past July fourth’s midnight, a neighbor heard an ironic, plaintive supplication from a man on his front doorstep on the corner of Shell Manor Drive and 15th Street in Ruskin. According to the neighbor, the man was pleading with someone inside the house, shouting, “Baby, let me in. I’m sorry this happened. It ain’t gonna happen no more!”

Those words, “It ain’t gonna happen no more,” were prophetic because the 37-year-old man, Angel Ramos Otero, seeking to enter his own house, was shot minutes later by a pair of deputies and died before noon Friday in the hospital.

The neighbor with the alert eyes and ears is Luis Escamilla, who provided the graphic account to police and news media, telling them he was peacefully sitting on the porch outside his home nearby when he heard the banging and shouting coming from a neighboring home at 330 Shell Manor Drive. Escamilla said that at about 1:30 a.m., patrol cars from the Hillsborough Sheriff’s Office suddenly pulled up with the ominous flashing of blue lights. The way Escamilla tells it, he heard deputies order his neighbor, “Drop what you got in your hand!”

Escamilla, 46, recounts that the man “came toward one deputy, and that’s when they shot him.” Escamilla says Ramos, a landscaper, dropped to the ground after being shot, “flopping like a fish” and screaming, “‘I’m hurt, I’m hurt.’” 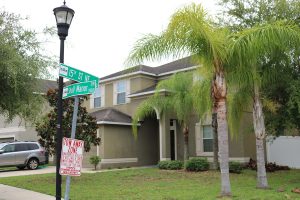 The home where the shooting took place.

According to police reports, deputies were responding to the two-story home in a tree-lined subdivision off Shell Point Road for a domestic violence call. Upon arrival, the deputies came in contact with a 37-year-old male, who was waving a large knife in the front yard of the home. A woman and several children were inside the home. The man refused to put the large knife down and approached the deputies in a threatening manner. At that point, continues the police report, Master Deputy Jessica Ennis and Deputy Daniel DeLima, in fear for their lives, fired multiple shots at the man. He was medevaced from the scene to a local hospital. The suspect, who was also facing charges of Aggravated Assault on a Law Enforcement Officer, died at Tampa General Hospital some eight hours later.

The HCSO released a statement saying the dead suspect had 30 prior felony charges, including felony possession of a firearm, carrying a concealed firearm, aggravated assault, domestic battery, aggravated child abuse, and carjacking. His most recent scrape with the law was barely a month ago in Tampa, a pending case involving his fleeing in his car while in possession of both marijuana and ammunition.

According to HCSO protocol, the two deputies involved in the shooting were placed on administrative leave, pending a full investigation. The deputies, not injured, are Ennis, 37, a 12-year veteran with the HCSO, and DeLima, 25, a three-year veteran of the HCSO.

The HCSO refused to release the dead man’s name, but his sister divulged his identity and his troubled past, as well as his future aspirations to lead a better life.

The sister, Shaina Otero, 31, told news media “I do not believe for one second my brother would lunge at an officer.” She added that her brother and Shequita Brown, a certified nursing assistant, had bought the Shell Manor home in 2015, the same year they were married, but they were currently estranged. They had a young son and a daughter together. Ramos had a 14-year-old daughter

from a previous relationship and Brown already had six children “blessed to have a stepfather who treats them as his own” according to Brown’s Facebook page. Ramos’ sister said her brother, Angel, and Brown were estranged, and he was living with a friend but wanted to salvage his marriage with Brown, who wanted a divorce.

Otero disclosed that her brother, a Leto graduate, was born in Puerto Rico and moved to Florida with his five brothers and sisters after his father died. She said the family was poor, and Ramos was bullied as a youngster.

“His whole life he had to put on this role of toughness,” the deceased’s sister told news media in an interview, adding, “We were talking about opening our own landscaping business by the end of the year.”

Shaina Otero and her family are skeptical that Ramos would come at deputies with a knife. Relatives of Ramos want to view the video evidence.

“I wish I could tell him I love him one more time,” Shaina said tearfully, calling her brother’s cell phone after learning of his death, in forlorn hopes Angel would answer.