Home News The man behind the mic
News

The man behind the mic

Swartz is the father of Sun City Radio 96.3 FM on the dial and on the internet 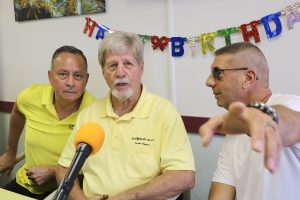 Peter Swartz, center, owner, manager, and founder of Sun Radio 96.3 FM and Internet live at the mic for the fifth birthday bash of the SCC radio station, along with Tex Perez, left, and Joe Frisa.
STEPHEN FLANAGAN JACKSON PHOTOS

Sun Radio WSCQ 96.3 FM, the voice of Sun City Center, celebrated its fifth anniversary on the air in June. This much-acclaimed and much-appreciated service to the residents and businesses of the Sun City Center area is the brainchild of Peter Swartz, owner and general manager, who almost single-handedly put the station on the air back in 2014 and now guides an exceptional, mostly-volunteer staff and excellent programming or content, which provides information, education and entertainment as a non-profit corporation with underwriting and advertising support by local businesses.

Sun Radio is, undoubtedly, a labor of love and a team effort. However, Swartz was, and is, the driving force behind the radio station’s 24/7 importance and commitment to the community and its residents. You would not realize it by listening to him, but Swartz is nearly blind. Despite his poor sight, Swartz handles on-air and off-air duties with the aplomb of a professional — a radio man. Therefore, The Observer News went straight to the source, Peter Swartz, to tell the listening, or rather the reading public, how he came to establish WSCQ in Sun City Center.

Tell us a little bit about the background of Peter Swartz.

I was born and raised in Chicago. My mother and family originated in Florida, so it was a natural thing for me to one day move back to Florida, which I did in 1967. In Chicago, I was involved in electronics. I went to school for electronics for a number of years and graduated from a couple of different schools that had electronics, but I have always been interested in radio. I moved to Sarasota in 1967 and began to work for a TV repair shop, but I hated it. I did that for a number of years because I had to make a living. Then, I started my own remodeling/handyman-type business.

In 1981, I moved from Sarasota to Lake City, Fla., to become a gentleman farmer. I bought 20 acres and was going to live off the land. I quickly realized being a farmer was a difficult job to perform. In the meantime, I found the cheapest place to buy produce was Winn-Dixie. However, I did raise pigs, chickens, turkeys, goats, etc. I ended up actually having to travel back and forth to Sarasota to work for some old clients who needed some work completed. I would make trips back and forth to Sarasota about every two weeks, working for a couple of weeks and then traveling back home to Lake City. 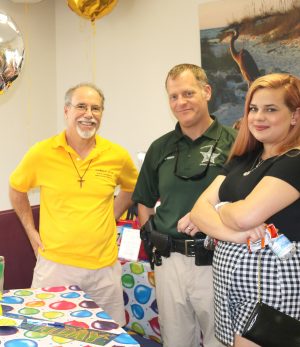 The way I got into broadcasting was by listening to various radio stations. Primarily, I listened to Christian radio, as I could pick it up around the Gainesville area and listen to it all the way to Sarasota. After my jobs were complete, I would listen to it on the way back home. Then, I realized there were no radio stations in the Lake City area for Christian broadcasting. A friend of mine a radio station in Sarasota, WKZM, which was a Christian station. I would sit with him during his broadcast and observed regularly. I thought to myself, “I am going to call my friend Lowell and ask him how to start a radio station.”

After some discussion with Lowell, he gave me some pointers. One thing led to another and the next thing you know I went on the air in the Lake City area in 1983 or 1984 with a radio station called WOLR, (Word of Life Radio).

I did not have any radio experience. Back in those days, you would play one record at a time, using a turntable. It is so different today. Back then I didn’t have the use of a computer. I had to learn everything by myself to run the radio station. Eventually, I became pretty successful at running the station.

Around 1989, I left Lake City and moved to the Homosassa, in Citrus County, and started another radio station. To make a long story short, I guess I have been in broadcasting for over 35 years, I have been responsible for putting eight radio stations on the air, including building towers, building the radio station, performing management duties, etc.

Finally, in 2004, my wife and I decided to relocate into a retirement community since my eyesight was deteriorating, and we were getting older. We looked into The Villages, but did not like what we saw. We eventually came here and fell in love with Sun City Center.

When we were looking around for a house to purchase in Sun City Center, I said to myself, “Hey, this would be a nice place for a small community radio station.” When we drove up to Sun Towers, as it was the tallest building in town, I saw a little tower on top of the roof. I thought to myself, “This would be a nice place to house the radio antenna.”

Little by little, I began to think about it, look at it and study the SCC area. I said, “If we move here, this is what I plan to do.” My wife and I purchased a home in Sun City Center two years before we actually moved in. In the meantime, I looked into how I would start a radio station here. First, I applied for a license; it takes about a year to receive approval. I started right after approval.

How long have you been in business in Hillsborough County?

We are happy to announce we celebrate our fifth year being on the air in June 2019 in Sun City Center. When we started the station here, I actually used my own utility room in my house as a studio and housed my transmitter next to the washer and dryer. Then, I erected a 50-foot push-up antenna on the back side of my house. Since we did not live in an HOA development, I was able to complete this task. Eventually, I moved over to the corporate building and rented a very small 8 by 8-foot space in the mechanical room for a year. We eventually moved to a bigger spot in the corporate building until we finally moved to our building.

Where are your business locations?

We are located in a little bungalow that we bought here in Sun City Center; it works very well for us. It is not very far from the CA Office.

What is the short-term and long-term outlook for the South Shore area?

When the station first went on the air here, I knew that Sun City Center was a unique community with all its clubs and organizations. One of the nice things about the area is that everybody has to be over the age of 55 to live here; they are mostly retirees that were in business for themselves or professional people. The one common theme we all share is the love of music styles from the ’50s, ’60s and ’70s era, so it was an easy decision to play the kind of music we grew up with.

Another thing I realized is, with all the clubs and groups, including the Emergency Squad, Security Patrol and Samaritan Services, they have activities that warrant new and updated information continuously over the radio. Of course, we talk about all the clubs on the air, including club information. We work closely with many volunteer groups to try and help them recruit volunteers, including talking about their programs and activities. We also have interviews with folks who live in the area here.

As far as the long-term goals, I would think we should continue to evolve with the community as the community changes and the age of the community begins to evolve into a different group of people. We have a turnover each year of about 10% of our residents as they either pass away or move to assisted living facilities or nursing homes. As we have this huge turnover of residents, the challenge is to keep everyone informed that there is a radio station for them to listen to in Sun City Center. When I first moved here, I think there were only about 100 or fewer clubs or organizations. Now, this number is getting close to about 140 or so. As people come into the community, they bring new ideas and things with them, so we need to keep up with that. I think of the radio station as an information center. We are a place where people can come and talk about their ideas or new things that they are doing and stuff, and this is an important part of the community. We do a lot of remote broadcasting where we take our DJs and equipment, and we go and do things outside, so we become very visual in the community. I think our long-term and short-term goals are probably just evolving as the community evolves into whatever direction the community goes.

Anything you would like to add either about your business or personal/family life?

We have a lot of listeners outside of Sun City Center who listen on the internet. That gets the word out about how great this community is. Just by listening to our radio station, they think, “Oh, this is a new place to come and live.” We have actually had people move here as a result of the radio station. They say, “Gee, I would like to come and visit.” We just talked to a gentleman who bought a house because he heard about SCC on a broadcast and thought it would be a nice place to explore. He visited, bought a house, and now is in the process of moving in. Radio station 96.3 FM and online is actually an ambassador for Sun City Center.,,

Keep your pets safe on the 4th