IN TIME FOR THANKSGIVING

New home going up in Riverview for Navy family after service in Afghanistan, Iraq

A retired Navy serviceman and his wife, a Navy reservist, will soon move with their four children from their cramped apartment in Riverview to a brand-new, mortgage-free home. The home, also located in Riverview, was started in June and is expected to be completed in time for occupancy at Thanksgiving. 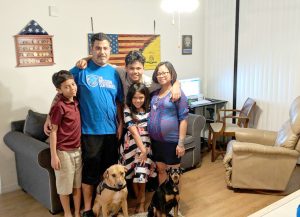 Retired U.S. Navy Petty Officer Second Class Jerry Whatts Jr. and his wife Jeaniel have been selected to receive a new home donated by PulteGroup through the Built To Honor program.

Retired U.S. Navy Petty Officer Second Class Jerry Whatts, Jr. and his wife, Jeaniel, have been selected to receive this new home that is being donated by PulteGroup, through the company’s Built to Honor program, in partnership with nonprofit Operation Homefront, which seeks to recognize returning injured military personnel. Following financial challenges post-service, the couple has been living in a small apartment with their four children. Through the program, the family will now have a four-bedroom home in Pulte’s Ventana community. “This is a truly a life-changing moment for our family, and we feel so incredibly blessed,” said Jerry Whatts.

Whatts and his wife have dreamed of owning a single-family home for a long time. After Whatts’ long recovery post-service, the family faced a mountain of financial challenges and found they could only afford a small apartment for their growing family, which includes four children: ages 10, 11 and 14, and a newborn baby. They had hoped for a home where they could have backyard barbecues, with an area for Jeaniel to practice her art therapy and room for their son Rahim to practice football. Both Jerry and Jeaniel Whatts have served on multiple deployments, including to Iraq and Afghanistan in support of Operation Iraqi Freedom and Operation Enduring Freedom. It was a deployment that brought the two together when both were at sea aboard the USS Nimitz.

“It is a privilege for Pulte employees, along with our trade partners and suppliers, to be able to give back to our nation’s veterans in a meaningful way,” said Sean Strickler, president of the West Florida division. “Jerry and Jeaniel Whatts and their family are so deserving of this new home. We look forward to working with all of them as we build this home to meet their needs and help them begin to create wonderful new memories in this next chapter of their lives.”

The Whatts family was accepted into Operation Homefront’s Homes on the Homefront (HOTH) program, which provides veterans and their families the opportunity to move into a home and work directly with housing caseworkers and financial counselors to prepare for home ownership. The family will receive the deed to the home upon successful graduation from the program, within one to two years.

We are extremely grateful to PulteGroup and their Built to Honor program for supporting our veterans and military families with mortgage-free homes,” said Brig. Gen. (ret.) Robert Thomas, chief operating officer of Operation Homefront. “We are excited to provide the Whatts family a home that will create life-changing financial stability and relief from the burden of a decades-long mortgage. At Operation Homefront, we are changing lives by partnering with like-minded individuals, companies, and other organizations to accomplish our mission of building strong, stable, and secure military families so that they can thrive, not struggle to get by, in the communities they have worked so hard to protect.”

Founded in 2002, Operation Homefront, a national nonprofit organization, created the Homes on the Homefront program, with the assistance of corporate partners, to provide our nation’s veterans and military families with the foundation for long-term stability and resiliency. More than 650 military families nationwide have entered into the HOTH program, and since 2012, over 550 of these families have graduated from the program and have been deeded their homes, mortgage-free, providing them with over $80 million dollars in home equity.

PulteGroup’s Built to Honor program was launched in 2013 to recognize and thank returning military personnel who have been injured during their term of service by providing mortgage-free homes to veterans and their families. Built to Honor works in partnership with nonprofit organizations to identify veteran candidates.

Since its inception, the Built to Honor program has delivered homes to 50 veterans and their families as they transition out of the military and into a new phase of their lives. According to Sean Strickler, providing a home is the best way for PulteGroup, as a top homebuilder, to give back to the nation’s service members.