When students return to East Bay High School in August, they will notice a change at the top. The principal since 2012 has resigned, and a new principal has been appointed by the Hillsborough County School Board. Passing the torch of leadership is Maria Gsell. Amy Stevens-Cox, who has been handling administrative duties at East Bay since 2013, is Gsell’s protégé and successor. 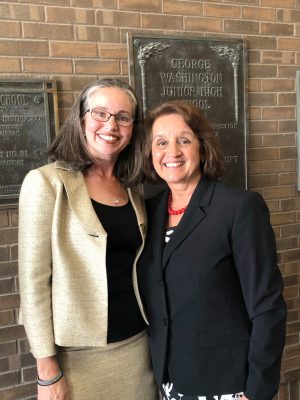 Amy Stevens-Cox, left, is the new principal at East Bay High School. She will be replacing Maria Gsell, right, who has been leading the school since 2012.

Established in 1957, East Bay is the oldest existing high school in the South Shore. Before the opening of East Bay High, the youth of South Shore, grades 1 through 12, attended Wimauma School. When East Bay High first opened in 1957, it served grades 7 through 12 in what is now Eisenhower Middle School. The present East Bay High building was constructed in 1972 and originally housed grades 10 through 12. In 1974, the ninth graders were included. East Bay is located at 7710 Old Big Bend Road, technically in Gibsonton, in an area close to Apollo Beach and Riverview. Prior to the opening of Lennard High School in 2006, East Bay also served students residing in the Ruskin, Wimauma and Sun City Center areas. The original building was converted to Eisenhower Middle School in 1972 when the current high school campus was built next door. East Bay High served approximately 2,284 students last year in grades 9 through 12.

The new principal, Amy Stevens-Cox, moved to the South Shore area from Miami-Dade County Public Schools in 2013 after serving as an assistant principal at Miami Edison Senior High. She joined East Bay High School and moved from an administrative resource teacher, to assistant principal, to assistant principal for curriculum in 2014. During her time as APC at East Bay Senior High School, the graduation rate has risen 16 points (from 73.5 to 89.3) and the school has experienced a 40 point gain on the state report card, which measures literacy gains, math gains and proficiency in those subjects among other things.

Stevens- Cox previously served as the academic director at the Homestead Job Corps Center near Miami, serving at-risk youth. She grew up in Hialeah, Florida, where she attended Hialeah High School. After graduating, she obtained a bachelor’s degree in English and a Master’s degree in educational leadership from the University of Florida. Her mother is Cuban, and she is fluent in Spanish. Stevens-Cox is married to MSgt. Horace Cox III, a recruiter for the U.S. Air Force Reserve. They have two daughters: Jamila, 15, and Julissa, 12.

Already in place and preparing this summer for her new job and for the students, Stevens-Cox said, “East Bay is a hidden gem in the county. Our faculty and staff are dedicated to student success, and our commitment to students is unmatched. I am honored to be leading the students and faculty and use the core beliefs of student advocacy and passion to guide my steps each day. I have learned so much from Mrs. Gsell. I feel privileged to have been entrusted with the school that she loved so much and will honor its traditions.”

As for Gsell, she has been principal at East Bay since being appointed in January, 2012. Gsell graduated from Dover AFB High School in 1972 and was not interested in furthering her education. “I joined the work force, married and had three children. As a stay-at-home mother, I was involved in PTA at my children’s schools. I accepted a position at Clair-Mel Elementary as a clerk-typist in 1986,” she recollects. “In 1988 I was hired as the principal’s secretary at H.B. Plant High School in Tampa. With tremendous encouragement from my late husband, Gary Gsell, and my principal, Dr. James Hamilton, I pursued my bachelor’s degree in English Education and became an English teacher at Plant in January 2000. Again, with Gary’s support, I decided to pursue my Master’s in Educational Leadership, graduating in May, 2006. Lennard High School opened that year, and I was fortunate to be named assistant principal for student affairs and eventually assistant principal for curriculum at Lennard.”

Education became important to Gsell as she observed her own children going through the public school system. “I listened to them as they spoke of their teachers and the lessons they were learning. I spoke to teachers daily in my role as a support person and decided I wanted to do more for students. I was not, like my daughters, a little girl who played school and knew I wanted to teach. It was an evolution for me. I did not set my sights on being a principal, but rather tried to do my best for students in each of my roles and took a natural progression to administration,” she said of her development as an educator.

Gsell observed that “we all know the challenges of being an educator have changed over the past 33 years. Society has changed, so why wouldn’t our microcosm be impacted? But, I believe that if we put every student first and do every day what is best for kids, we will not fail. If we come to our jobs every day with a servant’s heart, striving to do our best for every member of our campus, they will succeed,” she said.

As for life post-principal after departing East Bay, Gsell adds, “I plan to continue to be a life-long learner through continuing education at USF, travel with my husband Ted Murray, and serve in some capacity at the schools of my grandchildren.”

You can be an associate member