Palmetto Historical Park visitors take a step back in time

Palmetto Historical Park visitors take a step back in time 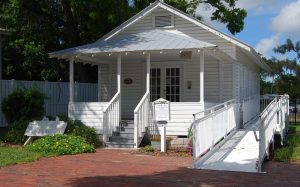 The one-room schoolhouse at the Palmetto Historical Park was built in the 1920s and used as Palmetto’s first kindergarten.

After a month of cleaning, sorting, arranging, and repairing, the staff and volunteers at the Palmetto Historical Park are ready to showcase once again this local gem of history and preservation to the public.Visitors to the park at 510 10th Ave. W will step back in time as they explore a tiny village of historical buildings from Palmetto’s past.

An 1880s post office, one-room schoolhouse, and a turn-of-the century cottage are sited around a brick-paver circle with a landscaped island. The back of the Carnegie Library, built in 1914, sits just off the circle, with the Military Museum and chapel across the way. The Manatee County Agricultural Museum is just to the right of the circle.

“I’ve always been interested in history – I took several history courses in college,” said Amanda Polson, supervisor of the park. “And working here made me realize the importance of preservation.”

To keep the history of these buildings alive, Polson and Tori Chasey, the park curator, use the stories of residents who made an impact on Palmetto society. During July and August, the Palmetto Historical Park will offer interactive, curator-led tours at 2 p.m., Tuesdays and Wednesdays. These tours, where detailed history and stories of Palmetto’s past will be told, will be custom tailored to the interests of the visitors. Hands-on activities for children will be provided, giving them a chance to dress up in turn-of-the-century clothes and play with vintage toys. 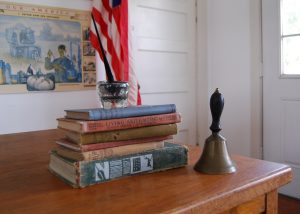 The teacher would use a hand bell, displayed on the teacher’s desk in the schoolhouse at the Palmetto Historical Park, to summon children to class.

To enhance the visitor’s experience, the historical park is in need of an fashioned butter churn and an ice cream churn. “They would be part of the park’s “hands on” collection and would be used during our field trips to demonstrate how these objects worked,” Chasey said. “Even a realistic re-creation would be helpful to give kids an idea of how they were used in the past.”

The park was closed to visitors during the month of June so Polson and Chasey, with the help of volunteers, could complete projects that had been put on hold. “We close for a month each year because it is the only time we can really get big projects done,” said Chasey, who has worked at the Palmetto Historical Park for six years.

“Some of the projects this year included new insulation in the Military Museum, which required extensive prep work to protect the collection of military artifacts, as well as cleaning up after the work was completed; window and plaster repair in the schoolhouse and then a fresh coat of paint; and an organizational overhaul of the schoolhouse closet to relocate and catalog objects and archives now that we’ve made space for them to be better cared for in the Carnegie Library,” she said. 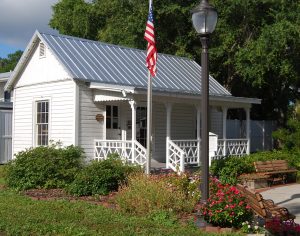 The Heritage Station Post Office was to be demolished before it became the first building moved to the Palmetto Historical Park.

The park opened in 1982 when Palmetto’s first freestanding post office was moved to the site. Jo Harrison and a group of civic-minded citizens heard the former post office, which had been built in the 1880s or early 1890s, was to be demolished.

They organized as the Palmetto Historical Commission to save the historical building and arranged to have it moved to city property at 10th Avenue and Sixth Street West, behind the historic Carnegie Library.

Named Heritage Station, the post office was dedicated on March 24, 1983, and guests to the event could have a specially designed cancellation postmark affixed to a piece of mail. To commemorate that event, every year a local artist designs a new postmark for the Palmetto Heritage Days at the Palmetto Historical Park.

The Heritage Station was the first freestanding post office in Palmetto because before then, the post office was in a general store. “The very first postmaster had a general store, and they had a window in the store,” Chasey said, “but when Mary Nettles was the postmaster, people would show up on her doorstep for their mail and that got old. Mary Nettles was Palmetto’s second and fourth postmaster, serving from 1880-1889 and again from 1893-1897. 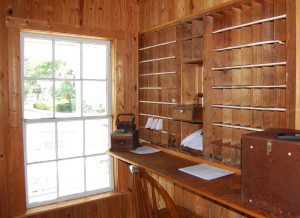 The oak postal boxes and clerk window are the centerpiece of the restored interior of the Heritage Station Post Office at Palmetto Historical Park.

“She was the one who had (the officials) build this post office,” said Chasey. “This building was kind of connected to her house and made like a T so that she could kind of run back and forth and take care of everything,” she said. The building was located just east of 10th Avenue West on Riverside Drive.

Richard Hebble, a regional postmaster and descendant of Mary Nettles, and other citizens provided period items and furniture for Heritage Station. A distinctive piece that Judy and Belmont Whittle donated for the post office is the 1880s oak postal window and boxes from an 1880s post office in North Carolina. The Whittles were owners of Whittle Furniture on Eighth Avenue West, a longtime business in Palmetto.

The second building to be added to the historical park was the schoolhouse, which sits next to the post office. Built in the 1920s, it was located on the former Palmetto Elementary School property on Seventh Street West from 1936, where it served for many years as Palmetto’s first public kindergarten. 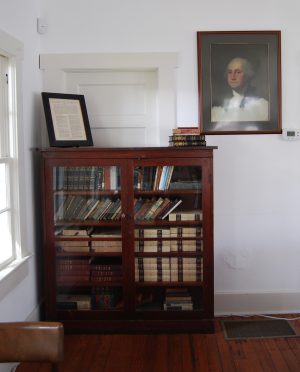 School text books from the turn-of-the-century are kept in a glass-doored bookcase at the front of the one-room schoolhouse at the Palmetto Historical Park.

After being moved to the park, the building was restored as a one-room schoolhouse with rows of double seat desks, a chalk board and teacher’s desk up front, book cases and cabinets, and slate tablets for the students to do their sums. On the lawn outside is a marble plaque honoring the memory of longtime Manatee County educator Frances “Frankie” Howze. Originally, the plaque was on an elementary school built in 1927 and named after Howze, who served as principal of that school.

Born in 1868 in Chicago, Howze, whose maiden name was McKay, came to Florida in 1888. After graduating from the Cook County Normal School at the age of 18, her doctor recommended a warmer climate to help her with her asthma.

“She had an aunt who lived in Polk County, so she came down and taught there for one year,” Chasey said, “and then Palmetto officials stole her.” Records indicate that Howze had a reputation for innovative teaching methods, and she was offered a $20-a-month raise to come to Palmetto. She taught in a one-room schoolhouse similar to the one restored at the historical park.

Within a year of coming to Palmetto, she married a widower with three children, Civil War veteran Capt. James Howze. Capt. Howze’s first wife, Mary, was the first victim of the yellow fever that had spread through the area in 1888. The captain and Frankie Howze also had four children together. 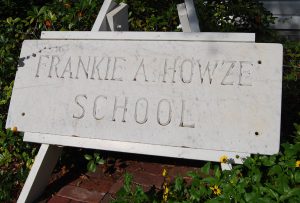 A marble plaque, outside the schoolhouse at the Palmetto Historical Park, came from an elementary school where longtime educator Frankie Howze was principal.

Frankie Howze became a pillar in the community, organizing civic groups and expanding educational opportunities for the children. “She was a teacher and the librarian in the Carnegie Library,” said Polson, who has been with the historical park for 18 years and has served as supervisor for the last eight. “She would close the school in the afternoon and then walk over to the library.”

Howze, who taught for 67 years, believed in educating the whole child and promoted physical education during the school day. “She was the teacher, the principal, the librarian, and she was our town’s first football coach,” Chasey said. “Football was a brand-new game and all the boys wanted to learn how to play. Mrs. Howze, being the librarian, ordered a book on football and taught all the kids in town,” she said. “Physical education was important to her at a time when PE wasn’t popular.”

For more information about the Palmetto Historical Park call 941-723-4991 or visit its website at www.PalmettoHistoricalPark.com.