TAMPA — As her mother, Ashley, looked on with a smile, Marley Valarezo, 8, carefully placed her foot over a photo of the footprint left on the moon nearly 50 years ago. 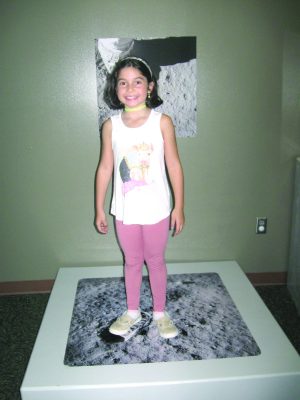 Marley Valarezo, 8, stands over a photo of the footprint left on the moon nearly 50 years ago.
VINCENT F. SAFUTO PHOTOS

Marley and her sister Maya, 10, were at the Museum of Science and Industry on June 20 to explore the “One Small Step” exhibit that staff members of the museum have set up to mark the 50th anniversary of the Apollo 11 moon landing.

The exhibit features a collection of Apollo memorabilia, including a working replica of the Apollo Guidance Computer, a space pen used to save the Apollo 11 mission from disaster, and a full-scale diorama of a 1969 living room where families came together to watch the historic event.

Visitors pass through a corridor that begins with a video featuring excerpts of President John F. Kennedy’s famous “We choose to go to the moon speech,” delivered in September 1962 at Rice University in Houston, and then pass panels detailing key dates in the history of Apollo 11.

Jeannette Ethier, a marketing and sales specialist for MOSI, said the purpose of the exhibit is to explain to those who were born after the Apollo 11 mission “what happened, when it happened, how it happened. It’s a fun story to tell the kids.”

With rock and roll hits from 1969 playing in the background, and other aspects of late 1960s culture on some of the walls, Ethier said another goal is to show that – unlike in the late 1960s, when many of the people working on the space program were white males – “We need to reach out to everyone. Diversity is important.” 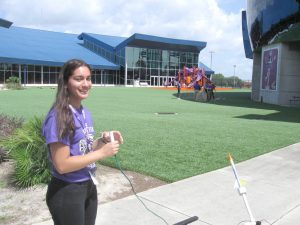 On the other side of the panels are explanations of the technology used to get to the moon. Ethier said she’s learned quite a bit from the displays, and pointed out the museum’s own moon rock, as well as newspapers and magazines from the time.

That technology of 1969 might seem crude by today’s standards, but some of it’s familiar. The television set from 1969 in the corner of the living room pulled in signals from the air through an antenna, not cable TV, and picture tubes have been replaced by flat-screens, but people watched programs, changed the channels and argued over the volume just as they do today.

The Apollo Guidance Computer was custom-built for the moon program. Each unit was about the size of a suitcase and weighed about 70 pounds at a time when computers weighed a lot more and were the size of refrigerators. Input was through DSKY (Display-Keyboard) units in the Command Module and Lunar Module, and the displays were just numbers, but with the help of Mission Control in Houston, that crude computer had what was needed to get spacecraft to the moon and back. 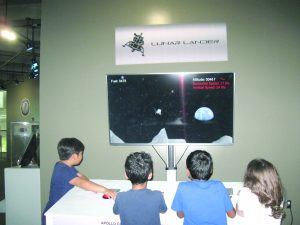 A group of children play the lunar lander game at the exhibit.

More than 530 million people around the world watched Neil Armstrong and Buzz Aldrin walk on the moon, and nearly 400,000 people had worked on the program that got them there.

While some visitors tried a lunar landing simulator programmed by museum staffer Wyitt Carlile, eager children, guided by high school-age volunteers, made their own paper rockets and then went outside to launch the rockets, with varying degrees of success.

Alex Masias, 16, of Brandon is studying architecture at Tampa Bay Technical High School. He’s enjoying working at the MOSI. “It’s really good,” Alex said. “I work with people my age. It’s science and engineering around here. We’ve gone so much farther in my time. We’re trying to go to Mars and further out.”

He’s impressed by the Apollo 11 exhibit and the way it’s helping kids learn about the moon and the missions. He said it would have been cool to work on the Apollo program, but he’d rather stay on Earth because he’s worried about an accident. 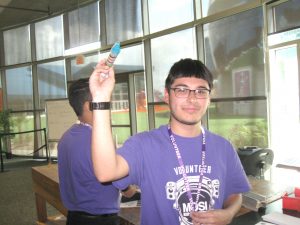 Alex Masias shows off a rocket that he was about to launch.

“I think once you’re up there, I think it’d be great,” he said. “You’d be able to see Earth and the planets. It’d be out of this world.”

Andrea Gutierrez is a 15-year-old volunteer who aspires to be either a journalist or a paleontologist. Although she said she’s more interested in reading about the history of science and scientific discoveries, she enjoyed watching the rockets being launched. “It’s fun involving yourself in your community,” she said, as she watched the rockets going up and coming back down. “It’s fun with the kids. It’s a fun experience. I think everybody should try it.”

MOSI’s Ethier said the following special events will be taking place in July to commemorate the flight of Apollo 11:

On Tuesday, July 16, MOSI will take part in the Global Rocket Launch, an international event celebrating the 50th anniversary of the launch of Apollo 11. Guests are invited to take part in launching high-pressure rockets at MOSI from 10 a.m. to 4:30 p.m. 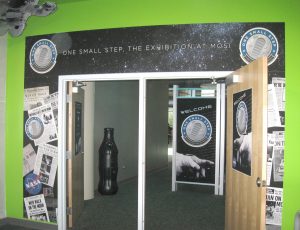 The entrance to the exhibit features newspapers with headlines from the era.

At 1 p.m. on Friday, July 19, MOSI will broadcast NASA’s “Giant Leaps: Past and Future — Celebrating Apollo 50th as We Go Forward to the Moon,” with NASA experts and learning experiences from NASA sites. In addition to the live broadcast, MOSI will engage guests with hands-on space science and engineering activities and with shows in the One Small Step exhibition.

On Saturday, July 20, MOSI will celebrate the 50th anniversary of humankind’s first steps on the Moon with STEAM activities from 10 a.m. to 5 p.m. MOSI will also re-broadcast the original Moon landing.

What: “One Small Step,” a celebration of the 50th anniversary of the Apollo 11 landing on the moon

When: Now through early September