A young man now living in Apollo Beach with his parents usually hits what he aims for! For 18-year-old shotgun sharpshooter Jack Brosseau, that’s all good. 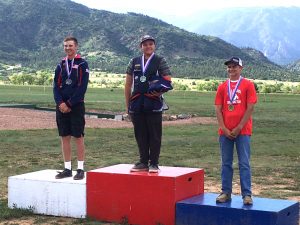 Jack Brosseau of Apollo Beach stands on the center platform, adorned by a gold medal he earned at the National Junior Olympics for Bunker Trap shooting in Colorado. He now has his eye on making the U.S. Olympic team in 2020.

No sooner had Brosseau graduated in the top 20 of his senior class from Durant High School — he previously lived near Plant City with his parents, Karen and Alan Brosseau — than he headed out to the Rocky Mountains for the Junior Olympic Trap Championships.

After returning home last week with the gold medal around his neck for his first place at the 2019 National Junior Olympics for Bunker Trap, Brosseau now has his sights set on a berth on the 2020 Olympics team as a trap shooter. Also in his crosshairs is an engineering degree from the University of Florida,where he starts his studies in July. In Florida, there are only two official Olympic trap shooting ranges. One is in Land ‘O’ Lakes. The other is in Gainesville, thus influencing Brosseau to choose UF so he can continue to practice shooting the clay discs with a keen eye on the upcoming Olympics team where there is no age limit on trap shooting.

Brosseau’s gold medal winning trek to Colorado began in mid-June at the International Shooting Park in Colorado Springs for 186 talented junior participants who fired shotguns at as many as 475 competition targets over a two-week stretch. 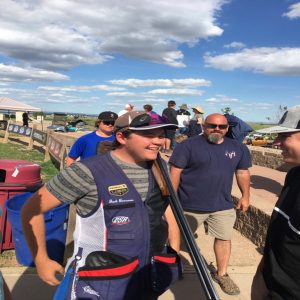 Brosseau was competing at the two-day National Junior Olympic Shooting Championships (NJOSC) after a five-day National Championship had left competitors physically and mentally fatigued. Several of the male and female athletes from all over the U.S. with aspirations similar to Brosseau’s had pushed through marathon competition to earn medals.

Brosseau made sure people were talking about him at the conclusion of the festivities with the spectacular Rockies standing in the background. He saved his best for last, and a perfect final 10 targets was enough to earn him his first international trap title.

The win highlights a cooperative program between the Scholastic Clay Target Program (SCTP) and USA Shooting that is helping infuse international bunker with top shotgun talent. Brosseau is a product of the SCTP system and showed that he has the moxie to compete at the highest levels of shotgun. A score of 48 in the finals is a world record, and in variable light and wind conditions with very little finals experience, Brosseau was breaking 46, which is nothing but world class. National Champion Alex Rennert and the Junior National Champion Reynolds both had shot 47 earlier in the week to win their finals at Nationals. Two of Brosseau’s misses came on targets 38 and 39, and then he’d never miss again. 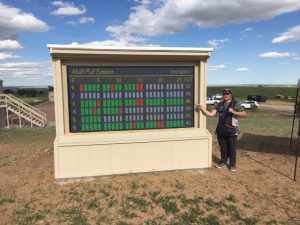 Trying to match Brosseau was Grayson Davey of Alaska, but he’d finish three short with a strong 43. Davey was the only men’s competitor to earn two podium spots, cashing in bronze for silver earlier. One of the two leading qualifiers with a 118, 15-year-old Emilio Carvalho of Tranquility, Calif., would place third to earn himself a spot on the Junior Olympic Squad.