Helping ease the transitions for military families moving to Florida 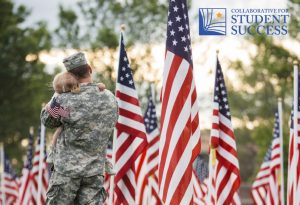 Thousands of military service members will soon be receiving orders to pack up their families and move to another region of the country, with many of those coming into and going out of Florida.

The so-called permanent change of station orders peak around now through late spring. And for families with school-age children, the orders often ignite a rash of concerns about whether public schools serving the next installation will provide a high-quality education and can effectively transition these outsiders into an entirely new academic setting.

U.S. service members who are moving to a military facility in Florida have two powerful resources to help them navigate the shoals of transitioning to schools in the state.

One resource provides a macro picture of how select states are addressing education quality issues in their public schools, while the other provides parents with insights into what specific types of programs work best for military-connected students as they transition into a new school district. Taken together, the two resources can help quickly educate parents moving into the Sunshine State.

Florida has one of the largest concentrations of active duty military, with approximately 59,087 personnel stationed in the state, according to the military’s latest demographic data from 2017. Florida also plays host to many military dependents – 80,611 in all — many of whom are school age children.

The first resource is an independent analysis called Promise to Practice (checkstateplans.org/promise-to-practice) that assesses how states are addressing underperforming schools. Given that most military-connected students attend public schools, this guide is useful for rapidly getting service members up to speed on how serious any given state is about fixing schools that might be ailing.

For example, a parent moving to one of the several military installations in Florida learns that the report gave the state a “weak” rating in six of eight categories that were studied. The panel of national experts who compiled the report concluded that the state is taking too limited a role in leading or supporting school improvement efforts. That’s helpful information for a family plotting a child’s education for the next couple of years until the next move out of state.

The other guide, by the Lexington Institute in conjunction with the Collaborative for Student Success (forstudentsuccess.org), identifies the specific types of programs that have a proven track record of helping address the needs of military-connected kids. As parents assess local schools, they should factor in the findings, and press schools and districts to adopt these practices with military students in mind.

One of the best practices cited in the report — that schools should have an efficient intake and identification system for identifying military children — seems obvious but can be a major challenge. It is essential that schools get this right and that parents identify their child as military-connected. The key to nurturing the bond between student and classroom is to identify the military kids early in the school year, so that educators can provide personalized support, easing their transitions academically.

As a teacher at Fort Bragg, NC, I work to ensure that every student in the class knows everyone else’s name. It seems like a small thing, but it has outsized impact. As Dale Carnegie said, “A person’s name is to that person the sweetest and most important sound in any language.” It is perhaps even more so for young minds. I have witnessed a new student’s face light up when they hear another student speak with them using their name. They instantly feel they belong. They relax. They gain confidence. All of which provides the strong foundation for academic success.

Relocating to Florida doesn’t need to be so fraught for military parents if they make use of powerful resources and work with educators to ease the anxiety of transitions.

A middle school teacher of military children with the Department of Defense Education Activity, Kiera Tyler is also an Army spouse and a member of the national advocacy group Military Families for High Standards.

Membership has its privileges