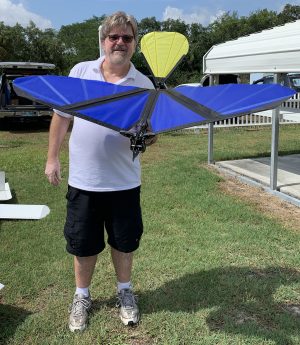 As a young boy, Keith Krug always was involved with building and putting things together, and one of the things he enjoyed building was model airplanes.

Now Krug, 58, has taken that experience and used it to fuel his hobby, flying radio controlled model airplanes. “I was building model airplanes back then but never flew them,” he said. “I always had intentions to fly them though, but I didn’t have the time or the funds to fly back then,” Krug added.

On any given Sunday, you will find the Bradenton resident at the Manatee County Radio Controllers club’s Carl Wegner Field, named after a longtime member who donated the funds to upgrade the runways. The field, with its 600-foot smooth grass runway for radio-controlled takeoffs and a newly upgraded control-line aircraft circle, has facilities for radio-controlled airplanes, radio controlled multi-rotor aircraft, such as drones, and control line airplane hobbyists.

Generally, hobbyists fly radio controlled, or RC, model airplanes, some with the design of full-sized aircraft, such as the PT-22, a military trainer aircraft used during World War II. But some “pilots” are flying ornithopters, an aircraft that gets off the ground and maintains flight by flapping its wings. And in more recent years, drones, or multi-rotor aircraft, have become popular. There is also control-line flying, where the pilot controls the aircraft’s flight via two lines, which run from the hand-controller and are attached to the plane. The Manatee County Radio Controllers airfield accommodates all of these aircraft. 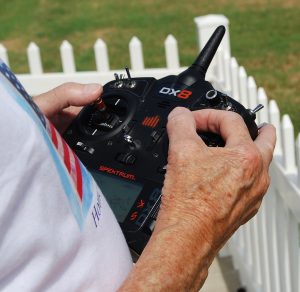 A radio-controlled aircraft’s flight is controlled with a hand-held radio transmitter, which sends signals to the aircraft for speed, mechanical, and maneuvering controls.

Regardless of the type of aircraft, most fly with small engines, which are either gas or battery powered. The RC aircraft’s flight is controlled with a hand-held radio transmitter, which sends signals to the aircraft for speed, mechanical, and maneuvering controls.

“There have been a lot of new technologies over the years,” said Manatee RC member, Jim Holloman. “Now there’s no (radio frequency) interference from another pilot’s controller.”

Holloman joined the club in 1997 after moving to Manatee County from New York. He got into RC modeling when his wife bought a kit for him one Christmas. “There was a club in New York (where he lived at the time), and I went out and got the bug,” Holloman said.

The Manatee County club was started around 1979 and, at first, used a field on Rye Road in Parrish, before moving to its present home, formerly the site of a Palmetto city landfill. The 5.6-acre airfield is located at 7315 71st Ave. E., off 69th Street East, next door to the Virgil Mills Elementary School and west of downtown Parrish. 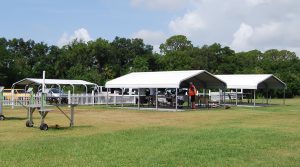 There are seven shelters with electricity for charging equipment at the Manatee County Radio Controllers’ Carl Wegner Field.

Moving to this field in 2004, the club has improved the facilities over the years with seven shelters with electricity for charging equipment, a concession stand, called The Pilot’s Den, and a double-wide clubhouse with indoor restrooms. “We are one of only two facilities in Florida that has indoor restrooms,” Krug said.

Krug moved to Manatee County with his wife Lisa in 2006 for a job as a roof installation designer with Gulf Eagle Supply. He joined Manatee RC in 2007. “My wife saw an article (about the club) in the paper, and said ‘Let’s go and find out about it.’ Then I joined, bought a trainer aircraft, and started flying.”

Flying is in his blood. “I have always loved airplanes and flying,” Krug said. His father was in the Army Air Corp during World War II, and his brother is a pilot. “I would go up with him (his brother) sometimes. I have about 60-70 hours in pilot flying myself,” he said, but he never completed the requirements for a license. 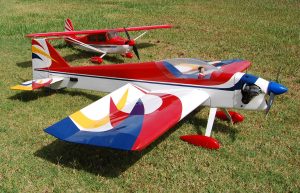 He has been president of the Manatee RC for six years.“As president I’m the face of the club,” Krug said. “I manage basically when we have events and help cook at our concession stand.” As club president he also runs the regular membership and executive board meetings. There are 103 members and meetings are the last Saturday of every month. New members pay a $100 initial fee and annual dues are $100. “We let people come out and try it to see if it’s something they’d like before they go out and spend money,” Krug said.

New pilots are put on a buddy box, which is two transmitter controllers on the same frequency with an instructor and the new pilot controlling the same plane. “These aren’t toys,” Krug said. “We have rules that have to be followed for safety.”

The major event of the year is the Dick Coles Memorial Fly-In, held the second weekend of March. Dick Coles was one of the original founders of the club. Krug said the club has held this event for about 30 years. 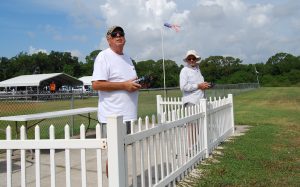 “It’s a time for everyone to enjoy themselves,” Krug said. “We get a lot of spectators who come out just to watch.”

And in February the club hosted a regional event, the West Florida All Electric Fly-In, where RC clubs came together to compete. “We had around 40 pilots,” Krug said, “and quite a few spectators. “This was the first of an event we’re planning to hold annually,” he said. “We had fliers from out-of-state, some from North Carolina and Georgia.”

ManateeRC is a chapter member of the Academy of Model Aeronautics, or AMA, a national organization headquartered in Muncie, Ind., which was founded in 1936 and has 140,000 members in 2,400 chartered clubs. The AMA also hosts national and international competitions at its 1,100-acre International Aeromodeling Center in Muncie and sanctions 2,000-plus competitions annually throughout the country. According to the AMA website, the organization is “a world-class association of modelers, organized for the purpose of promotion, scientific/technical development, education, competition, advancement, and safeguarding of aeromodeling activities.” 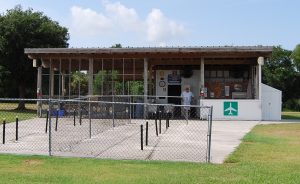 Since moving there in 2004, members of the Manatee County Radio Controllers have built the facilities, including the construction of a concession stand, called The Pilot’s Den, at the club’s Carl Wegner Field.

An interested hobbyist can get into RC model airplane flying for between $400-$500. “A lot of guys were pilots or flew in the military and wanted to build a model and fly,” Holloman said.

John Miller, who flies a model 540 Edge, said he enjoys the hobby, but there is always something new that he wants to add to his kit. “Like any hobby, it’s addictive,” Miller said. “You keep wanting to upgrade.”

For long-time member Dave Grenier, RC flying is relaxing. “People just like airplanes,” said Grenier, who joined Manatee RC in 1993. “And you get to walk away from every crash.”