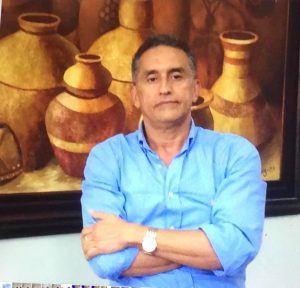 Jairo Ramirez Salcedo, artist and professor, exhibits some of his oil paintings, reflecting the history and ecology of the
“coffee zone” where he lives in Colombia, on Saturday, June 22, in Sun City Center at the North Clubhouse, 1900 Clubhouse Drive, Kings Point.

Want some of the best coffee in the world? Visit Quindio in Colombia in South America

Want to experience some of the most beautiful and mountainous landscape, rivers, tropical rainforests, lush flora and fauna in the world? Once again, schedule a trek to Quindio.

Want to experience the feel of Quindio and pre-hispanic Colombia? Go to the art exhibit this weekend at the North Clubhouse, 1900 Clubhouse Dr. in Kings Point, Sun City Center.

Quindio is one of the 32 states (known as departments) in Colombia. Quindio is home to 60 species of mammals and the habitat of 520 species of birds. You can eat a different fruit every day of the year. Quindio is also home to nearly 200 species of heliconia, or flowering, herbaceous plants, including the bird-of-paradise, lobsters-claws, toucan beaks, and wild plantains.

Quindio is located in the area known as “zona cafetero,” the coffee region, which drives the economic and tourism engine of the area. Sitting smack dab in the middle of the triangulation of three main cities of Colombia: Bogota, Medellin and Cali, the area is also known as the Coffee Triangle, part of the Colombian Paisa region in a rural area of Colombia. The trip by car or bus is about 210 meandering-mountainous-miles from each: Bogota to the east, Medellin to the north and Cali to the south. An airplane trip would take you more quickly over the stupendous, undulating, rugged Andes Mountains. Armenia is the capital city of the state of Quindio, which ranges in altitude in the Andes from 16,896 feet to 3,609 feet. 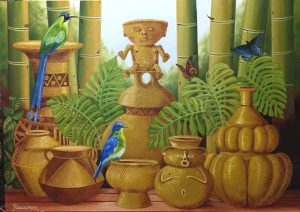 Colombian artist Jairo Ramirez Salcedo’s work features the ceramic and goldsmith work and the flora and fauna of the indigenous, or Indian, culture of Quindio in Colombia.

Quindio is also famous as the home of the pre-historic Quimbaya Indians, or indigenous people, noted for their gold mining and for their unique, exquisite, valuable handiwork in gold and copper. According to historians, the Quimbaya culture existed and thrived between 100 BC and 700 AD, but died out about 1000 AD, for unknown reasons, well before the arrival — some would say the invasion — of Europeans from Spain in the early 16th century. Today, only about 2,000 indigenous people directly related to the Quimbaya remain in the region.

To experience some of the glory, beauty, and culture of the era, you can visit the exhibit, featuring Columbian artist, Jairo Ramirez Salcedo, in Sun City Center on June 22 from 4 to 8 p.m. The Ramirez exhibition includes some 14 paintings that reflect the Colombian landscape and still life reflective of Quindio.

Artist Ramirez’ work has been internationally recognized at exhibitions in Canada, Brazil, Panama, Chile, Switzerland, and, now, the U.S. His paintings relate to the different indigenous cultures who lived in South America in the time prior to the arrival of the Europeans. Ramirez’ lucid, colorful, dynamic oil paintings focus on goldsmith and ceramics of the Quimbaya culture. The exhibit will also feature the work of other Colombia artists.

Ramirez refers to his artistic renderings as “a pictorial exhibition of Ancestral America, (works) which are associated with the historical and cultural traditions, identities, and archaeological findings of the coffee cultural landscape of Colombia and the entire continent of South America, including the indigenous Moche of Peru.” Ramirez adds: “My purpose through my art is to portray, preserve, and disseminate these traditions to strengthen and promote cultural dialogue.”

Ramirez describes himself as “an artist by birth and a teacher by vocation.” He has a degree in graphic design and educational technology from the University of Quindio. He currently works, when not painting, as a professor at the National Institute of Diversified Media Education in Colombia. Ramirez says he teaches his students “the magic of art and the technical basics and complexity of drawing, so that, in a creative and simple way, through less conventional ways, they embrace their talent, develop self-realization, and rediscover the world in which they live.”