Out of mutual love for animals, son follows in dad’s footsteps 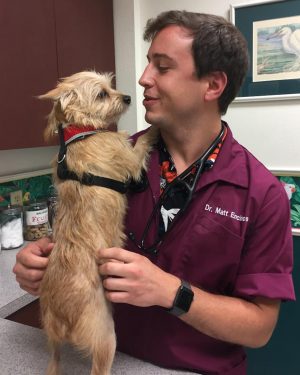 When Matt Encinosa graduated from Riverview High School in 2011, he went off to the University of South Florida intending to become a doctor.

“I’ve always loved kids; I want some of my own,” he said. “So I originally planned to pursue pediatrics.”

But those plans gradually changed when, as an undergraduate at USF, Matt started working almost full time at his father’s business, Boyette Animal Hospital.

“I didn’t cut him any slack,” said Bob Encinosa, a well-known and highly successful veterinarian in the South Shore area. “He started in the kennels and eventually became a veterinary technician.”

“I have always loved animals, and since my dad is a veterinarian, I was around them a lot,” Matt said. “But working here and actually being with them was different for me. Once I moved to the tech position, I was able to see how interesting and challenging veterinary medicine is.”

On May 6, Matt graduated from Auburn University College of Veterinary Medicine in Auburn, Ala., with a very proud father by his side. After approaching his dad about working with him, the 26-year-old, newly minted vet joined the staff at Boyette Animal Hospital.

“I considered working elsewhere, but I honestly didn’t feel I’d get the same level of experience and opportunity as I would here,” said Dr. Matt, on a brief break after recently treating an emergency patient. 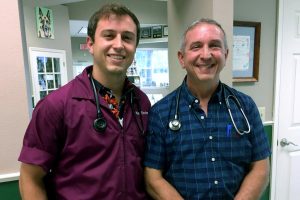 Matt Encinosa, 26, left, and his father, Bob, 57, now work side by side at Boyette Animal Hospital, a practice his dad has owned since 1990. The younger Encinosa joins a team of 78 people, including 11 other veterinarians.
LOIS KINDLE PHOTOS

“I wasn’t sure any of my kids would follow me into veterinary medicine,” he said. “It’s completely awesome.” (Sarah, 23, a registered nurse, is studying to become a nurse practitioner, and Ellie, 21, is a USF student majoring in computer sciences.)

Matt started his new job rotating with and shadowing each of the 11 veterinarians on the Boyette Animal Hospital staff. He began practicing June 3, and he already has his own workload.

“He’ll be honing his skills and acquiring new ones as he’s mentored and additionally trained,” Dr. Bob said. “He’ll be focusing for many years on being a veterinarian before learning the business.”

Matt’s loving every minute on the job. He’s already seeing patients on his own. “I thought at first it would be scary, but with the support of the other vets and the staff, it’s really been fun,” he said.

Some big shoes to fill 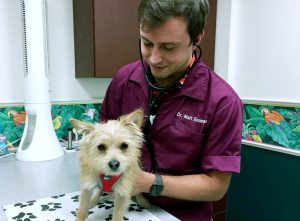 Dr. Matt, as he is now known, listens to puppy Spike’s heartbeat in an exam room at Boyette Animal Hospital in Riverview.

Dr. Bob, a 1987 graduate of the University of Florida, opened his practice in November 1990 in a 900-square-foot space in the shopping plaza next to Winn-Dixie. His mom was his first employee, and his wife Cheri helped with billing.

Today, his main practice at 10931 Boyette Road, Riverview, is almost 10 times that at 8,500 square feet, and he owns the 2,000-square foot Well Pet Center on the same site. He employs a team of 78 doctors, vet techs, support staff and receptionists. Cheri still takes care of the practice’s accounts payable and payroll.

“I’d be lucky if I can turn out to be as good a doctor and man as he is,” Dr. Matt said. “I’ve always looked up to him. I know I have some very big shoes to fill.” 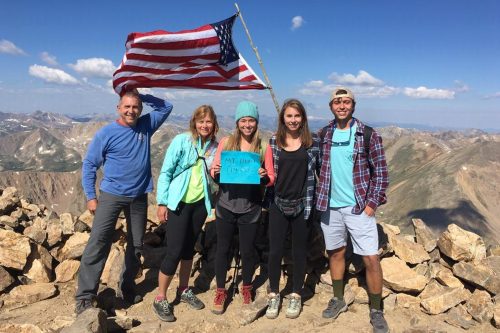 The Encinosa family paused last summer for a photo at the top of Mt. Elbert, the highest mountain peak in Colorado. From left are Dr. Bob, his wife, Cheri, daughter Sarah, daughter Ellie and son Matt, who is now a veterinarian practicing with his dad at Boyette Animal Hospital in Riverview.
ENCINOSA FAMILY PHOTO