Field Day for hams to strut their stuff 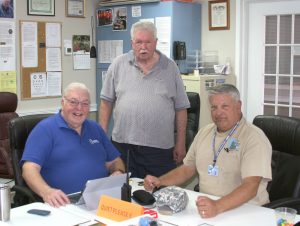 The hams will be on display in Sun City Center this weekend. These hams have nothing to do with bacon or pork chops or baby back ribs or any other variation of swine. Even though many millennials and post-millennials may not be familiar with this particular brand of hams, “radio hams” of this sort have been around since the late nineteenth century, predating commercial radio.

Commonly referred to as hams, these amateur radio operators make use of a radio frequency spectrum for non-commercial exchange of information, wireless experimentation, self-training, private recreation, radio sports, contesting and emergency communication. Although not quite as popular in the modern day age of high tech, ham radio is making somewhat of a comeback, at the same time remaining very popular with the older generation as a hobby and service, with its ability to bring people, electronics and communications together outside the digital, social media. People realize that ham radio is fun, social and educational, and it can be a lifeline during times of need. People with the skills and proper equipment can use ham radio to talk across town, to connect globally and to talk into space — without a cell phone or without the internet. 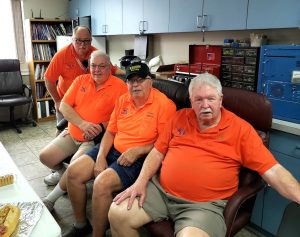 The term “ham” was first a pejorative term, used in professional wired telegraphy during the 19th century, to mock operators with poor Morse code sending skills, criticizing them as “ham-fisted.” This moniker — “ham” — continued to be used after the invention of radio and the proliferation of amateur experimentation with wireless telegraphy. Among land- and sea-based professional radio operators, “ham” amateurs were considered a nuisance. The use of “ham,” meaning “amateurish or unskilled,” survives today in other disciplines such as a “ham” actor or “ham” comedian.

The amateur radio community, subsequently, began to reclaim the word as a label of pride, and by the mid-twentieth century, “ham” had lost its negative meaning in the radio context. Although not an acronym, the term is often mistakenly written as “HAM” in capital letters. Ironically, the TV show “Last Man Standing” features a ham radio operator as its main character, “Mike Baxter,” as played by Tim Allen.

Sun City Center amateur radio operators, or “hams,” will participate in their annual FIELD DAY event June 22 and 23. Open to the public, the exhibition includes a contest or competition among hams. The Field Day begins at 2 p.m. on Saturday, shuts down about 11 p.m. that night and picks back up the next day, Sunday, from 8 a.m. until noon. Admission is free for the event at the SCC North Campus at 1009 N. Pebble Beach Blvd. in the ham radio club room at the maintenance building. Some ham operators will be set up outside, depending on the weather. 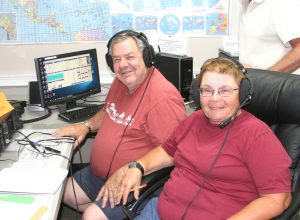 The Field Day, sponsored by ham radio’s national organization, the American Radio Relay League (ARRL), challenges each group to contact as many other stations as they can in a 24 hour period. The Field Day at SCC is also a good opportunity for members or newcomers to test their equipment and to practice their emergency communication skills, especially as hurricane season approaches.

According to one of the SCC organizers and hams, Bill Barron (W1WAB), the public is invited to stop by to see and hear the action. “Perhaps try your hand at making an on-air contact or sending out a Western Union-like Radiogram for delivery via the airwaves to distant family and friends,” said Barron.

The Sun City Center Ham Club, established in 1983, boasts 71 members and has a well-equipped operating station. The local station is capable of communicating with other stations around the U.S. and throughout the world. Hams communicate, using voice, radio-teletype, and modern digital-chat modes, as well as traditional Morse code. However, learning Morse code or the CW (continuous wave) signal is no longer a requirement to obtain a radio license and call sign. The club regularly conducts license classes and examinations for those interested in obtaining their call signs. The club can be contacted via its website sccarc.info or at 813-642-2071. The Sun City Center Amateur Radio Club meets the first Wednesday every month at 2 p.m. in the Florida Room at the Community Association.

Some general background provided by Barron:

• Amateur radio operators, the hams, are licensed by the FCC (Federal Communications Commission). There are over 750,000 hams in the U.S. with approximately 42,000 in Florida. Each licensee is assigned a unique “call sign.”

• Amateur radio operators train to provide vital communications during emergencies. Western Union may be gone, but Radiograms (like telegrams) are still sent around the world.

• The Sun City Center Ham Club was established in 1983 and has 71 members. Website: www.sccarc.info. The club room (or ham shack) is located in the north community association campus.

• SCC Ham Club members participate in many SCC events, like the holiday golf cart parade and FunFest, and are readily identifiable in their bright orange shirts or by the orange ‘emergency’ signs displayed in their home windows