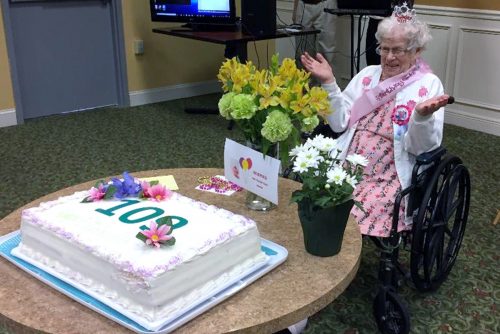 Florence “Miss Flo” is obviously delighted by all the hoopla at her surprise birthday party May 30. She wore her tiara and sash the entire day.
LOIS KINDLE PHOTO

Florence “Miss Flo” Ellenberger celebrated her 109th birthday at Sun Terrace May 30, surrounded by friends and two of her grandchildren. As she was wheeled into the main dining room for a surprise party, the birthday girl gasped with delight.

Flo quickly demonstrated her sense of humor and positive outlook, as she spoke to a roomful of celebrants. “I’m just a young chick,” she said, her face framed in a grin. “I plan on being around for a while.”

That’s nothing new to the folks who care for her. “She wheels into my office every day and says, ‘I’m still alive,’” said Kimberly Lehigh, executive director of Sun Terrace and Sun Towers. “She’s inspiring and such a delight.” 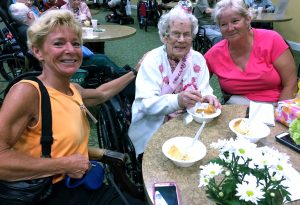 The centenarian has lived through much over her 109 years. Not many can say they were here during the sinking of the Titanic and the Lusitania, women’s suffrage, World Wars I and II, the Great Depression, the Civil Rights Movement, Vietnam War and man’s first walk on the moon. Just think of the changes she’s seen, for example, in the worlds of telecommunication, transportation and entertainment.

Although she doesn’t remember it all now, she describes what she does remember as “wonderful.” And that’s quite amazing, considering all she’s been through. Flo has survived three husbands, two sons, a daughter and two heart attacks.

“I admire her most for never giving up,” said her oldest grandchild, Gay Miller, of Vero Beach, 61. “Despite great losses, she has stayed positive and upbeat about her life and the world in general. She has such a good sense of humor.” 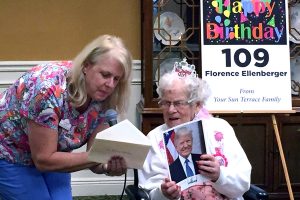 Heidi Tidd, director of environmental services, presents Miss Flo with a photo of President Trump and a card filled with good wishes from the him and the First Lady.

Highlights of Flo’s birthday celebration included the presentation of a card filled with good wishes from the White House, signed by President Donald Trump and First Lady Melania Trump; a photo of the President; the singing of “Happy Birthday,” “High Hopes” and other standards; and cake all around.

One 90-year-old resident took Flo’s hand, smiled sweetly and told her she was old enough to be her mother.

Flo gives all the credit to God for her longevity and has little patience for those who feel sorry for themselves.

“I have been blessed. I’ve had a wonderful life,” she said. “I thank the Lord every day when I say my prayers. He directed and I followed.” 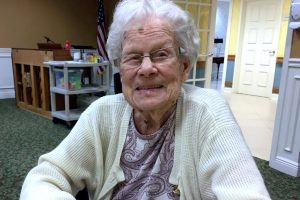 Florence “Miss Flo” Ellenberger was born May 30, 1910, in Rochester, N. Y. When she was 102, she still went to St. Andrew Presbyterian Church in heels and sang alto in its choir. Now 109, Flo is confined to a wheelchair, which she “drives” everywhere. 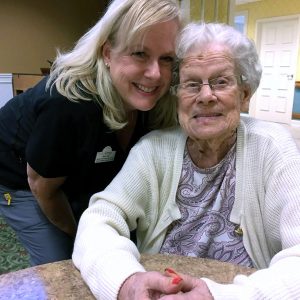 Heidi Tidd and “Miss Flo” pause for a photo during a pre-birthday interview at Sun Terrace. “I’m not that old, at least mentally,” Flo said. “I’ve had a wonderful life. I thank the Lord every day when I say my prayers. He directed and I followed.” 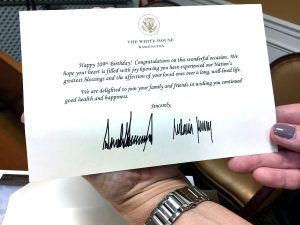 Shown here are the birthday wishes Miss Flo received from the White House. 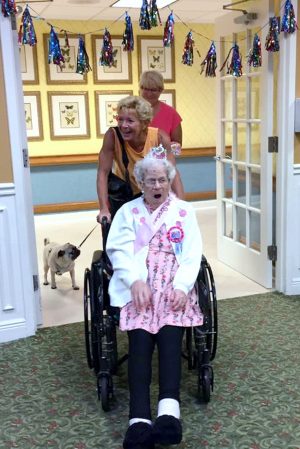 By the look on her face, Miss Flo is totally surprised by all the people who turned out to celebrate her recent 109th birthday. Having survived three husbands, she told her granddaughters she preferred to stay single, since all of the available men were too old.