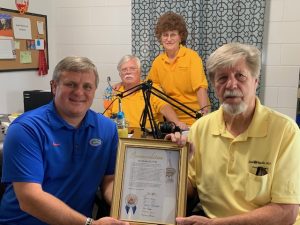 The voice of Sun City Center, Sun Radio WSCQ 96.3 FM, noted it fifth anniversary on the air earlier this month. Yes, it has been five years since Peter Swartz, engineer/broadcaster/general manager/owner, took the plunge and launched the radio station on the airwaves as one of the most-needed and most-valuable services for the South Shore area.

On the occasion of its fifth anniversary, Sun Radio WSCQ 96.3 FM received a commendation from Hillsborough County’s Board of County Commissioners last week. The commendation notes that the radio station has not only provided quality programming of popular music to the community but has served the residents of Sun City Center through its focus on community safety and education. Specifically, the commendation states that the station’s broadcasting of up-to-date public safety information and crime warnings from the sheriff’s office; public service announcements during hurricane season; and relevant programs on elder law, veterans’ benefits and organizations, healthcare, financial management for retirees and the weekly news readings for the visually impaired illustrate the radio station’s commitment and importance to the residents of the community.

Sun Radio 96.3 FM is staffed by a group of dedicated volunteers, under the leadership of veteran radio man Peter Swartz, the major-domo, chief cook, and bottle washer. WSCQ is a non-profit corporation that is funded by caring local businesses as program underwriters and sponsors.

Swartz said the public celebration of the radio station’s fifth birthday is set for Monday, June 24, from 11 a.m. until 2 pm at the SCC Security Patrol office, 1255 N. Pebble Beach Blvd.