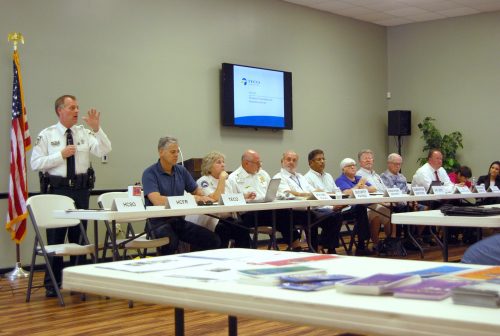 Representatives of nine county and local organizations recently gathered at the Sun City Center Area Chamber of Commerce to report on their disaster plans should Sun City Center be hit by a major hurricane. LOIS KINDLE PHOTO

Representatives of nine county and local organizations recently met with leaders of major community groups to inform them about their disaster plans should Sun City Center be hit by a major hurricane. And based on what was reported, residents should feel confident that the community is in good hands.

“The level of collaboration, communication and cooperation in pulling this meeting together was exceptional,” said Sun City Center Emergency Squad Chief Mike Bardell. “Credit goes to all of our community organizations involved in this planning effort, but, particularly, to the Security Patrol, Samaritan Services and South Bay Hospital. 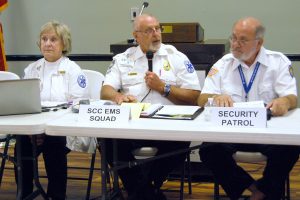 “Our local assisted living and skilled nursing facilities, as well as our radio clubs and the leadership for Vesta, Kings Point Federation and the Community Association have worked to identify their resources and needs and to plan and to communicate their plans to each other and to the planning group.

“And we also want to acknowledge our local media, SUN Radio, the Observer News and e-News, because without their support and involvement, the community would be uninformed.

“We want Sun City Center to be as prepared as possible. We want to reassure community residents that there is an army of people working behind the scenes to help ensure their safety,” Bardell added.

TECO, for example, reported it has spent $577 million to harden its system since 2006 and will spend another $175 million over the next three years.

South Bay Hospital stressed it will remain open but will lock down during a hit. Folks with critical needs must prepare well ahead of a hurricane, registering for a special needs shelter, if necessary, or ordering enough oxygen tanks or medications to get through the duration and aftermath of a storm.

Others talked about how our various volunteer organizations shut down in order to keep their volunteers safe when winds hit 35 mph but return to normal operation when the winds die down and the storm has passed.

Residents should make their plans now and be prepared with enough supplies, water and food to last at least seven days. Pets should be included in those plans. If the community takes a direct hit from a hurricane, people could be on their own without power for an extended period of time. 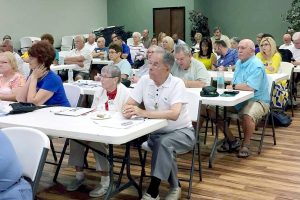 Hopefully, this area will be spared again this year. But residents can be assured that their community officials are ready to assist as soon as they are safely able to do so.

“The important thing is everyone’s communicating with each other for the first time,” said Hillsborough County Sheriff’s Office Resource Deputy Jeff Merry. “I love the fact we are all collaborating together to create a uniform command for Sun City Center, which enables us to be more prepared and able to respond should the need arise.”

The Sun City Center Emergency Squad hosted the May 17 meeting, which included disaster plan updates by representatives of the following organizations:

The Hillsborough County Fire Department could not attend.